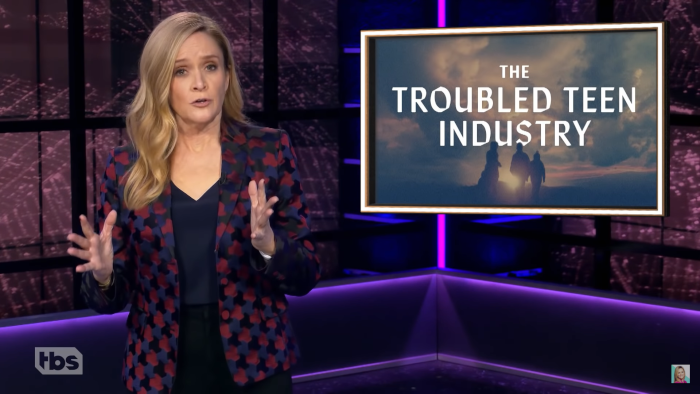 Samantha Bee Takes On The Horrors Of The Troubled Teen Industry

I’m a new dad to two beautiful twin boys. As they grow, I’m going to raise them with love and compassion. Everything won’t always go according to plan, but my wife and I will do our best. Even then, there’s still the chance my boys will be “troubled.” It happens to even the most well-intentioned parents. Some people get so desperate they end up turning to alternative methods of discipline. Boarding schools, wilderness retreats, and other “tough love” institutions present themselves as being helpful. According to Samantha Bee, they can cause more harm than they solve.

In the latest episode of Full Frontal with Samantha Bee, the host explored the Dr. Phil-driven business of child abuse. These institutions have little to no oversight. They make money off of “tough love,” which ends up being physical and/or mental abuse. Despite the government being aware of these abuses, nothing has been done to stop them, and let’s be honest, it’s not like this is a new problem.

When I was growing up, every movie or TV show I watched about a rambunctious teen featured them threatened with military school. A boarding school where they would go and get straightened out. By military officers. It was often presented as a joke but never as a good thing. More often than not, it wasn’t even parents who were at their wit’s end. It was instead those who were disconnected from their children. Unless they’re sent to live with your Auntie and Uncle in Bel-Air, parents sending away their children is rarely a good thing.

This segment hit me hard. I don’t envy the parents who think their only choice is to send their kids to some god-forsaken child ranch. I hope that I never feel even the slightest inclination to do the same. Maybe I’ll start a show where I pretend to be a psychologist. But instead of having troubled kids abducted in their own homes in the middle of the night, I’ll offer hot cocoa, a shoulder to lean on, and an ear for listening. I’ll be the anti-Dr. Phil.