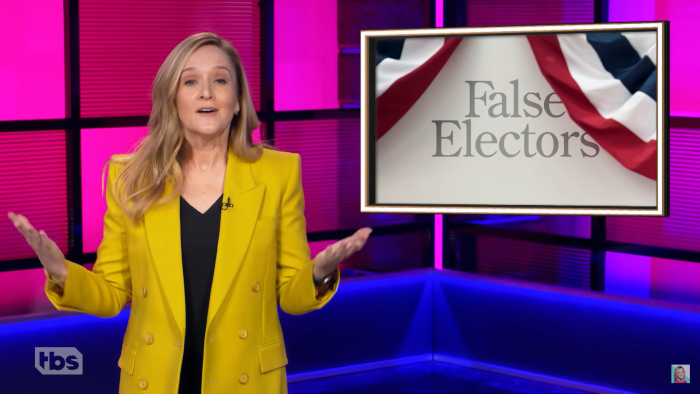 Full Frontal: With Samantha Bee kicked off its seventh season last night. Surely after seven years, things have calmed down enough that Bee didn’t have to cover anything too crazy. After all this time, I bet she got to have a nice, quiet premiere. No crazy stories or plots to overthrow the government for as far as the eye can see. Yep, just a totally normal time.

Just kidding, and by “kidding” I mean “active denial.”

Bee started off her show by going over the several plots by the GOP to overturn the 2020 election. It turns out that they took some illegal steps in their efforts to end democracy. Who knew? We knew. The Republican party says the quiet part loud so often it should be surprising that they get away with anything. Instead, we have to watch them speak openly about undermining the Democratic process, and then get a stern talking to. Or, in some cases, a stern singing to.

During her segment, Bee brings up the fake electors part of the GOP’s plan. They wanted to submit forms signed by people claiming to be electors who were, in fact, not electors. Not only do we have the forged paperwork, but there is also footage of the people at fault signing it! We have video evidence of the crime! Guess how many of the people in the video have faced consequences. If you guessed higher than zero, I admire your optimism.

It’s safe to say that if Republicans don’t get in trouble for what they are doing, they will just try it again. Why wouldn’t they? Something has to be done to stop them. So, my question is, do any of you have an in with the cast of Hamilton?