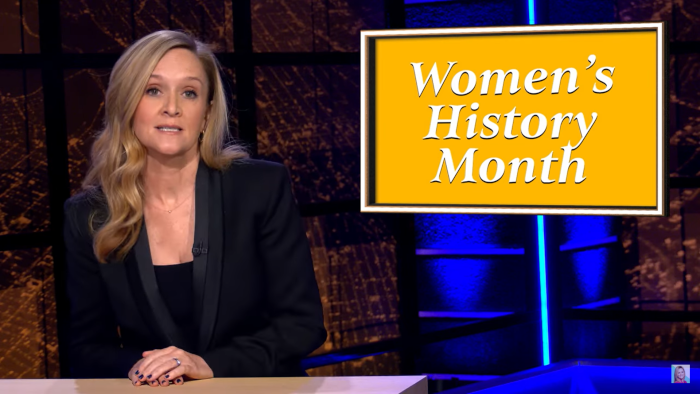 As social causes become trendier, businesses will attempt to take advantage. Look no further than International Women’s Day. It occurred this last Tuesday and gave way to a slew of businesses posting on social media about the women who work for them. It seems nice at first until another Twitter account comes along to show that, even if these businesses do employ women, they pay them less. Seriously, follow the Gender Pay Gap Bot on Twitter.

In this organisation, women's median hourly pay is 59% lower than men's. https://t.co/9y8o6BhzxG

Like Mel Gibson in the year 2000, these businesses think they know what women want. They should be asking women directly. That’s what the folks at Full Frontal with Samantha Bee did. The results are nothing short of spectacular. Bee gathered a star-studded group of hilarious women (Alexandra Grey, Mamrie Hart, Emma Pasarow, Meredith Salenger, Lauren Ash, Grace Lynn Kung, Grace Helbig, Caterina Scorsone) and asked them what they want for Women’s History Month. I won’t recount their answers here. That would be missing the point. I will say that you should watch it and probably take notes.

There’s something to be said for the sincerity of this sketch. It reaches a level that few businesses will ever achieve. Some do the right thing, and that’s great. They pay women equally and treat them fairly, but those kinds of places are still the minority. So, it should come as no surprise that the gestures they make to show support one month out of the year feel hollow. This bit has women speaking from the heart. They’re funny, heartfelt, and blunt. You won’t get that from an underpaid social media manager.

What can you do to support women during Women’s History Month? Ask women! Something so simple it’s amazing that people still find a way to f*** it up.