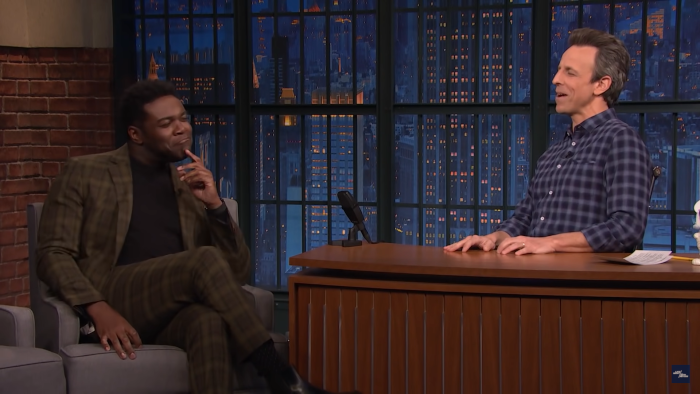 Sam Richardson Charms The Pants Off Of Seth Meyers

It’s always nice to see actors you like succeed. They might start with a small role here and there. Then, they get something bigger, but maybe it doesn’t get noticed as much as it should. You find yourself saying, “Have you seen this?” You want everyone else to see what you see before the person you like becomes a household name. For me, that person is Sam Richardson.

I first noticed Richardson on the show Veep, playing the amazing Richard Splett. Splett was a good person in a profession that breeds assholes. Richardson played the role so well that he managed to steal scenes from a cast made of scene-stealers. Then there was his tragically short-lived Comedy Central show Detroiters. A hilarious comedy, co-created with Tim Robinson, about Detroit ad men. It was an incredible show that should still be on the air.

Now, it feels like the Sam Richardson name is finally breaking into the mainstream. He had a wonderful, multi-episode arc on Ted Lasso. He got his own poster for the Christ Pratt vehicle The Tomorrow War. He has a starring role in a new Apple+ Murder/Mystery/Comedy show The Afterparty. He even made an impression in the horror/comedy scene this year with the hilarious Werewolves Within.

The era of Sam Richardson is finally happening, and he wears it well. Sitting across from Seth Meyers in a fanTAStic suit, charming Meyers and his audience with his quick wit and big smile. That’s where I want to see Sam Richardson! It feels right. The dude is a star and it finally feels like everyone is taking notice.