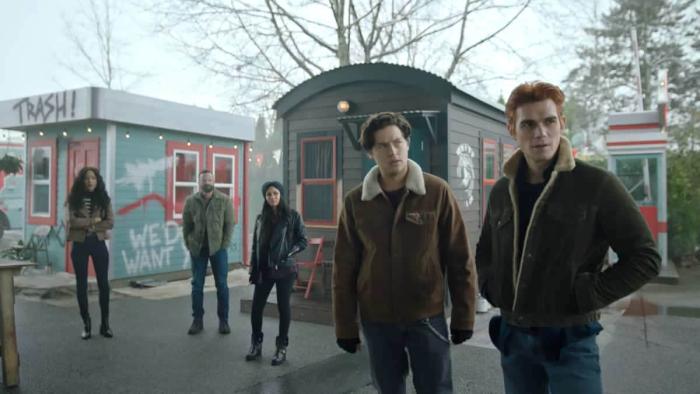 Previously on: A bomb in Archie’s house not only destroys a pocket universe called Rivervale that is populated by the same characters but gives Archie, Betty, and Jughead superpowers. Veronica took a hit out on her father, Hiram, who was shot in the back of the head and left in a shallow grave. An ancestor of Cheryl Blossom has inhabited her body and had plans to remake Riverdale, but was thwarted by her crush on Toni.

Where We Are Now: It turns out that Jughead doesn’t need his hearing anymore because now he can read people’s minds. Meanwhile, an anonymous article in the Riverdale newspaper — that we soon learn was written by Percival Pickens — upends the town by targeting the unhoused people in “Sketch Alley” as well as Veronica and Reggie’s illegal casino, The Babylonium.

At a city council meeting, where Percival admits to writing the article, he also argues that the unhoused should be bused out of town. Jughead reads minds and can tell that this is a popular idea among the outwardly progressive townspeople. Archie, nevertheless, comes up with an alternate plan: He and his construction company will build all the shelterless people in Sketch Alley their own little miniature houses. His construction company offers to do the work for free, and he gets Toni — the leader of the Serpents gang — and Tabitha, the owner of Pop’s (along with her father), to underwrite the project. Archie also says that Benjamin Moore would be donating the paint, which is a weird bit of product placement.

While Andrews Construction is building the houses, one unhoused man bashes Kevin in the head with a hammer. As it turns out, however, the unhoused individual did so under the orders of Percival, who has the ability to control minds. Although Alice — a city councilor, the editor of the local paper, and now the local Karen — tries to stop the project in light of the violence, Archie moves ahead. However, before Archie can get his miniature housing project fully operational, Percival uses his mind-control abilities to persuade all the unhoused folks to leave town.

Elsewhere, in light of the article, Veronica decides that she wants to take her casino legit. This lasts half an episode because not only does Reggie inform her that doing so would be unprofitable but a player in her casino — again, under Percival’s mind control — hangs himself. After Alice tells her that she won’t approve of all the permits needed to go legit unless Veronica takes a step back from her casino, Veronica says f—k it, and decides to be as crooked as her father.

In the Blossom home, Nana-Rose — locked away by Abigail last week — advises Britta on how to retrieve Cheryl’s soul from her body, now inhabited by Abigail. She just has to fall asleep next to Chery’s body and enter into a dreamscape, where Cheryl’s mother, Penelope, — in full Mommy Dearest mode — is tormenting Cheryl. In the dreamscape, Britta convinces Cheryl that her mother is not real, which gives Cheryl the confidence to, presumably, kick Abigail out of her body in the next episode.

Finally, Betty returns at the end of the episode. She had skipped town in search of the Trash Bag Killer, but she lost him somewhere in Maine. Betty is wearing sunglasses and tells Archie that a side effect of her superpower — the ability to see the auras of people — is that she can no longer look at light without getting a migraine.

How Many Main Cast Members Share Screentime Together? It’s the usual mix: Archie has scenes separately with Betty and Jughead, but none of the rest of the main cast share any scenes together.