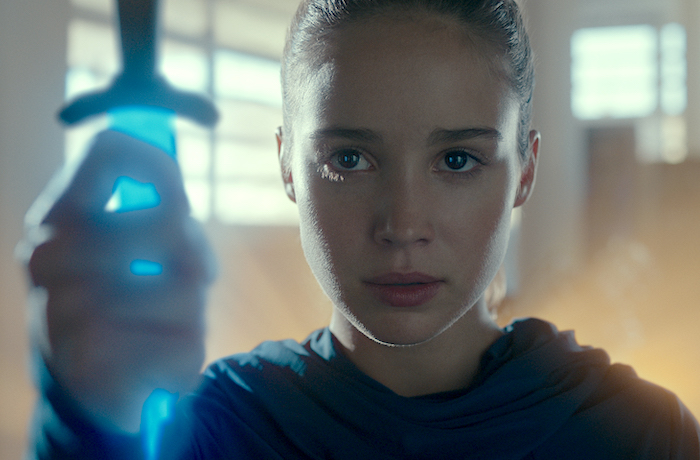 New Netflix series Warrior Nun follows an order of demon-fighting nuns lead by a “halo bearer” bestowed with superpowers by an angelic relic made of a magical metal unsurprisingly named Divinium. It is also infuriatingly dull. The premiere opens with the death of halo bearer Sister Shannon Masters (Melina Matthews). The Divinium halo chooses a rather surprising new master, resurrecting the recently deceased 19-year-old nobody Ava (Alba Baptista) instead of choosing any of the surviving members of the Order of the Cruciform Sword. An orphan who spent most of her life wasting away in a Catholic orphanage after an accident left her paralyzed from the neck down, Ava unsurprisingly has little fondness for nuns. She opts for getting out of dodge and taking full advantage of her new lease on life without looking the gift horse in the mouth.

I find myself growing angry as I write this synopsis because it sounds awesome. Or like something that, if not good, should at the very least be entertainingly chaotic. It is not. While admittedly there are limits and exceptions to the classic storytelling advice of “show don’t tell,” it turns out the saying is popular for a good reason. Don’t take my word for it if you’re skeptical, just try watching an episode of Warrior Nun, which only deserves to be viewed in intro screenwriting courses as a cautionary tale.

Warrior Nun is the sort of show that tells you the hard-ass Mother Superion (Sylvia De Fanti) terrorizes her subordinates not because she doesn’t care, but because she “cares too much.” And no, it does not demonstrate this through a trail of clues that accumulate over time or anything that would require, god forbid, half an ounce of creativity, but via a mind-numbingly dull conversation that has absolutely no right to exist. Another character confronts Superion and then proceeds to monologue the woman’s own motives directly at her. That’s it, that’s the scene. There’s literally no reason an actual human person would ever do this. It’s pure exposition dump that doesn’t even bother trying to disguise itself as anything else.

To be clear, this mind-numbing scene isn’t an outlier. The entire show is like this. It’s ten episodes of exposition dump. Somehow the series consistently manages to keep shoveling on backstory delivered in the most boring way possible straight through from beginning to end. I don’t think I’ve ever encountered anything quite like it in my life, but the novelty factor doesn’t spare it from being an utter slog. The only respite comes in the form of a dozen or so mediocre fight scenes, but honestly calling these a “respite” is a stretch. It’s swapping out watching paint dry for watching grass grow.

Ava is the most terribly written series protagonist I have encountered in a hot minute. She’s painfully juvenile, not in the sense that her character feels especially young, but instead written by someone who is. She feels pulled right out of the world of self-insert fanfiction chiefly populated by 15-year-old authors who insecurely warn readers up front that they’re “not good at summaries.” If you understand this reference, you know exactly what sort of steaming garbage you’re in for, if you don’t, that’s fine, all you need to know is that it’s very not good. Ava always feels about one breath away from proudly proclaiming she’s “not like other girls” because she’s the brainchild of someone yet to hone the critical thinking skills needed to realize how inherently misogynistic such a conception of a “strong female lead” is. And she’s “sassy,” by which I mean she responds to someone calling her “fashion-crippled” by retorting that she prefers “fashion disabled.”

I would get into the supporting characters but that would mean giving them more thought than anyone involved in developing this series appears to, so suffice it to say the less said the better, and let’s leave it at that. Having not read the Warrior Nun Areala comics from which this series was adapted, I can’t speak to whether this is a case of bad content adaptation failed to save or promising source material that got desecrated. Regardless, something went terribly wrong somewhere along the way.

As far as acting goes, across the board lines are often delivered with a wooden solemnity or in a mumbled rush that might indicate limited range, embarrassment over terrible dialogue (the series’ sense of humor extends to lame puns and that’s literally it), or some combination thereof. However, having very limited familiarity with most of the cast’s filmographies beyond Warrior Nun, I’ll just give them the benefit of the doubt on this one. That said, there are places where it definitely feels an actor willing to lean enthusiastically into the trash and bring some chaotic energy to the table—a Nic Cage type—could have at least given this corpse of a series some spark of life. Unfortunately, no such hero rises to the occasion.

Struck by the idea that Warrior Nun might be more palatable inebriated, I at one point drank several glasses of wine in the name of science, but my hopeful hypothesis was dashed. The degree to which this series manages to drain its bonkers concept of any iota of joy is genuinely astounding. The only time I laughed throughout the entire season is a moment in the finale where a terminally ill little boy, who is precocious and wise beyond his years because Warrior Nun consistently goes for a full house in cliché bingo, wriggles free of his mother’s clutches and runs towards an ominously shimmering portal shouting, “I’m tired of being in prison!” My sentiments exactly, kid.

The writing is consistently the worst part of it, but Warrior Nun hardly excels on other fronts either. Visually, it’s a total snore. The demons are the most generic sort of volcanic-looking fire monsters. I wouldn’t be able to pick them out of a lineup. Tl;dr, the Balrog did it better. The cinematography is a study in mediocrity utterly lacking any sort of personality or vivacity.

Much like Ava, Warrior Nun is dead on arrival. Unlike Ava, no magical artifact comes along to revive it. Did anyone involved in making this series care about it in any capacity beyond securing a paycheck? If they did it really doesn’t come through, and certainly doesn’t present a compelling case for why a viewer should even try to give a sh*t.

Technically the season ends on a cliff hanger, but seeing the final credits appear does not inspire thoughts of “what happens next?!” so much as “oh thank god.” If you are looking for irreverent super-powered fun featuring Catholic imagery, I recommend checking out The Velocipastor, which is included with Amazon Prime, and not watching Warrior Nun under any circumstances. I traversed this bog so that others might not have to and would prefer this sacrifice to not be in vain.

I would say I hope Warrior Nun doesn’t get renewed for a second season, only in keeping with the theme of 2020 I’m sure it will be.