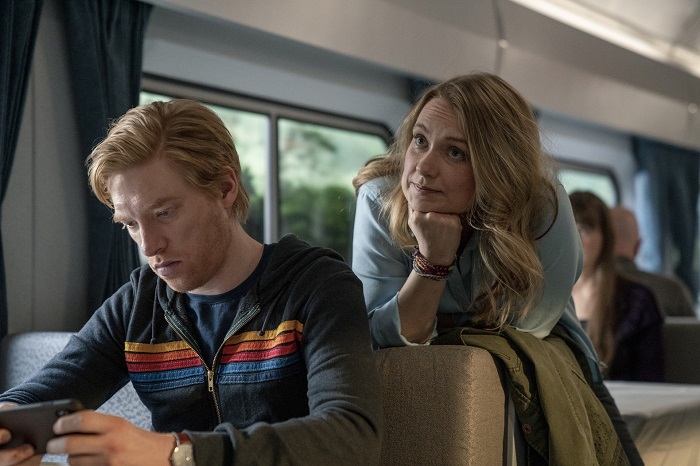 Review: Merritt Wever and Domhnall Gleeson Smolder in ‘Run,’ But the Show’s Concept of Villainy Threatens to Derail Their Chemistry

We all need some escapism right now, and Run couldn’t come at a better time. The HBO miniseries from Vicky Jones (frequent collaborator of Phoebe Waller-Bridge; the women have worked on Crashing, Fleabag, and Killing Eve together) checks a number of enjoyable-TV boxes—attractive and charming leads; mysterious pasts for its main characters; some really hysterical moments and tightly written scripts—and there’s pervasive zaniness and sexiness here. A lot of this is really good! Unfortunately, that makes the show’s villain problem glaring in comparison. 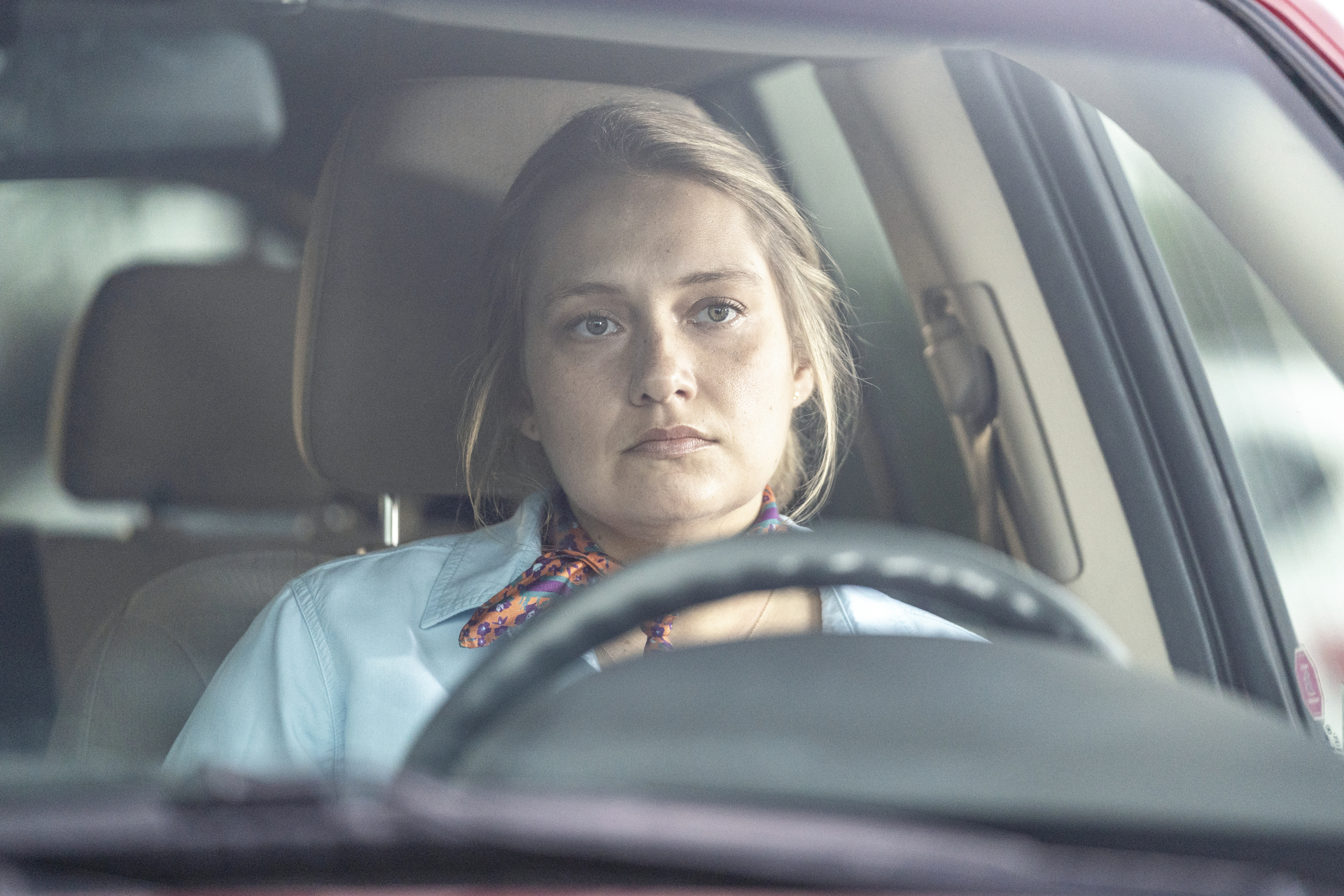 Run focuses on former college sweethearts Ruby (Merritt Wever, great and hot) and Billy (Domhnall Gleeson, hot and great) who reconnect after more than a decade apart. The impetus is an all-caps text message from Billy to Ruby—“RUN”—that she ponders for a minute or so before texting it back to him and springing into action. She peels out of a strip-mall parking lot. She goes directly to an airport. She buys a ticket to New York City, sprints through the train station, and eventually meets up with Billy. The look Ruby gives him is hungry, and honestly, who wouldn’t.

Ruby overhears when she sidles up to Billy a frantically whispered lie by him to whoever he’s on the phone with (we see from his texts and emails that it’s a woman named Fiona), and that mistruth sets off a cascade of hidden information between the two. We know that Ruby is married and has two kids; we know that Billy, an up-and-coming motivational speaker, is fleeing from the effects of a viral video; the former lovers, though, don’t share those facts with each other. Instead, much of the premiere episode “Run” is a seductive tête-à-tête between the two: They pretend not to know each other on the train, amusing an older couple played by Annie Golden and Stephen McKinley Henderson (of Devs); they go to the bathroom separately to masturbate, inspired by the thrill of their shared escape (Gleeson’s growled “That fucking woman” before he undoes his zipper is pretty hot); they try to maneuver their bodies into the tight quarters of a private sleeping compartment. There is obviously the shadow hovering of whatever led them to this place, but this initial half-hour is mostly just witty, cutting banter, heated glances, and a whole lot of sexual tension that Wever and Gleeson pull off. 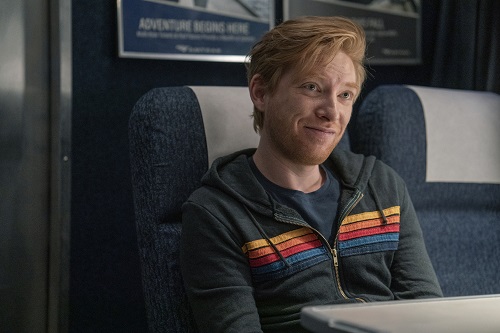 In coming episodes (I’ve seen through the fifth episode, “Jump”), Run gets a little more complicated, and I must admit that I missed the chaotic energy of this premiere as the series progresses. Jones writes in flashbacks that director Kate Dennis incorporates quite fluidly, and they give us more context about who Ruby and Billy were years ago: the desperation Ruby felt when she decided to get married, the dissatisfaction Billy feels with his career as a motivational speaker, the way the two of them never seem to be on the same page about their malaise or about each other. Those elements—the way you can pine for someone and a certain time, and convince yourself that everything was better than—are relatable and recognizable. Haven’t we all fantasized about what could have been? I certainly know I’ve daydreamed about the choice to disappear. But what Run doesn’t quite complicate in its first five episodes is whether Billy and Ruby were really as great as the other remembers, or if their current lives are so bleak that they’re just caught up in nostalgia. And because the show instead leans into the “everything about their lives right now sucks” angle, I felt increasingly removed from the narrative—because the villains of this story then become Billy’s fame and Ruby’s wealth, and in this economy, that’s really what we’re going with?

I am an apologist for certain kinds of “rich-people problems” cinema and TV; I did, after all, recap Succession for this very website. But the show simplifies Ruby’s and Billy’s problems to such an extent that they fall flat; that’s not to say our protagonists should be lily-pure for us to like them, but that what they’re running from has to have meaning. Instead, we get Ruby’s husband Laurence (in a bit of smart casting, played by Rich Sommer, who you might remember as the intolerable Harry Crane from Mad Men) and Billy’s Fiona (to reveal the actress would be a spoiler, so I won’t) as one-dimensional villains who are the sole sources of Ruby’s and Billy’s unhappiness. That flatness doesn’t add weight to Billy’s and Ruby’s choice to run, but the show also doesn’t really reckon with the characters’ selfishness. There’s a little bit of a void where their motivations should be. (If I told you that the show Run reminds me most of in this way is Big Little Lies, would that be bad?) 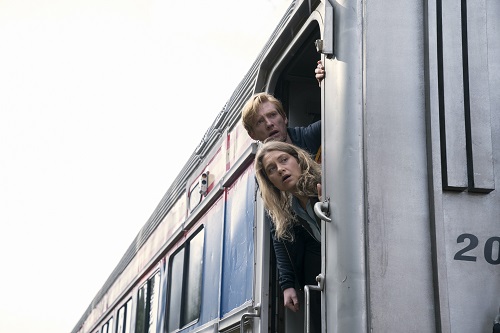 The real draws for Run are Wever and Gleeson, and they are just stupendous: We’re used to seeing Wever as a no-bullshit, get-it-done type (think of her in The Walking Dead or Godless), but her work here is more in line with her supporting role as Scarlett Johansson’s sister in Marriage Story. She’s loose, she’s flirty, she’s pointed, she’s frustrated. Wever’s performance reminds me of Elisabeth Moss’s work in Mad Men or The Invisible Man in that she so effectively shifts between microscopic differences in feeling in extremely compressed periods of time; Ruby’s needling of Billy lands so hard because you can tell how much she has pinned to this relationship, and how much of herself she doesn’t like anymore. “I’m not the same person I used to be,” she says to Billy, and he’s not sure how to respond—sort of because Billy is an idiot, the guy who admits to Ruby that he didn’t initially want to have sex with her because the idea of having sex with a mom grosses him out. But Gleeson adds a lot of humanism to Billy’s dickishness: He’s often clueless but not entirely malevolent, and you get a real lost-boy vibe from how often he turns to Ruby for direction. His cocky grin is kryptonite, and then in a later episode, when Gleeson actually flashes a genuine, outside-of-his-character smile during a clumsy make-out scene, it’s like magic. Wever and Gleeson well capture the messy dynamics of Ruby’s and Billy’s relationship, even as the story moves them in a direction that I don’t entirely buy.

“Who does this? What will I say?” Ruby wonders, and Run is at its best when it lets Wever and Gleeson probe at the history of their relationship and try to figure out what they are, if anything, to each other in the present day. That partnership works. How Run broadens that story—backstories that aren’t particularly unique; narrative development that relies too much on things happening to these characters rather than their own proactive action—isn’t as successful, but for its lead performances alone, Run remains watchable.