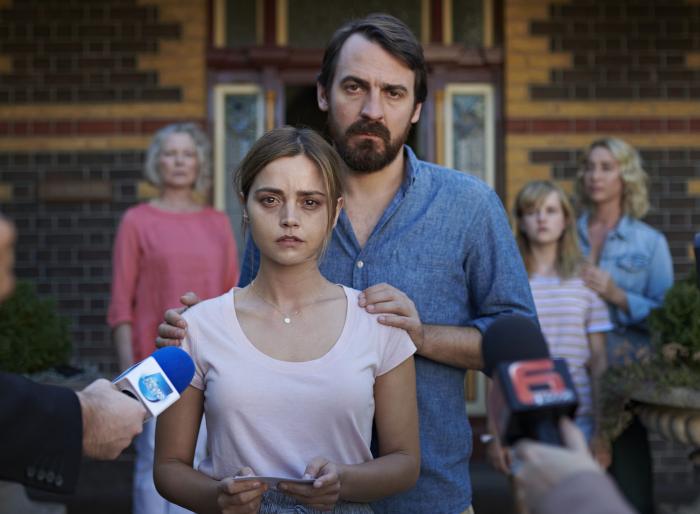 Review: SundanceTV's Gaslighting Drama 'The Cry' Will Mess You Up

The Cry is a four-part miniseries starring Doctor Who’s Jenna Coleman that has already aired in the UK and in Australia (the two places where the series is set) and is now airing in America on SundanceTV. It is a goddamn emotional journey. It’s the kind of series that looks like it’s going to punch you in the nose, but as soon as you lean back to dodge the blow, it kicks you in the shin, yanks down your pants, and takes your lunch money. As you start to pull your pants back up and collect yourself, it comes back around and finally punches you in the nose.

Based on the novel of the same name from Helen FitzGerald, The Cry is kind of like a fictional Dear Zachary. Every time you think you are about to witness the worst thing that could possibly happen, you’re hit with a revelation that is even worse. It gets to the point where it’s almost but not quite comical, but I will say this: The searing trauma is muted by the plot machinations, which is to say, the twists and turns are slightly more entertaining than the emotional damage they inflict.

Straight-up front: The baby dies. “The Cry,” from the title of the series, refers to the cry of baby Noah, who wails and wails and wails, as Joanna (Jenna Coleman) seeks to quiet and calm the infant. But the series both is and is not about the death of the baby. It’s more of a gaslighting drama.

Told from various intercutting timelines, we essentially see three storylines running concurrently about a man named Alistair (Ewen Leslie), an Australian working public relations in Scotland, courting Joanna; Joanna trying in vain to quiet her crying baby; Joanna on trial for murder. Oh, it’s going to be that kind of drama, you think. The crying is going to slowly drive Joanna mad until she takes the life of her infant son.

Without getting into it too much, in the courtship phase we discover that Joanna didn’t know that Alistair was married and had a teenage daughter until his wife and teenage daughter walk in on them in bed together. Months later, as Joanna is dealing with the never-ending cries of the baby, they have to fly to Australia to visit Alistair’s daughter, after his ex-wife gets custody in the divorce. It’s a long flight with a crying baby. Everyone on the plane is furious with the parents, and Joanna and Alistair are at the end of their ropes. Once they arrive in Australia and settle in, however, things seem to calm until they go to a small store to pick up some groceries. Joanna waits in the car with the baby but runs in quickly to yell to her husband that she needs feminine products. When she returns to the car, the baby is gone.

That’s the opening episode, and that’s as much as I’m willing to say so as not to spoil the rest of the series. It is not what it seems, however. We learn over the course of the four episodes that Alistair is not the adoring man (who banged his girlfriend in his wife’s home) that we think he is. Ahem. He is a controlling dickhead and he’s very good at media spin, which becomes a valuable asset when their missing child becomes a national news story. He uses Joanna’s grief to manipulate and coerce her into supporting a narrative benefiting him personally, although the viewer isn’t immediately aware of that, either, so the series in some ways gaslights us, too.

The Cry can drag a little at times, and — per the binge-watching model — the big twists and turns tend to come at the end of each episode. It is riveting television, stuck firmly between prestige and trash, like a Lifetime movie produced by HBO. I ended up watching the entire series in one night because there was no way I was going to bed without knowing how it ended. SundanceTV watchers, however, will have to wait eight more days to see the end, because episode three of the weekly series doesn’t air until tomorrow night.

← Bernie Sanders' Critique of the Media is Not the Same As Donald Trump's Attacks Against It | Meghan McCain Made Marie Yovanovitch's Impeachment Testimony All About Meghan McCain, Naturally →