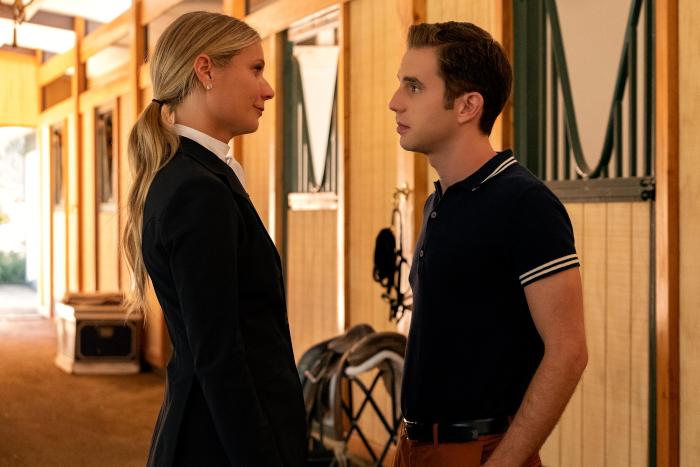 Review: Netflix's 'The Politician' is an Occasionally Endearing and Often Entertaining Sweaty Mess

Ben Platt plays Payton Hobart, a high-school senior essentially using his race for student-council president as a springboard to be the President of the United States. He’s 90% ambition and 10% desperation, a kid who has completely mapped out his entire run to the White House, including his support staff and his First Lady, Alice Charles (Julia Schlaepfer), who is every bit as ambitious as Hobart. There’s not an ounce of authenticity about Payton, although there is something weirdly sympathetic about a character trying so hard to be something that does not come naturally to him.

It does come naturally, however, to River Barkley (David Corenswet), Payton’s popular, confident, good-looking, and charming opponent, who appears to lead the perfect life with the perfect girlfriend, Astrid (Lucy Boynton). In the student-council president debate, however, River reveals that he nearly killed himself the year before, and even in that regard, River wins the sympathies of the student body and puts himself clearly in the lead.

Payton, however, believes he can shrewdly make up the difference if only he picks the right VP candidate, so he reaches out to Infinity Jackson (Zoey Deutch), who has cancer, in the hopes of earning some of the sympathy votes. Infinity reads his intentions and declines, much to the dismay of her opportunistic grandmother, Dusty Jackon (Jessica Lange), who regularly exploits Infinity’s cancer for free trips, meals, and other perks.

The student-council race takes a turn when River — who it turns out had also had a fling with Payton during the summer before — kills himself by gunshot in front of Payton. During a school assembly, Payton performs a heartbreaking rendition of Joni Mitchell’s “The River” — the first truly humanizing moment for his character — and all but seals the race for student-body President until River’s girlfriend, Astrid, decides to run in his place. Payton’s conniving girlfriend, Alice, surmises that the only way to elevate her boyfriend’s numbers is to fake an affair and break-up with him to earn the sympathy of the student body. It works.

This all happens in the opening episode of The Politician, which is how you know you’re watching a Ryan Murphy series. I didn’t even include the introduction of Payton’s mother, Georgina Hobart (Gwyneth Paltrow), a character that can only be described as “insanely Gwyneth.” I was surprised, however, by how much life was left in a student-council president’s race that had already featured the suicide of the frontrunner. Granted, the series never stops being a Ryan Murphy show. There are elements of Election and Glee, and it is filmed, at times, like a Wes Anderson movie, and it goes off the rails more than a few times. Thematically, though, it always returns to Payton and his struggle to square his humanity with his ambition.

There’s not a subtle goddamn moment in the entire season, but that struggle is at times a fascinating one, particularly when Ryan Murphy gets out of his own way long enough to let Ben Platt’s character wrestle with his internal demons. Platt is weirdly perfect for the role — calculating, vulnerable, insecure, and full of desperation, but occasionally, we see the person beneath that facade and understand that winning this election — that becoming the President of the United States — is about being accepted, because he believes his only value as a human is in his ability to win an election.

There’s also something refreshingly old-school about The Politician in that, when a candidate screws up, there are political consequences, even when that screw-up is something as absurd as Payton losing the LGBTQ vote when his running mate — who may or may not have cancer — calls someone a “buttmunch.” From a political junkie standpoint, it’s fun to see the two candidate scheme against one another. It is a Ryan Murphy series, though, so those schemes eventually take the form of attempted murder. It’s satire, and yet in this political environment, there’s nothing particularly unrealistic about the lengths teenagers might go to win an election, even if it is only for student-council president. What feels more unrealistic, however, is how much words and actions actually matter here, although I think in that respect, Murphy is taking his cues from social-media culture.

I’m probably making The Politician sound better than it is. It’s not a particularly good series — although, queuing up Bette Midler and Judith Light for the second season, which is already filming, is enticing — but there are a lot of great ideas and a few good characters swirling around in what is otherwise a muddled, try-hard mess. It’s those ideas and characters — and Platt’s rendition of “The River,” as well as his more grounded performance in the season’s final episode — that kept me hitting “next episode” over and over until I found myself craving a second season of a series I really didn’t like all that much. Honestly, it doesn’t make it that different than most Ryan Murphy series, only this one I could at least binge all at once.

← Why Are Y'all Stumping 'Joker' When 'The Invisible Man' Was Here All Along? | 5 Shows After Dark: 'Nancy Drew' Premiere The CW, 'South Park' 300th Episode →