Review: John Grisham Meets 'This Is Us' In the Treacly 'Bluff City Law'

There is nothing particularly interesting, original or unique about NBC’s new legal drama, Bluff City Law. It’s as generic as they come, save for its setting, Memphis, which I suspect is meant to evoke the work of John Grisham. In the pilot episode, at least, there is also a Grisham-inspired big showy trial against a chemical manufacturer responsible for giving a loving father cancer after he risked his own life to prevent the chemical from reaching a well that would have sickened a bunch of school children (they really pile it on thick). Despite coming from Dick Wolf, however, Bluff City Law is less interested in legal issues than it is in eliciting tears, and even in that regard, it fails miserably. It’s more insulting than it is touching.

Caitlin McGee is Sydney Strait, a young and impressive lawyer with a host of messy personal issues. She’s also estranged from her father, Elijah Strait, a big-shot attorney played by Jimmy Smits. However, the death of Sydney’s mom and Elijah’s wife brings the two back together, and Syndey eventually agrees to rejoin her father’s firm, where they will make big impassioned speeches full of cliches and laughably long pregnant pauses, speak to the “moral arc of the universe,” whisper shout at their clients, and yell into mirrors for emotional effect. The two have an uneasy relationship owed to the fact that Elijah frequently cheated on his wife, which results in the revelation at the end of the episode that Elijah’s investigator is also his son and the half brother that Sydney never knew she had.

Bluff City Law very much wants to be the This Is Us of legal dramas, but it’s missing whatever magical alchemy allows This Is Us to occasionally transcend the material (I believe the magical alchemy in This Is Us is called “Sterling K. Brown” and “Susan Kelechi Watson”). Bluff City Law, meanwhile, hits the tear ducts so direct and so forcefully that it’s more likely to leave you with a black-eye than a case of the weeps. To wit: This is the sticky note Elijah passes to his daughter after they win their first trial together (Warning: You may dry heave): 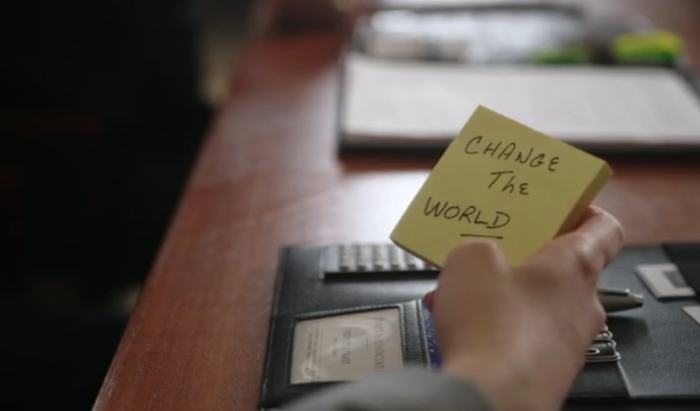 The writing is thin (it uses the phrase “but the truth is” multiple times), the characterization is unremarkable, and it doesn’t even bother to take advantage of either the steaminess or the seediness of Memphis. Why aren’t these characters sweating through their suits, for God’s sake? Do they have any idea what the humidity is like in Memphis?

It’s not that Bluff City Law is unwatchable. It’s that it’s not worth watching.