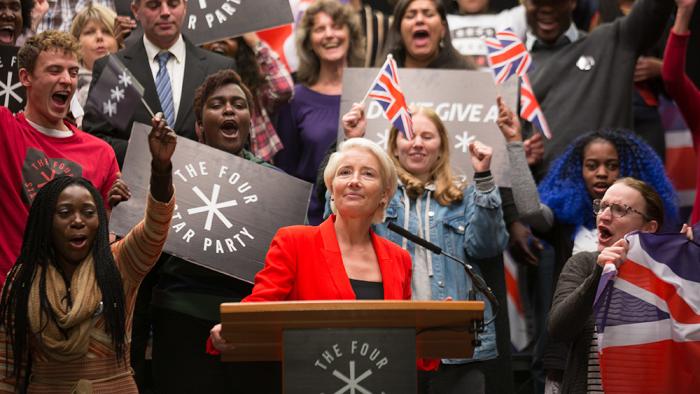 Review: HBO's Brilliant 'Years and Years' Depicts Our All Too Realistic Future

Years and Years, a co-production between BBC and HBO from Russell T. Davies (the guy behind the best years of Doctor Who) is a drama series, starring a bunch of British actors you recognize from all those other British shows (Rory Kinnear from Black Mirror, Russel Tovey from Being Human, Anne Reid from Coronation Street, T’Nia Miller from Doctor Who, and Jessica Hynes from all of them), plus Emma Thompson, who plays a Trumpian political figure. Basically, the series examines the next 10 or 12 years through the prism of one British family, as Trump wins reelection in 2020 and Mike Pence wins in 2024 and the rest of Europe falls to reactionary authoritarian governments, banks fail, and climate change forces hundreds of thousands of immigrants north.

Sounds bleak and depressing, right? A little dystopic? Well, it’s not, and that’s kind of the point of Years and Years. It illustrates how easy it can be to normalize all of this. It all just becomes part of the fabric of this family’s life: Relationships still happen, people still fall in love, husbands still cheat on their spouses, and life moves on, at least until it gets to the point where things get so extreme that it’s no longer possible to normalize it (for the record, that moment comes at the end of the devastating fourth episode).

Without giving too much away in this all-too-real fictional universe, Years and Years is focused on the Bisme-Lyons, a conventional middle-class British family. In the opening years, the biggest problem they encounter is the fact that Bethany, the oldest daughter of Stephen (Rory Kinnear) and Celeste (T’Nia Miller), wants to be “trans-human.” She’s so obsessed with technology that she wants to upload herself into the cloud and live forever (a possibility that becomes more real as the series progresses). Meanwhile, Stephen is a successful banker until his bank fails, forcing him to join the gig economy and work 10-12 jobs. In the wake of some of Stephen’s indiscretions, Celeste also has to keep the family together under the roof of Stephen’s mother, Muriel (Anne Reid), a tough old broad, so to speak, who has seen it all and the only character who can voice real perspective to all the changes made this century.

Russell Tovey plays the brother, a gay housing officer who falls in love with a Ukrainian refugee, Viktor (Maxim Baldry), fleeing his home country because homosexuality is not permitted (it’s not too much of a spoiler to say that he spends the first half of the series relocating from one European country to another in an attempt to outrun anti-gay governments). Rosie Lyons (Ruth Madeley) plays the youngest sister, who has spina bifida and does the best she can to roll with the punches after her job is outsourced to automation. Jessica Hynes plays Edith Lyons, a political activist who, well, let’s just say that her life is dramatically altered by one of Donald Trump’s temper tantrums.

Meanwhile, Emma Thompson plays Vivienne Rook MP, a sort of fringe, anti-immigrant political figure who endearingly “tells it like it is” all the way up the political ladder. The only unrealistic thing about Years and Years, in fact, may be that it takes so long for Britain to fall under the spell of a politician like Vivienne Rook, given the fact that Boris Johnson was elected Prime Minister just today. Some of the policies enacted by Rook years from now on the series are not much different than policies Trump and Johnson are trying to enact today.

Not everything about the future is horrifying, of course. The technological advancements are fun but completely realistic — implanting phones under our skin, for instance, or resolving macular degeneration with robotic eyes, plus everyone has Google home or an Alexa, only its in the walls and part of our everyday lives. But a lot of it is also realistically awful: Privatizing concentration camps for refugees, for example.

What’s both so comforting and so disquieting about Years and Years, however, is how this family makes do in the chaos of political change. It’s comforting because, as the world goes to hell, they’re still a family dealing with everyday family problems, and they still love each other. They occasionally bicker and fight about politics, but when it affects one of their own, they all come together.

And that’s how it happens. We make one little allowance every few weeks or months until it’s ten years later and we realize we’ve given it all away. We look around, and we see that Donald Trump is in his fourth term, that the only cable-news network still standing is Fox, that political opposition leaders are dead or in prison, and that our spouse lost her job for speaking out publicly against the Administration’s policies. Suddenly, we’re Russia. But we move on. We live. And hey! We’re still going to crowd around the TV that night with our family and watch the Queer Eye men give another country bumpkin a make-over. We’re a surprisingly malleable species, capable of adjusting to almost anything, and in some ways, that may lead to our ultimate downfall.