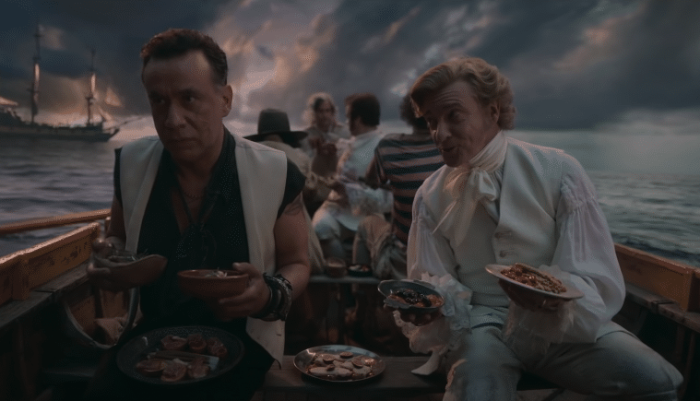 I often find myself thinking the same thing after watching the first episode of a sitcom: “Neat idea, but not sure how they’ll make it last.” Of course, that’s by design really. The “situation” at the heart of the situational comedy may seem slight — “Employees deal with a weird boss at paper supply company,” “Nerdy friends try to get girlfriends,” or the always applicable “Quirky friends hang out in New York City” — but it’s also broad enough to encompass endless complications. So it took me by surprise when I had the exact same thought after I watched the first episode of HBO Max’s latest comedy, Our Flag Means Death. The series, created by David Jenkins (People of Earth) with Taika Waititi serving as Exec Producer, co-star, and director of the pilot, centers on the adventures of a bumbling “gentleman pirate” named Stede Bonnet and his crew, who are all one bad day away from mutiny. Despite the show’s star power and pedigree, it’s ultimately just a slightly salty sitcom set on the high seas — and though HBO Max released the first three episodes, I didn’t feel like I had a firmer grasp on the material by the end of episode three than I had after the pilot. The performances are great, and there are some surprising guest star turns, but all in all I was prepared to come here and tell you this is a pleasantly fine show and nothing more.

Until I started reading about the life and death of the REAL Stede Bonnet, that is, and now I think I see the potential Jenkins recognized when he developed this story.

Rhys Darby, who was so perfectly inept as band manager Murray in Flight of the Concords, brings that same energy here to the equally out-of-his-depth Bonnet. Flashbacks hint at his backstory — a disapproving father, some schoolyard bullying, an unsatisfying marriage — but the show hasn’t quite put a pin in exactly why this sensitive gentleman decided a pirate’s life is for him as opposed to doing literally anything else. The clincher here isn’t just that he’s ill-suited to piracy (he prefers books, not bloodlust!), but that he has no idea just how terrible a pirate he is because he doesn’t seem to really understand what a pirate is supposed to do. Like murder! They murder! Regardless, Bonnet abandoned his family and his holdings, bought a ship and filled it with satin robes and his entire personal library, hired a colorful crew of miscreants, and set off to raid and pillage and whathaveyou.

At first, the series seems very focused on the pirate-ship-as-wacky-workplace aspect of the story, with Bonnet as a sort of posh Michael Scott getting in the way of his crew’s work with his inadequacy. Complicating matters is that they don’t know what to do about the fact that he pays them a salary regardless of whether they steal any booty or not. Some, like Buttons (Ewen Bremner, Trainspotting) and Oluwande (Samson Kayo, Truth Seekers), seem to appreciate that cozy position they’re in with a boss who relies wholly on their know-how. Others, like Black Pete (Matthew Maher, Captain Marvel) and John (Kristian Nairn, Hodor on GoT!), recognize Bonnet’s weakness and think it’s holding them back from bloody glory. Then there’s Jim, a.k.a. Bonifacia Jiminez, a female criminal hiding out as a male pirate (and played by gender nonbinary actor Vico Ortiz) who uses Bonnet’s stupidity to fly under the radar. All of them, however, realize that Bonnet’s leadership is likely to get them killed one day — and that becomes the episodic hook: Will The Gentleman Pirate Lead His Crew Into Disaster This Time?

The humor, though hardly revolutionary, finds some unique beats along the way, with a frequent target being toxic masculinity. Bonnet’s crew is reluctant to make their own pirate flag because they worry that sewing is too feminine, but they also hesitate to initiate their plans for mutiny because they really like the way Bonnet reads them bedtime stories. It all falls squarely in a sort of gently amusing chuckle zone most of the time. Where the show picks up steam, however, is when it applies complications to the formula. Rory Kinnear (Penny Dreadful) pops up as a British Naval officer and old childhood tormentor of Bonnet’s who boards Bonnet’s ship to say hello… because there’s *absolutely no way* Bonnet could be a pirate. Bonnet attempts to knock the man unconscious with a paperweight but accidentally kills him, and then Oluwande helps him cover it up so that it will look like an intentional murder to the rest of his crew, thus staving off their mutiny for another day. Then there’s a whole episode that keeps Rory Kinnear around as an angry figment of Bonnet’s imagination, his guilt personified with a knife through its eye and shouting obscenities. If THAT was what Our Flag Means Death was all about, just knifeface Rory Kinnear flipping off Rhys Darby, I’d be cool with it! When the crew gets stranded on an island, Bonnet is forced to stand trial before a tribal chief (Gary Farmer, Reservation Dogs) who is done letting white colonizers — not pirates! — pillage the land, only to be released because it’s obvious that Bonnet is too inept to be a threat to anybody. The third episode finds Bonnet heading to a pirate’s republic to make his big debut, only to nearly lose his nose to a polygamous pirate queen named Jackie (Leslie Jones, sheer perfection) and sold out to the Spanish Armada by one of her many husbands (Fred Armisen). There’s also the presence of the biggest, baddest pirate of them all, Blackbeard (Taika Waititi), who has caught wind of this so-called Gentleman Pirate and wants to check him out for himself… 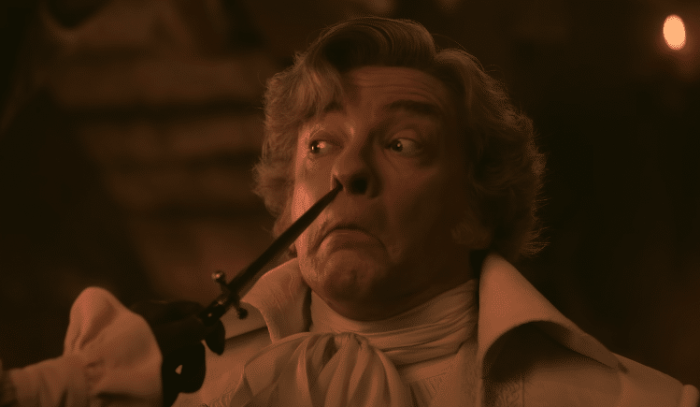 And here’s the thing: The real-life Stede Bonnet really did meet Blackbeard, after he was injured by the Spanish. Apparently, they ran together after Blackbeard convinced Bonnet to cede control of his ship until he recovered from his wounds. Actually, a lot of Our Flag Means Death is historically … well, perhaps not accurate but at least inspired. Nobody knows why Bonnet abandoned his life to become a pirate, but an unhappy marriage is one of the theories. He really did pay his crew a salary, which was unheard of at the time, and he had enough of a reputation for being inept that Blackbeard likely did seek him out to take advantage of him. His crew eventually left him to join Blackbeard, though Bonnet hung around as a sort of guest on the ship. Bonnet later sought a pardon for his crimes, only to discover that Blackbeard had stolen all their shared loot, which inspired him to return to piracy under an alias. Bonnet was executed for his crimes in 1718 — and since the show takes place in 1717, there’s a lot of backstabbing and betrayal it can cover in this short timespan. Knowing the stakes ahead for Stede Bonnet makes me a bit more invested in Our Flag Means Death, at least to see whether it remains a weird little historical sitcom or turns into something more. HBO Max seems to be doing that thing where they burn off a full 10-episode season in four weeks, so you can expect three new episodes next week, and two episodes a week after that. If nothing else, it’s a pleasant little diversion that promises more cameos in the weeks ahead.


← Sam Brinton Is the Future (And American Conservatism the Tragic Past) | Understanding Through Storytelling: Let's Not Get Too Mad About War Memes →