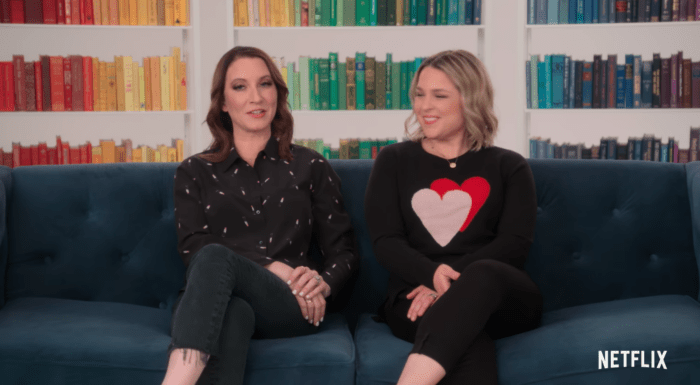 Review: ‘Get Organized With The Home Edit’ Is No Marie Kondo But It Will Do For Now

When I first started watching Get Organized, I thought of it as ‘Marie Kondo but with rainbows’; however, over time, that comparison started to make less sense. Sure, The Home Edit and Kondo have a lot in common: namely, the basic principles of having less stuff, and arranging that stuff in a way that looks nice. I guess those principles aren’t that groundbreaking when you think about the very nature of tidying up … But it’s where they differ that will determine if you might like Get Organized, and that goes deeper than rainbows.

This brings me to my first confession of this piece: I am a little bit obsessed with Marie Kondo. In fact, my wide-eyed KonMari zealotry has led to my sister worrying if I’m in a cult. Kondo’s just a nice person who has some tidying wisdom! It’s fine! I may cite Kondo’s books from time to time as if quoting scripture; I may have watched Tidying Up more times than I would care to admit; I may worry that she’ll find out I still haven’t conquered the papers category and be disappointed; but the KonMari method definitely isn’t a cult. Nope.

If it were a cult, I may have felt a little unease at watching Get Organized, as if cheating on ‘spark joy’ with rainbows, but as it happens, the first episode featured The Home Edit team organizing Reese Witherspoon’s memorabilia collection, and all that pink Legally Blonde goodness would have taken the edge off. And that’s the first big difference between the shows: Get Organized lets you have a nosy into the homes of a few celebrities, who look sad about how much stuff they have until Clea and Joanna put it into plastic containers. Difference 2: Kondo encourages you to ‘shop your home’ for drawer dividers and boxes, whereas The Home Edit is all about the products. So many acrylic stacking boxes and canisters… I would have had more conniptions about the plastic if the containers weren’t all lined up and labeled so neatly.

There are some closets — like Rachel Zoe’s — where you will gawp in disbelief about how many pairs of shoes she has and get into a little rage about first world problems, like ‘oh no, my closet’s too small for my Chanel collection’, or ‘all these Birkins take up so much space, I can’t even…’ However, if there’s a part of you that has secretly watched Keeping Up With The Kardashians and stopped for a moment to admire Khloe Kardashian’s cookie jars, those were the work of The Home Edit pre-Netflix, and this show is totally for you!

Each episode features a celebrity client and some normal people, for, you know, balance. In each case, Clea and Joanna send the client/s away, and bring in their team of assistants to do the heavy lifting and the actual work while they get extremely stressed about everything being lined up perfectly, so much so that you may start to worry about their blood pressure. (Fortunately, their star assistant Sumner quietly fixes everything in the background while Clea and Joanna are being all melodramatic about it.) Difference 3: Kondo works with all normal people and helps them to do it for themselves, rather than surprising them with a reveal at the end. Kondo says that while cleaning is reckoning with nature, tidying is reckoning with yourself (not a cult) and that sort of lesson isn’t really happening here.

Difference 4: there is an ASMR quality to Marie Kondo; watching her show is soothing and relaxing, and you definitely do not get this effect with Get Organized. Clea and Joanna joke that they are A LOT, and they definitely are. We see this in the visuals as well: Kondo’s aesthetic tends towards the beige, which might be a little dull but reinforces the calming tone, whereas The Home Edit’s love of rainbows means there is a certain loudness in the aesthetic as well as in the manner of the execution. (Of course, Kondo’s personal aesthetic isn’t forced on her clients; if rainbows spark joy, she’ll help you make rainbows. Not a cult.)

Difference 5: whereas Kondo’s show and method have a spiritual and emotional foundation, what with the greeting of homes, thanking objects that have fulfilled their purpose and can now move on, and sending love through your palms as you fold (not a cult), The Home Edit’s spiritual home is more Container Store than Shinto temple. That might work for some people; even this Kondo-stan found herself wishing there was a Container Store nearby…

But the part that will probably cause the most debate is in the organization of the humble bookshelf. Get Organized celebrates the rainbow bookshelf, reasoning that it looks pretty, you can still find what you want, and it creates an easy system for people putting books back in the right place. While this isn’t as controversial as the backwards ‘spine in, now look at all that papery beige’ method you might see on some Pinterest pages, it’s not for everyone, and this is Part A of my second confession: I really like the rainbow bookshelves.

I was tempted to ‘rainbowfie’ my own shelves, until I looked at my current system and just couldn’t go through with it, because of Part B: my book filing system is based on genre and size. It makes more sense to me than an alphabetized system with conceptual logic but the practical chaos of hardbacks and paperbacks mixed together. (The horror!) I have the same system for music and DVDs, and fun fact: sorting your DVDs by genre kind of sorts them into colour groups anyway, so that’s a bonus point for monsters like me. (I can already hear you logging into Disqus to shame my book filing.) With the books though, rainbows would have messed up the genres and that was a step too far for me.

As a review of Get Organized, this is all admittedly inconclusive. There are aspects of it that I had reservations about, but I’ve watched it all twice, so I can’t pretend not to have enjoyed it. It’s not Marie Kondo, but if you need another show to encourage you to do some tidying up before her second season comes along, it will do for now. Most importantly, KonMari is not a cult. Probably.

← Studios Do the Delay Dance Again, As It Looks More Likely Things Won't Reboot Until 2021 | 5 Shows After Dark: 'The Masked Singer' Season 4 Premiere, 'Agents of Chaos' on HBO →