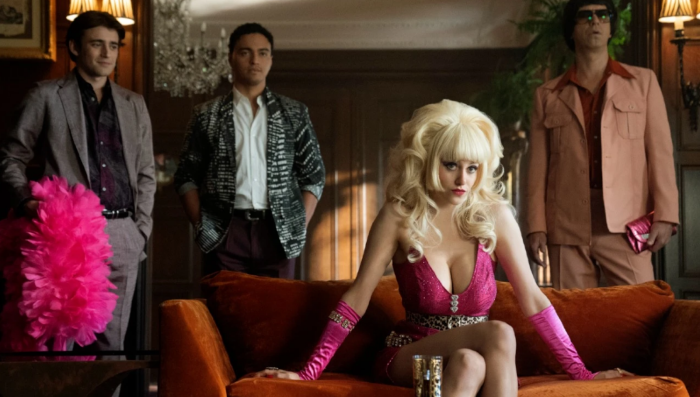 Review: Emmy Rossum Takes on Ambition, Billboards, and the Celebrity Machine in ‘Angelyne’

‘I am not a woman. I am an icon.’ So is the mantra that opens Peacock’s original miniseries Angelyne and introduces its eponymous star. Unless you’re a Los Angeles native or care way too much about the minutiae of modern celebrity, the chances are that the name Angelyne won’t mean much to you. But to a generation, she is an icon of a hyper-specific sliver of fame, the woman who became famous thanks to a series of enigmatic billboards positioned around Hollywood. Hang around the City of Angels long enough and you might be lucky enough to see her iconic pink Corvette whiz past you. Nothing was known about Angelyne’s life or intentions for decades until an article by The Hollywood Reporter revealed her early life as the daughter of Holocaust survivors, a woman who reinvented herself as an impenetrable haze of peroxide and camp. How do you tell the story of someone who wanted to be simultaneously famous and anonymous?

If you’re Emmy Rossum, the actress behind Shameless, then you kind of don’t. The star and executive producer of Angelyne is as eager to explore how the concept of celebrity works as she is the tale of the billboard queen. This is a niche story, one that doesn’t seem to have the basic tenets of a classic Hollywood biopic or rags-to-riches tale. How much can you plumb the seeming depths of shallowness? But therein lies the most interesting parts of Angelyne, which sees those well-worn tools of real-life storytelling as ill-equipped for someone like its star.

Angelyne is a woman who, as portrayed here, had a single-minded obsession with becoming a star yet didn’t seem to possess any traditional kinds of talents to do so. She shoulders her way into leading a mediocre punk band before going solo and then choosing to promote herself, and only herself, through the billboards (aided by an ambitious ad man played by Martin Freeman.) Soon, offers for movies and music and TV gigs pour in but she seems wary to accept them. She doesn’t want to be famous for what she does, she says, but for who she is. This distinction and the exploration of it fuels the most piercing aspects of the series, particularly as it delves into the backstory that Angelyne never wanted anyone to know.

Rossum is committed in her performance as Angelyne. Complete with a heavy head of blonde hair and a massive breastplate that dwarfs her petite frame, Rossum is clearly having a ball being so unrecognizable. She nails the Valley girl drawl and piercing stare of a woman who always is trying to charm you or figure out your deal. Angelyne is no bimbo, despite what many (MANY) people say to her face throughout the show. Rossum slyly moves between these various modes, from Marilyn copycat cover girl to evasive deal-maker. While it’s clear that Rossum and the show have affection for their subject, this is not a whitewashed fairytale (which may be why Angelyne herself stepped away from an executive producer role.) She can be cruel to people, including her fans and underlings (like a hilariously beleaguered Hamish Linklater, who plays her fan club president-slash-goon.) Her trash-talking is plentiful and frequently hilarious. She certainly doesn’t seem to like other women that much, even as she rallies against the misogyny she’s experienced. Angelyne is appropriately unknowable, with Rossum relishing these contradictions, and she retains that steely edge even as it becomes clear that her heyday has long passed.

Much of the show is structured like a documentary on Angelyne (and indeed someone did try to make one for many years to no avail, which the show covers in delightfully meta fashion). Her former bandmates call her an opportunist while demanding payment for their presence. The daughter of her former manager admits to the struggle of being a ‘regular’ woman in the perpetual shadow of the bombshell. Angelyne interjects with her side of the story, which in some points, are punctuated with record scratches. Onscreen text establishing times, dates, and locations include question marks. At one point, Angelyne stops a scene to remove someone from it because ‘This isn’t about you. This is my story.’ This sort of meta truth can become tedious but Angelyne is spry in how it plays with these contradictions and what they represent about Angelyne herself. It helps that the show has no interest in downplaying her weirdness or the sheer aggravation of her vanity.

Angelyne is frequently referenced as a precursor to the likes of the Hiltons, Kardashians, and Real Housewives: the original queen of being famous for being famous. While it’s not entirely true (such figures have always populated Hollywood and society scenes), it is true that she tapped into something uncanny about the entire concept of celebrity. Angelyne’s progeny, so to speak, offer up every aspect of their lives for consumption. Glamorous billionaires must prove their relatability while clad in their own brands. They all have several side-hustles and are forced to evolve to stay on top as a new era of hot young things tries to take over. Angelyne created the new rules but also never followed them. That she was simultaneously iconic and anonymous is a dichotomy we probably won’t see again, and Angelyne understands the appeal of this liminality (the series is far less interesting when it sets up blunt questions on her life and fears and answers them accordingly.)

Angelyne is the epitome of the ‘only in Hollywood’ ethos and the immense work and control required to make the fantasy happen. Anchored by a superb leading performance and a deft understanding of what its subject represents, Angelyne is a must-watch for Angelenos and celebrity novices alike. If only Peacock had some interest in promoting one of the best original shows on its platform right now. They could take a tip or two from the billboard star herself.


← 'Ten Percent,' the British Take on 'Call My Agent' Is So Faithful to The Original That It Offers Nothing New | 5 Shows After Dark: 'Atlanta' Third Season Finale, 'Angelyne' Series Premiere →