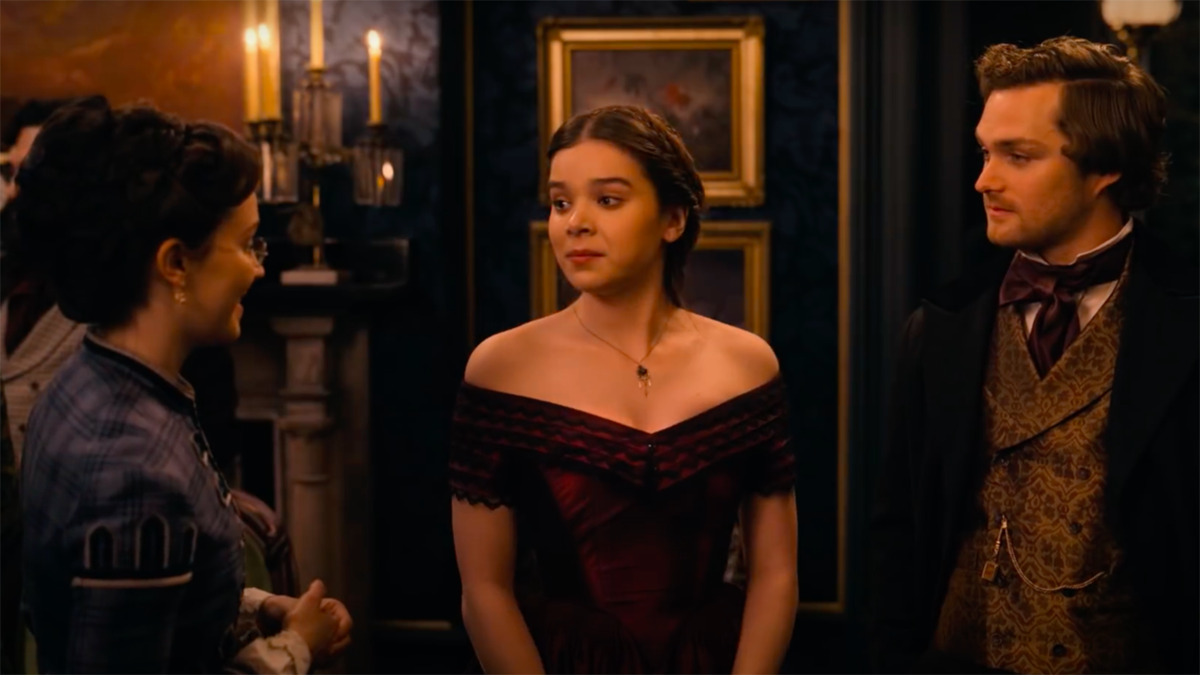 In the fall of 2019, I praised Dickinson, Alena Smith’s rollicking bio-series about 19th-century poetess Emily Dickinson, cheering its anachronisms, lustiness, and unabashed weirdness. Fans of all of that will revel in much of Season 2, in which Emily pours her passion into baking contests, poetry, séances, and forbidden love with equal intensity. Once more, Hailee Steinfeld is a mesmerizing leading lady, who wears her heart, bare and bloody, on her sleeve as a promise and warning Emily will be too too much. Beyond more of the same great stuff, there is plenty to admire in this bold second season, but not all of Smith’s gambits pay off.

Season 1 saw Emily (Steinfeld) disrupting Amherst patriarchy with her desire to be a professional writer (how unladylike!) and not get married off to some rich gentleman (her mother’s greatest wish for her). Instead, Emily turned down a promising proposal and fell in love with her brother’s wife, Sue (Ella Hunt). In stolen moments, they shared Sapphic kisses, the traces of their romance found in Dickinson’s swooning poetry. Season 2 begins with a bit of a warning. While much of Dickinson is history slathered in lots of speculation, modern slang, and a hip-hop soundtrack, this second chapter warns it’ll be even less tied to facts, because Emily’s life in 1859 is documented only in a handful of letters. Yet opening narration playfully suggests, “the truth—perhaps—is hidden in her poems.”

As with Season 1, each episode centers around a Dickinson poem, using its words to explore what might have been a formative experience for the mysterious writer. The major arc of this season, however, is about Emily’s conflicted quest for fame. Her parents still don’t approve of her ambitions, but her chief concern is about whether fame will help or hurt her. These tensions take the form of a strange apparition, a sweet-faced, white gentleman who appears before her and calls himself “Nobody.” Fearing he’s a ghost, she holds a séance to ask for advice about whether she should pursue publishing her poems. But nothing comes easily for Emily. Colliding with this internal conflict is Samuel Bowles (Finn Jones), the dashing editor-in-chief of the newspaper, The Springfield Republican. He is an ardent admirer of her work…and if the rumors are true, maybe of her too?

Dickinson’s sexual orientation veers bi as she pines for Sue and lusts after Samuel, and the series veers with her. When Samuel struts into a room, he does so in sultry slo-motion, allowing the glory of his locks and cocky smile to glow in the candlelight. Meanwhile, Sue gets sexual pressure from Austin (Adrian Enscoe), which leads to a steamy sex scene that spells heartbreak for Emily. Then bringing role-play, fantasy, and BDSM into the mix is Emily’s sister Lavinia (Anna Baryshnikov), who has overcome her awkwardness to become a badass in the bedroom, where she explores her fascination for a legendary Lola! Such scenes explore the characters’ sexuality in ways earnest and silly, yet never kink-shaming. Essentially, if Scarlet Letter cosplay gets you hot and bothered, you do you!

Season 2 once more weaves in Emily’s fantasies, allowing for thirsty moments and quirky cameos, like Nick Kroll as a deeply horny Edgar Allan Poe. Plus, the rest of the Dickinson family gets more of a chance to spread their wings, with threads about sexual frustration, financial strain, the ache for parenthood/purpose, and confronting the complicated matter of getting a dream you no longer long for. All of this is rich territory, which makes Emily’s intense navel-gazing feels a bit torturous and anti-climactic. Instead of episodes ending on cliff-hangers, they end on an exasperated sigh with Emily once more vexed. Even as dazzling as Steinfeld is in the role, Dickinson risks becoming one-note. Then, it tries to weave in an abolitionism plot and things get downright cringey.

In the posh parlors of Amherst, Massachusetts, slavery and the efforts of abolitionist John Brown are topics discussed by wealthy white gentleman over cigars, or Black servants in secret meetings in a remote barn. The former speculate about a possible war and the economy with the air of men who feel it’s all some theoretical game of chess; the latter debate purposefully about escape, revolution, and the worth of pandering to white allies. This subplot follows Henry (Chinaza Uche) and Hattie (Ayo Edebiri), whose day jobs are as servants to the Dickinson family, but whose true passion is writing an underground newspaper to spur a revolution. This thread is rich with aching relevancy and storytelling potential. However, as it exists in a show about a rich white family, even abolitionism and Black oppression are filtered through the lens of what it has to do with white people’s feelings.

This peaks in episode 8, where there are riveting scenes, particularly one questioning the advocacy methods of escaped slave turned popular performer, Henry “Box” Brown (Ade Otukoya). Uche, Edebiri, and Otukoy bring radiant passion to this episode, first in a sharply scripted debate, then in a pulsing dance number plucked from Paris is Burning-style balls. Yet, their thread crashes into a callous comparison, suggesting Henry and Hattie’s struggle to produce a newspaper that could free Black people from oppression is similar to Emily’s desire to put her creative freedom over fame. Soulful scenes in which Henry and his wife Betty (Amanda Warren) recognize what this revolution could cost them are undermined by the final message, which centers a life-or-death struggle for civil rights on Emily’s vanity and Austin’s insecurity.

From there, it’s hard to indulge in the frivolities or even the pathos of Dickinson’s final two episodes. Emily is fretting over her poetry, risking nothing but her ego, while Henry’s safety is given a mournful cutaway as his and Hattie’s plotline is shelved in favor of more white folk frolicking. Perhaps Smith hoped this abolitionism thread would create a sense of wider context to this cozy enclave’s privileged problems. It does that, but in a way that makes its heroes far less sympathetic, more painfully shallow. Worse yet, it treats one of America’s greatest on-going battles for freedom as a bit of spice for a vanilla self-discovery narrative.

Simply put, Dickinson has a lot of larks in its second season but goes off the rails when it treats race politics like an edgy flourish.

Episodes 1-3 of Dickinson Season 2 are now on Apple TV+.

← Review: 'Ghosts' On HBO Max Is The Horror-Britcom You Didn't Know You Needed | What is 'Virgin River' and Why is the Netflix Show So Popular? →