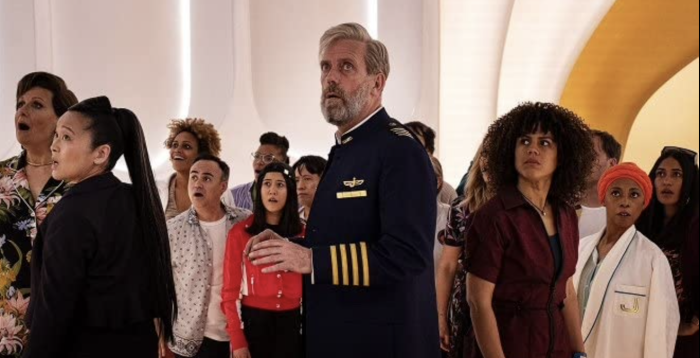 Armando Iannucci's 'Avenue 5' Is Back and Better Than Ever

Armando Iannucci’s most recent HBO comedy, Avenue 5, has finally returned for its second season following an extended Covid hiatus. Season 1 premiered in January 2020, unfortunately airing in the weeks leading up to global shutdowns. Now three episodes into Season 2, Avenue 5 has met and exceeded my already high expectations for satire-expert and VEEP creator, Armando Iannucci. Episode 3, “Is It a Good Dot?”, premiered Monday, October 24 on HBO.

Activities on the now not-so-shiny space cruise liner include: a daily live cooking show that highlights tips and tricks for cooking fancy-ish dishes with only hotel room supplies; meals that may or may not be getting smaller and less tasty; toddler fight club in the soft-play area; and watching a number of marriages fall apart in real time.

Without the tedious responsibility of setting up the premise and introducing us to—-and making us root for—-a handful of horrible people, Season 2 leans into the “situation-comedy” format seeped in a contemporary sense of dread. The first three “situations” of Season 2, which tend to present themselves as life-threatening emergencies rather than traditional “antics,” have included: informing passengers they will not be home for eight years, a possible collision course with the Sun, and accidentally making contact with a Black-Ops Military Space Prison.

While talking about researching Washington DC during his tenure as VEEP showrunner (Seasons 1-4), Armando Iannucci said of imposing government buildings, “Everything looks like it knows what it’s doing.” Apply that sentiment to a TV show about near-future space travel and you’ve got Avenue 5. Season 2 is Iannucci doing what he does best: Exposing the limits and fragile stability of institutions that want to seem all-powerful. He mocked new-Labour via his 2005 BBC show The Thick of It, contemporary US neoliberalism in VEEP, and, at the very least, mocks the false-reverence afforded to billionaires (especially billionaires in space) in Avenue 5.

It feels criminal to continue on about the show while ignoring its out-of-this-world cast. Hugh Laurie plays Captain Ryan Clark, a British actor who is hired to play a “suave but rugged” front-facing captain of Avenue 5. His charisma is complemented by the ship’s senior-most surviving Engineer, Billie McEvoy (Lenora Crichlow), a rocket scientist with less than stellar people skills. Matt Spencer (Zach Wood), Head of Customer Relations, swings between over-bearing activities director and the de facto ship-wide therapist. Iris Kimura (Suzy Nakamura) is the brains behind the “Judd” operation and operates with a near-violent Type-A mentality. She is the direct line between Avenue 5 and the organization now assigned to its rescue—-one of my favorite B-plots of the Avenue 5 universe—-TOTOPOTUS (The Office of the Other President of the United States): TOTOPOTUS, based on what we know so far, is an executive position in the near-future US government. It seems to be a secondary executive position (likely equal to the president) that deals with issues of national security and general resources(?).

Although certain gags from the first season have been “fixed”—-namely, the 26-second communications delay between ground control and the ship is solved via TOTOPOTUS-provided AI—-the stakes for survival in space are no less present.

The best Season 2 bit so far? It seems near-future streaming audiences are just as interested in (too soon) adaptations of current events as high production value streaming dramas. Yes, the day-to-day survival efforts of the passengers and crew is repackaged and fed to obscenely hot actors for next-day dramatization. Iris, of course, picks up on the show’s popularity, buys it, and uses fan engagement as a means to leverage a potential rescue mission.


← Let's Talk about the Ending to FX's 'The Patient.' Will There Be a Season 2? | 'Ray and Raymond' Is an Apple TV+ Movie Starring Ethan Hawke and Ewan McGregor →