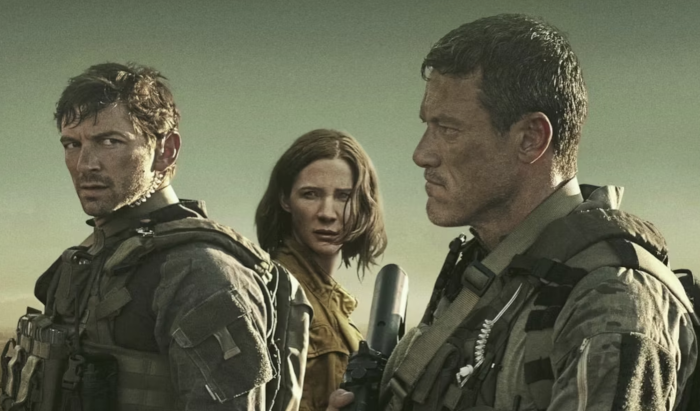 Review: Apple TV's 'Echo 3' Should Have Been a Movie

To understand why Echo 3 is as frustrating as it is, it’s necessary to spoil it through the first three episodes. Adapted from the Israeli series, When Heroes Fly (itself adapted from a novel), Echo 3 comes from screenwriter Mark Boal (Zero Dark Thirty, The Hurt Locker), and deploys a similar feel and tone as his previous efforts. It’s a military action series that eschews Michael Bay-like American ra-ra jingoism for quieter and more intense action sequences that lend the proceedings a certain journalistic quality. But make no mistake: The Americans are still the heroes and the antagonists are still largely faceless Black and brown people, here on the Colombian/Venezuelan border.

That’s where Amber — a scientist researching the use of psychedelics to battle addiction — is abducted by guerillas and her colleagues are killed. It turns out that Amber is also a CIA agent spying on these guerilla armies. Enter her husband, Prince (Michiel Huisman), and her brother, who goes by Bambi (Luke Evans), two military types who organize a rescue mission to save Amber from the guerillas. There are a lot of politics and negotiations involved, but eventually, Prince and Bambi assemble a team and attempt to extract Amber. It’s sharply directed, hold-your-breath intense, and terrifically well done.

But here’s the spoiler: The rescue mission fails.

There are still seven episodes to go.

It’s frustrating because the series doesn’t do anything else. It’s a 10-episode rescue mission (assuming she is rescued in the season finale, and it’s not maddeningly pushed further into a potential second season). There are a few modest twists, a few more political obstructions, and other difficulties, but the characters remain relatively flat and the treadmill never advances. Once it becomes apparent that the rescue mission will take the entire season to pull off, the tension dissolves. There are three main characters wearing thick plot armor, one mission, and ten episodes. Instead of being a heart-pounding, suspenseful action thriller, it mostly spins its wheels. There’s an episode, for instance, where Amber escapes and spends much of the episode on the run only to be recaptured at the end of the episode, back to square one. It’s a very grim, very dramatic version of Wile E Coyote.

Echo 3 didn’t need to be a 10-episode series. If you’re into Mark Boal action thrillers (and I’m ambivalent), the first three episodes would’ve made an excellent movie. As a series, Echo 3 doesn’t stretch three acts into 10 episodes so much as it repeats the three-act structure three times. It takes two steps forward and two steps back. If Luke Evans (who does good work) or Michiel Huisman (who does not) are interesting to you, it may be worth the investment. Otherwise, watch three and skip to the end.