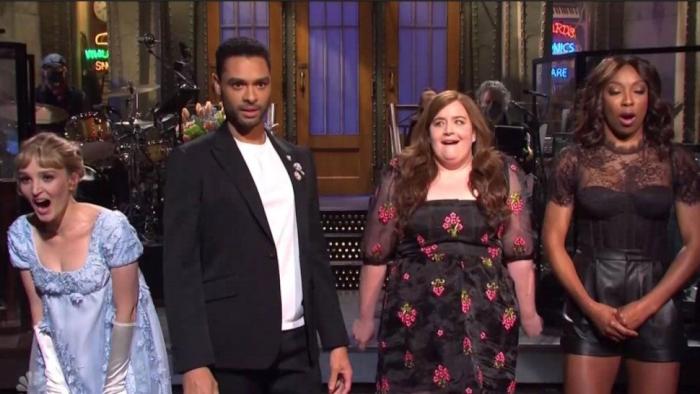 Regé-Jean Page Hosts an Excellent 'SNL,' and Regina King Looks on from Home with Some Serious Side Eye

Cold Open — Chloe Fineman cracks out her Britney Spears impression to host a show where people come to apologize. This week’s episode features Ted Cruz (Aidy Bryant), Andrew Cuomo (Pete Davidson), and Gina Carano. Honestly, Davidson’s Cuomo is the best part of the skit, particularly when he trashes Cruz when Cruz tries to “relate.” Meanwhile, when Cruz tries to relate with Carano, Cecily can’t keep a straight face. (Score: 7 out of 10)

Regé-Jean Page Monologue — Expectedly, the monologue features Regé-Jean Page trying to blow off how handsome he is while Aidy, Ego, and Chloe lose their absolute sh*t over him. I think it’s awesome that Regé-Jean Page gets to host based basically off of one season of one series! I mean, it only took Regina King 25 years, 4 Emmys, and an Oscar before she was asked, but sure! Give it to the handsome man who gets naked on TV! (Score: 6 out of 10)

Actor’s Spotlight — After the host of a talk show played by Ego Nwodim expresses surprise at learning that Kingsley Bin Adir (Page) and Daniel Kaluuya (Chris Redd) are British, Ice Cube (Kenan) says he’s British, too, and that he’s known as “Coldy Squares” back in the UK. The skit only works because of Kenan, but that is true of 20 percent of SNL over the last 15 years. (Score: 7 out of 10)

Loco — I love how much screentime Ego is getting tonight. She’s featured heavily (along with Pete Davidson) in this rap about going crazy after a year in the pandemic. (Score: 7 out of 10)

Driver’s License — They did a version of this skit before, although I don’t remember what song it was. Here, 7 tough guys in a pool hall basically geek out over teenager Olivia Rodrigo’s debut single, “Driver’s License.” It’s a great skit. Where were these great skits when Regina King was around, huh, SNL? You were saving all your good material for the guy from Bridgerton instead of the greatest actress of her generation? Cool, cool, cool.

This one is also the Mat sketch of the week, if only because I know for a fact that “Driver’s License” makes him wistful and nostalgic. Also, holy shit, his daughter probably learned to drive over the pandemic. (Score: 7.5 out of 10)

Mr. Chicken Legs — It’s a competition where three men vie over who has the skinniest chicken legs. It’s a profoundly dumb skit, but Page is very good, Cecily Strong is hilarious, and Pete Davidson’s Jack Skellington is kind of great. (Watch Here) (Score: 6 out of 10)

Job Interview — Page plays a character who interviews with a failing ad company run by Beck Bennett that makes ads for clients who have already rejected them. I don’t even know what to think of this skit — it is all over the place — but I kind of loved it? Page is bringing really good energy tonight. (Score: 7 out of 10)

Weekend Update — “Ted Cruz, whose face is slowly being reclaimed by nature,” may be the best description of Ted Cruz that I have ever heard. Colin Jost should be proud of that. Likewise, Che describing Andrew Cuomo as someone who “looks like all three Goodfellas at once.” Meanwhile, Heidi plays Jessie Raunch, who comes on to talk about food insecurity, dressed exactly like Freddy Krueger. Pete Davidson, meanwhile, comes on as a “relationship expert,” which is really just an excuse to talk about moving out of his mom’s house and make fun of Colin for marrying ScarJo. It really is a great energy night. (Score: 7 out of 10)

Sea Shanty — I can tell a lot went into this skit, about a ship crew singing sea shanties about dying at sea, and as much fun as everyone is having, it still doesn’t do much for me. (Watch Here) (Score: 4 out of 10)

Grace — A Black family and a white family get into a friendly competition over who can say the most elaborate grace before dinner, and while this isn’t a great skit, Beck Bennet break-dancing during grace is greatness. (Watch Here) (Score: 6 out of 10)

Bridgerton Intimacy Coordinators — Mikey Day and Pete Davidson play really crass intimacy coordinators in Bridgerton after the regular one is exposed to COVID. The sketch kind of writes itself, which is to say, there is nothing surprising about how it unfolds. (Watch Here) (Score: 3.5 out of 10)

Grocery Rap — Even the best episodes usually have a Kyle Mooney skit. This one is no exception (*sigh*). It’s about three guys who want to make a rap video about buying groceries, but who refuse to wear a mask in the grocery store. (Watch Here) (Score: 3.5 out of 10)


← Spoiler Review: The Ending of Netflix's 'Behind Her Eyes' is Bananas | 'WandaVision' Reveals Its Mini-Boss as the Show Goes Full MCU →