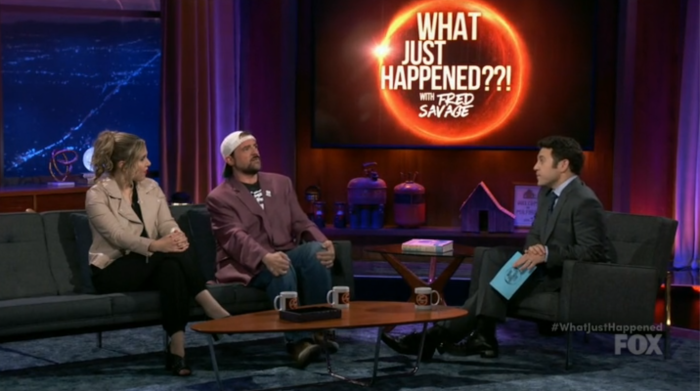 I am a little bit in love with What Just Happened with Fred Savage, the real aftershow for a fake Fox drama, The Flare (which, according to this week’s episode, is the highest rated Fox series in 20 years). It’s not that What Just Happened is good, it’s that Fred Savage behaves like a methed-up hamster, fueled by equal parts faux enthusiasm and sweaty desperation. It’s bizarre performance art that doesn’t quite work as satire, if only because — like Alec Baldwin’s impersonation of Trump — it’s too on-the-nose.

The fact that no one is watching What Just Happened — the premiere ratings were a lousy 800,000 viewers, and it fell to an anemic 640,000 viewers in week two — makes me like it even more, as though it’s designed for a tiny audience, like a UHF cable access show or a Faceboook Live video specifically targetted to a select group of people who are very high and very bored. It’s bad, but clever, although its cleverness seems almost unintentional. It’s funny, but it’s unclear whether it’s funny in a way that Savage intends it to be. I honestly have no idea if I’m laughing at Savage or with him, and that is the show’s almost singular appeal.

This week’s episode, like the premiere, opens with a nonsensical clip of The Flare. We discover that the solar flare somehow not only erased the memory of everyone in town but also inexplicably blacked-out every photo. What? A mom says, “I don’t need photos to know who my family is,” as she eyes a door frame with her children’s heights on it as evidence, as if to say, “I have no memory of my children, but I still love them, because little Annie was 4’1 when she was 12 years old.” However, little Annie walks into the next room and reveals that she’s … one of them (who is “them”? I don’t know! It’s a made-up show!) 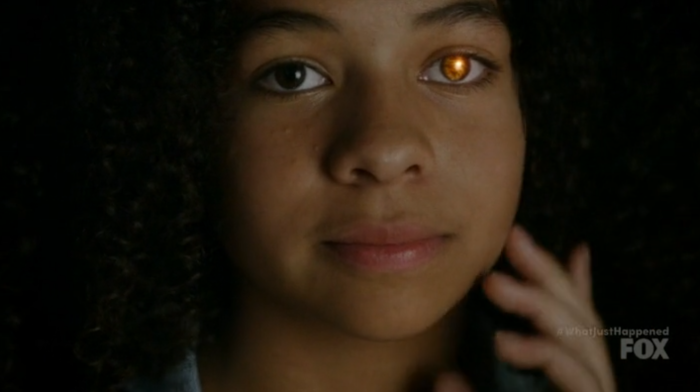 From there, Savage runs out in all his Hardwickian glee, hyping a mindblowing twist. Beyond that, however, The Flare is barely mentioned again. Instead, Savage shows clips of a viral “Flare Challenge,” which involves doing tasks — like juggling — after staring into the sun for ten seconds. It’s dumb. One guy doing the Flare Challenge gets hit by a golf cart, which becomes a recurring joke throughout the episode. He shows up in the studio audience, and as he stands up to introduce himself, he’s hit by another golf cart. Later, at the end of the episode, it’s revealed that the disgruntled golf-cart guy has been sneaking spoilers for The Flare onto cue cards that Savage unwittingly reads. When Savage catches him in the act, disgruntled golf-cart guy pulls out a gun, but before he can shoot Savage, he’s run over by a golf cart again.

It took a team of writers to come up with that recurring gag. 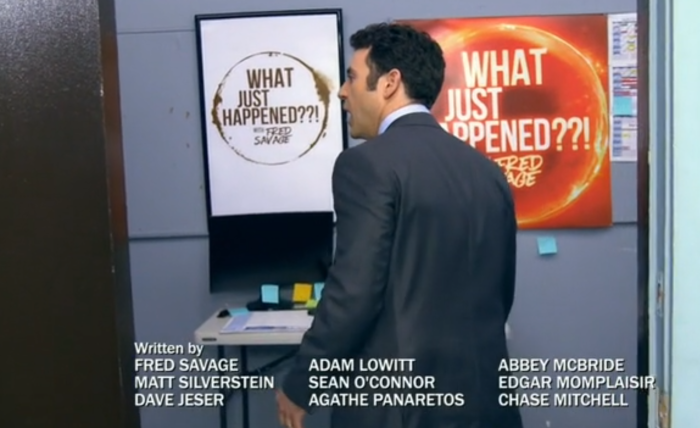 Vince Gilligan of Breaking Bad fame also appears on the show as a guest, because he directed the latest episode of The Flare. He has a three-minute segment in which he says literally ten words, “Colin Farrell was photographed on the set of The Flare.” Those are the only words he utters. The entire rest of the segment is Savage pleading for spoilers about Farrell’s character, then retracting those pleas because he doesn’t want to be spoiled. Gilligan just sits and watches Savage carry out this argument with himself. It is sublime.

Calling back to the fake series, there’s then a segment in which Savage asks his staffers to show him embarrassing photos that they would like to burn, which feels a lot like a Conan segment, if Conan had drunk a six-pack of Red Bull, fallen down a flight of stairs, and suffered a mild concussion.

The final segment sees Kevin Smith show up as a guest. Smith doesn’t once mention The Flare. Kevin spends the entire segment talking about his heart attack, and how when he thought he was going to die, the only regret he had was that he hadn’t yet made Jay and Silent Bob Reboot, out on October 15th! There are 640,000 people (plus the 551 people who watched this clip on YouTube) who now know the release date for Jay and Silent Bob Reboot!

That’s it. That was the show! I watched it a second time so that I could catch everything I missed the first time. I missed nothing — there are no layers whatsoever, and that’s what makes What Just Happened so profoundly fantastic, but also terrible. And yet, I feel compelled to recap the series, because if the snake is going to fully eat its tail, I feel it’s imperative that a television recap of a real aftershow about a fake television drama must be written. It brings it all deliciously full circle.

← Trailer Round Up: 'Judy,' 'Maleficent: Mistress of Evil' and 'Aziz Ansari: Right Now' | 'Adults of Reddit, What is Something You Should Have Mastered By Now, But Haven't?' →