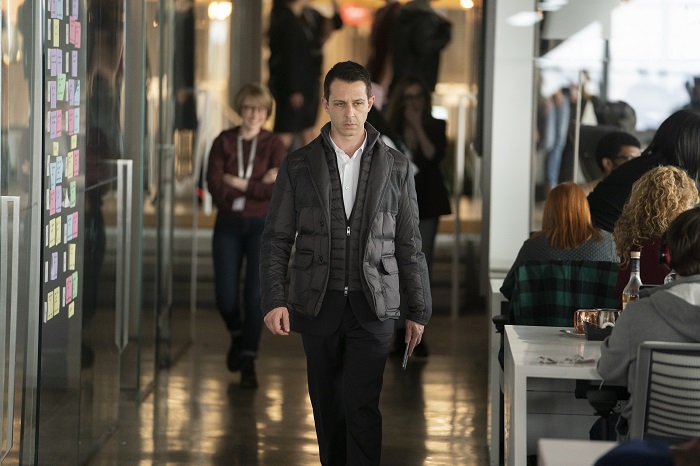 Recap: Everyone in ‘Succession’ is an Asshole in ‘The Vaulter,’ With Burned Bridges, Destroyed Companies, and Pivots to Video Galore

Watching “The Vaulter,” the second episode of Succession’s second season, felt like the literal embodiment of going from zero to 100 real quick. At first, everyone is minding their business, doing whatever, scheming behind people’s backs, and then all of a sudden shit got so real and I felt so nauseous and truly at a certain point in the episode I wanted to hide under my couch while also simultaneously throwing up. That would have been a horrible mess to clean, but my god, does the Roy family know how to bring a grenade to a knitting circle. I am just flabbergasted.

“The Vaulter” requires your memory of a first-season Succession subplot, including Larry Yee, CEO of the media website Vaulter, which is very much akin to Gawker or Vice and was acquired by Kendall for Waystar Royco. Vaulter is like the opposite of ATN, run mostly by 20-somethings in beanies who drink kombucha, and who want, you know, rights that employees deserve. Acquiring Vaulter last season was supposed to be a way for Waystar Royco to diversify. But in this episode we see it destroyed at Logan’s behest not necessarily because the company is doing badly—sure, the Facebook algorithm took a chunk out of their hits, which is a recognizable phrase to anyone who has ever been involved in new media—but just because he wants to use it as leverage against Kendall and a further wedge between Kendall and the rest of his kids. It’s some dark shit, and I’ll talk about it later in the recap too, but I just want to note here that you really get a sense of who Logan is in when Kendall reports to him that Vaulter has been gutted. A monster would be happy at this news, that nearly 500 people are out of work and that the prospect of a unionized newsroom was crushed. But Logan seems to barely exhibit any reaction at all, and honestly, how utterly nonplussed he is and how seemingly unable he is to feel joy at something he himself demanded is far more depressing and unsettling.

Everyone is striving for something “better” this week, even if that something is utterly undeserved. Consider Tom, gifted an executive position at ATN by Shiv and hopeful, I think, that he’ll one day run Waystar Royco, although, why the hell would that be the case? I can’t think of a single time that Logan and Tom have spent one-on-one time together. But Tom thinks he’ll get the job, and he lectures Greg about the hilariousness of trying to have principles in this business, but then he goes and tells ATN higher-up Cyd Peach that he doesn’t respect anything ATN does. Why! Would! You! Do! That! Because Tom is sure that this job is a stepping stone for him, anyway, so why not tell Cyd that her network is shit and that only fat Midwesterners watch it and that everything they do is just a transparent ploy for Logan’s approval? The casualness with which he dropped all that, and the brief flicker of surprise when he realized that Cyd, for whatever reason, actually believes what she’s doing is news, was excellent. His parting “Thank you very much, and uh, fuck you, and I’ll catch up with you later,” was perfect Tom, flippant and entitled and sure of himself even as he sticks his foot entirely in his own mouth. Oh, and is Tom wrong? No, but does that sort of right/wrong binary actually exist in Succession? Not really.

If we’re talking about Tom, we should also talk about Shiv, who finally tells her husband that Logan has approached her to be his successor, and in typical Shiv fashion when talking to Tom, she can’t quite say what she really wants, even though she assures Tom that he’s the only person she can talk to about this. If that is the case, why not be honest with him, fully? But we see in their interactions here a similar push-pull to that wedding-night conversation, when Shiv came clean to Tom about sleeping with Nate, not necessarily because she valued Tom’s opinion but because she needed someone to agree with her. And so I’m curious about Tom’s advice to Shiv on how to deal with being caught between Logan, who gives her a 3-year timeline for training under him, and Gil, the presidential hopeful and Bernie Sanders stand-in who tells Shiv he’s considering her for his chief of staff. 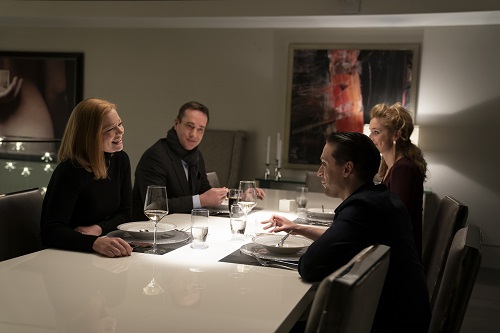 Tom suggests that Shiv offer to take a more background role to Gil’s campaign while she trains with Logan at the same time, but Shiv totally bungles the execution of that idea, not only demeaningly insulting a regular person to Gil’s face but then going for the jugular in accusing him of hypocrisy and selfishness. “You’ve still got my dad’s cock in your mouth,” Shiv fires off, and of course she loses her job after that and of course she won’t let Gil get the final word. Her “I just fucking quit” in response to Gil’s “I just fired you” is the exact kind of childishness you would expect from Roman, but again, remember what Shiv says to Nate at her wedding: “I’m Shiv fucking Roy.” How long until Logan’s training starts transforming Shiv from a person pretending to have principles to someone who, like Tom, thinks the entire concept is a joke?

We’re used to Roman being the joker, of course, and so it’s actually surprising when Roman tries even a minuscule amount to act in a different role this episode. The raging insecurity we learned lurks underneath his façade poked through this week, not only when he second-guessed his decision to support closing Vaulter (I loved Tabitha’s “You did a thing, mazel tov,” in response to his choice) but also when he invited Shiv and Tom over for dinner and then approached Shiv about whether he should be worried about Tom, of all people. Silly, superficial Roman! How do you not see that your primary enemy is your obviously capable, fantastic-in-high-waisted-pants sister, not her blocky-suited husband? I had closed captions on during that dinner sequence and at one point the description of the scene was “all chit-chat awkwardly,” and please know that I really expected at some point for Roman to pivot to “race relations and kale,” as he had mockingly said earlier. But, serious question: Was Tom’s awful advice to Shiv payback for the three of them mocking his body? And when will Roman realize what Shiv is doing? Will he ever?

At least Kendall’s motivations are clear to everyone: It doesn’t get more pathetic and hapless than “Because my dad told me to,” which is how he explains to Larry Yee that all 476 employees of Vaulter are laid off, that Waystar Royco is keeping their food and weed content and running the website now with an editor and five writers, that they’re going to rely on “user-generated” content to keep it moving, that the writers’ dreams of unionizing and a livable wage and bargaining rights are all for naught. (I seriously almost broke out in hives during this time; it took me back to the years I spent at a community newspaper where increasing rounds of layoffs were traumatizing experiences for all of us.) Kendall played Larry Yee the entire time, and he couldn’t convince Logan to keep the website running, and although he’s now earned his place in Logan’s office for doing his bidding, in what other ways will Logan chip away at his son? That party Kendall threw in the apartment where he’s letting Greg live was just an excuse to use (way to turn a kind gesture immediately into shit, by the way), and Greg is now his regular drugs guy, and I’m curious as to whether information about Kendall’s behavior will trickle back to Tom and Shiv through Greg, or if he keeps that information to himself. At this point, who would a better ally be for Greg, Kendall or Tom? Think of when Shiv asked Tom, “What if a good person ran Waystar?” What if, years down the line, that person is Greg?

+ We see in two different scenes that Kendall has no idea how to hug, whether it’s his daughter Sophie on her birthday or when Greg thanks him for letting him stay in the apartment. Kendall Roy, “no longer relevant,” according to Stewy Hosseini, a “broken robot,” according to Roman, and potentially utterly dead inside.

+ Of course Tom wants a portrait of him and Shiv in their ridiculously opulent new home, and of course he would worry that the painting would be “too Saddam?” or “too Assad-y?” You know, people outside of brown dictators do this! I am pretty sure our current president, for example, has tons of portraits of himself. But, this is a good question, actually: Has Succession ever mentioned Trump?

+ Shiv’s trouser game continues to be breathtaking this episode. That scene where she’s perched on the counter? My god.

+ I felt deeply for Greg as he stammered out to Tom, “Like, don’t lie, if you’re on the news,” but it’s clear that no one involved in the Roys really cares about any of this. Note that Roman calls the Vaulter employees “fake journalists,” but he also says to Logan that they don’t represent their company’s “core values,” which are far more along the lines of ATN.

+ Anyone notice Gil put his hand on Shiv’s lower back? I did not care for that.

+ Cyd Peach is a garbage, delusional person, but I cannot deny that her read of Tom was quite amusing: “We serve a demographic of highly, highly intelligent viewers who are really tired of being patronized elsewhere by latte-sipping douchebags with $100 haircuts.” I wonder what her reaction will be when Tom, taking Greg’s idea, dictates that ATN move to digital archiving—and fires people as a result. (“I’m slavering, Pig Man,” was pretty gross.)

+ What was Kendall’s most shameful moment this episode? The fact that he literally said the words “I’m looking for pussy like a fucking techno Gatsby,” or that one of the Vaulter employees spit in his face and he barely bats an eyelash, or that he’s still getting driven around on his motorcycle, or that he stole those batteries from the convenience store just to throw them away? My man is seriously becoming Patrick Bateman.

+ Tom was weight-obsessed this episode, right?

+ Of course Roman would suggest “pivot to video” as a real idea. Just like a typically out-of-touch executive.

+ Not much Marcia this week—and I was surprised, honestly, to see that she doesn’t know about Logan’s grooming of Shiv—but I adored her “He rents a room, he rents a girl” analysis of stepson Connor Roy’s approach to life, now that he’s living in New York City. Connor’s “I’m still applying for the job of President of the United States” legit made me hold back a shriek.

+ Tabitha for MVP this week, not only for her “Sure, maybe,” in response to Roman’s “Maybe I’m smart” but also for how cruelly she toyed with Tom during her delivery of “You should try swallowing something … like honey.” (For people who don’t remember, Tom hooked up with Tabitha during his bachelor party … and some stuff happened that made Tom uncomfortable … that you can probably intuit from her word choice.) I hope Roman takes his mother’s advice and marries Tabitha, that would be perfect.

+ I will be trying to mimic Tom’s delivery of “Congratulations! What the fuck?” for a long time.

← Let's Talk About The Trump Economy | From 'Who Framed Roger Rabbit?' to 'The Thief and the Cobbler': The Genius of Animator Richard Williams →