Jodie Whittaker’s second season as the Doctor started with a Bondian bang, a lot of callbacks and some manic twists in ‘Spyfall’, a two-parter that re-introduced some familiar faces and names. Suffice to say, there are spoilers coming immediately, sweetie, so turn away if you like your shocks to come out of nowhere like a laser blast from a shoe worn by a dancing grandpa.

‘Spyfall’ was A LOT. Not Dracula levels of A LOT, but still, it was a double episode that killed off its biggest guest star in a couple of minutes, gave its second-biggest guest star little to do, resurrected one Gallifreyan out of nowhere and then killed off thousands more. Oh, and Ada Lovelace was there. And Graham wore some killer shoes. And wait, what were those light thingies again?

Let’s start over. The first part was a fairly straightforward Bond-style affair, but with mysterious aliens and a morally ambiguous (initially) tech billionaire, Daniel Barton (Sir Lenny Henry), quietly running the world thanks to his genius invention: the world’s best search engine. Let’s call it Not-Google, or Noogle for short. Meanwhile, international spies are being targeted by strange space cowboys made of light. And so, Team TARDIS are called in to investigate by Stephen Fry, who sticks around long enough to harrumph about the Doctor being a woman, before being unceremoniously shot, leaving the team in need of a spy sidekick who knows about aliens. With Torchwood and UNIT no longer around to keep an eye on This Sort of Thing (budget cuts, and high staff turnover etc), the Doctor remembers her good pal O, the squirrelly Mulder of MI6, currently unemployed and hanging out in a chair in his garden in Australia. Somewhere, Martha, Mickey and Captain Jack are mortally offended at this turn of events.

The Team splits up; Yaz and Ryan go to spy on Barton, despite Ryan clearly being the worst person for the job, and Graham is left with little to do except narrate events for anyone not paying attention to the screen because they are trying to Noogle the actor playing O (Sacha Dhawan) to see where they know him from. Thanks Graham, much obliged.

Ryan manages not to completely blow their cover, and Barton, who is not entirely human any more (thanks, gadget — say, could you sync with dating apps? That would be handy) invites them to his birthday party for a follow-up interview cough TRAP cough. Sadly, Yaz takes a detour on the way — blasted by a space cowboy into somewhere that’s either the Matrix or a parallel universe, or, as I seriously considered at one point, she was shrunk to the size of a flea and stuck in some robot’s chest hair. It’s alright! She’s fine! Some other light sent her to O’s house. Which — huh, that’s weird? No, absolutely not a clue, she’s just done a swapsy with a space cowboy that O and the Doctor managed to capture (as narrated by Graham) who taunted them for a bit before disappearing.

A quick TARDIS trip and a costume change later, Team TARDIS crash Lenny Henry’s birthday party, and then chase him through a vineyard onto a plane. And that’s when SURPRISE, STUPIDS, O is really ‘disappointed Ohhhhhh’ the Master!

And mwahahaha the Doctor’s now stuck in Robot Chest Hair Land, and the plane’s going to blow up, so toodles, dummies!

That was part 1. And it felt like Doctor Who madlibs. So many of the moments were re-hashes of recent plots, or just undid arcs from just a couple of seasons ago, in pursuit of a Big Reveal that felt unearned and rushed. Murderous GPS? Yeah, the Sontarans did that. Mysterious ghostly light shapes appearing out of nowhere? Saw that with the Cybermen not so long ago. The stakes were both too high (universe ending potential!) and too small (no way Chibnall’s going to kill off Ryan, Yaz and Graham in one go, come on). So it was with some trepidation that I went into part 2.

And if anything, part 2 was more bonkers than part 1, but, fellow Whovians, part 2 was much more my brand of bonkers. Released from the Bondian tropes of part 1, it was packed full of timey-wimey weirdness, gave Dhawan more to do than just gloat, and even had the time for the lethal dancing skills of Graham in laser shoes. He’d been gagging to play with those gadgets, and finally got the chance. All hail, the zappy jig.

The last person you’d expect to bump into in Parallel Matrix Robot Chest Hair Land is Ada Lovelace (technically Ada Gordon at this point in time, played by Sylvie Griggs), sporting her best workday bonnet and a reassuring ‘Hey, this happens all the time, don’t panic, the paralysis wears off pretty fast’ vibe. The two of them escape back to Ada’s in the 19th century for a chat with Charles Babbage, quickly followed by the Master and his favourite tissue compression toy (classic!). You’re going to need a bigger gadget, Master, Ada’s packing grenades. Hitching a ride with another space cowboy, they end up in Paris in 1943, in case this wasn’t random enough, where they make a new friend, legendary spy Noor Khan (Aurora Marion). Now this is a TARDIS Dream Team, right? When the Master tracks them down again, this time he’s gone Full Nazi Officer. Hey, remember when Missy had that redemption arc and sort of became nice? Chibnall doesn’t. He does remember the double heartbeat code from the John ‘hear come the drums’ Simm era though, which was a lovely touch.

The Dream Team out the Master as an interloper spy and he’s arrested, leaving the Doctor plenty of time to get back to the future and save the day. Which is lucky, because her fam weren’t having much luck — unless you count landing the cockpit-less plane via an app luck, which you shouldn’t because that was timey-wimey stuff, OK?

Part 2 forced the fam to stand on their own and even though none of them read the instructions to the gadgets they got in part 1, hey, how hard can it be? Bond figures them out all the time, and we all know that a) he’s not the sharpest, and b) he NEVER reads the manual. Along the way they realise they know sod all about the Doctor and that might be a little bit, well, lethal in the long run. Barton’s gone full Evil Tech Bro on tracking them down, so any lingering hope that he was secretly a double agent goes out the window. No, turns out he’s just a megalomaniac with mummy issues. Aren’t they all? Sigh.

So what are the Space Cowboys up to? Why are they stalking tech geniuses across time? Why are they propping up Noogle? Something something use humanity as the ultimate data storage system something something. Always read the terms and conditions, folks, because HASHTAG SATIRE Big Data will destroy the world if we don’t. Who are they? The Kasarvon. Who dat? Uh, ask again later. No-one really knows. The Master doesn’t even really know. He’s just doing some Chaos Consulting, like an intergalactic Moriarty with seriously excellent teeth, and he’s finally escaped from the Nazi situation after an “infuriating” 77 years, just in time to be there at the crucial moment. But it doesn’t matter. The plan fails. The Doctor saves the day with a bit of sneaky recoding in the past (probably reversed the polarity, right?), and uses the same trick she used with the Nazis to out the Master as a disloyal ne’er do well to the Space Cowboys, and boom, the threat is gone. For now, anyway.

There’s just that little nagging matter of Gallifrey for her to take a wee look at. Gallifrey has been stuck in its own bubble universe since the Cup-a-Soup incident from the anniversary special — apparently safe but off limits. But the Master wasn’t lying — it’s seen better days. He’s in a good position to know, as he claims via hologram that he was the one who nuked it into ruins, after finding out the Great Lie at the centre of all they know and hold dear. And lo and behold, a line dropped last season promises to be a big mystery arc for this season: What’s the deal with the Timeless Child? Answers on a postcard…

I really didn’t care for the memory wipes of Ada and Noor. Felt too much like the Terrible Awful that happened to Donna. The Doctor hated doing it then.

The fam were right to worry about having been replaced with Ada and Noor. What an amazing team they made.

Sacha Dhawan’s greatest moment was his hologram message — a moment where he got to do more that mwahaha, though he did that admirably as well.

The Doctor finally gave the fam some of her backstory, and it feels kind of wild that this is the first time it’s come up.

I loved that the Doctor was so excited to save the day that she almost forgot to go back and stop the plane crashing.

Bow ties are cool. Even Yaz’s necklace is a bow tie. 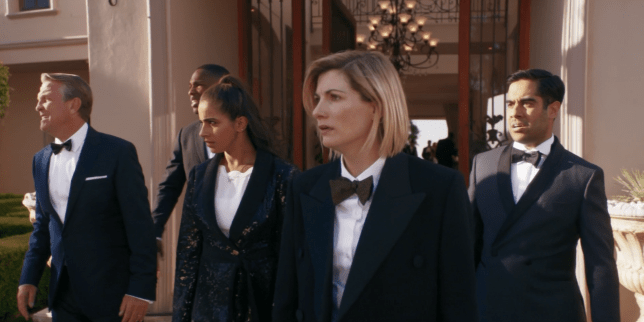 Next time: Team TARDIS need a holiday after all that excitement. What could go wrong?

← Recap: 'Manifest' Is Back, and It Is Still Trash | 5 Shows After Dark: 'FBI: Most Wanted' Premiere on CBS, 'Schitt's Creek' Sixth Season Premiere →