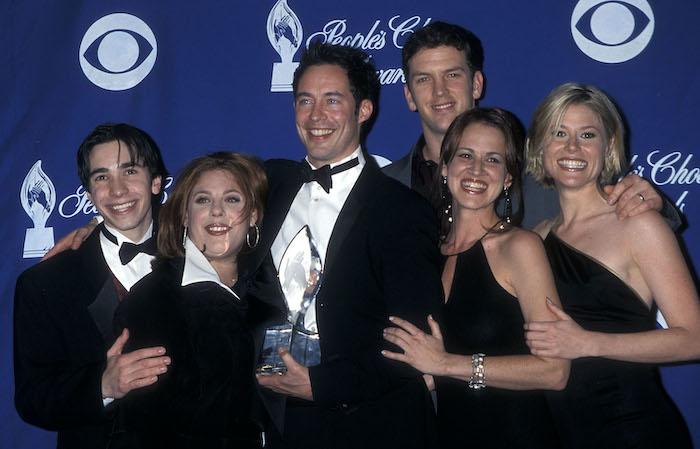 Put ‘Ed’ (That Tom Cavanagh and Julie Bowen Show) on Peacock You Cowards!

I’m going to cut to the chase very quickly here. In the fall of 2000, I, 16-year-old Kate Hudson was obsessed with two shows. One, which you will have heard of and one which you probably know of, too, but recall vaguely because it’s disappeared since then. The first was Gilmore Girls, the second was Ed. (Side note: I always thought Lorelai from Gilmore Girls and Ed from Ed should have dated that’s neither here nor there, though.)

Gilmore Girls is not hard to track down. Hell, Netflix did a revival a few years ago (which was not good) that allowed us to finally know what the fabled last words of the show were from creator Amy Sherman-Palladino before she left GG in its last seasons, and we got another ending, which in retrospect, was much more satisfying as I was never a Luke and Lorelai person. Max Medina was her best boyfriend, and Rory had no good boyfriends.

Don’t remember this show? Heres a refresher, my friend:

Here’s what I remember about Ed—the show was quirky as hell and super weird in all the right ways. It’s lead, the eponymous Ed, was played by Tom Cavanaugh who was very dreamy and also, quite funny. The supporting cast of characters were fun, too—even if John Slattery did play an asshole. OK, that may be harsh, he may not have played an asshole but he did play Carol Vessey’s love interest for a season or two, and the show, if you recall, is about Ed getting divorced and moving back to his hometown to open up a law practice in a bowling alley, and pursue his high school crush, Carol (played by pre-Modern Family but post-Happy Gilmore Julie Bowen.)

Does the slightly cringe-worthy premise of a dude pursuing a chick who doesn’t realize he’s carried a torch for her all these years hold up in 2020? I have no idea because, again, it’s not been released on DVD or streaming since it went off the air in 2004.

Do I remember any of the funny $10 bets Ed made with his best friend Mike? No—but I do remember a few had me in stitches back in the day.

In fact, the only bad thing I remember about this show is how obnoxious I found Justin Long’s character and how the show started to lean heavily into his storylines once it became clear that his career was taking off. Whether that’s the truth or not, I have no idea, because, again, I haven’t seen this show in the intervening 16-years since it went off the air.

I do have hope, though. NBC, which was Ed’s home for four years, is launching it’s streaming service in the spring. They’ve already announced that Law and Order (original flavor) will be available, after a long drought off-streaming, so I can only hope that Ed has some moles in the Peacock executive suite and that they realize that there is an audience for this show on streaming. I mean, I can guarantee you at least one person (me) will watch it in its entirety, and then probably re-watch the first season (which I remember as my favorite) multiple times after that. That’s enough, right, to bring it back to us?

Look, it’s not like I haven’t looked into this issue before. The show had a lot of contemporary music that they aired before securing the rights to air the songs on other media, at a later date, became a thing. I imagine getting the theme song alone would be pretty expensive, especially because at one point, they switched it out while on the air, because paying the Foo Fighters, while a worthy cause, probably doesn’t come cheap. However, it’s 2020. Where there’s a will, there’s a way—and friends? It’s time.

So the Peacock I say: bring back Ed you cowards! To the rest of you I say: hey, remember Ed? It was pretty great I hope it comes back on Peacock!

Play us out, Foo Fighters!

← Bernie Is Just a Lot More Popular than Some Of Us Realize | Box Office Report: 'Sonic the Hedgehog' Holds Onto Top Spot Against 'The Call of the Wild' →