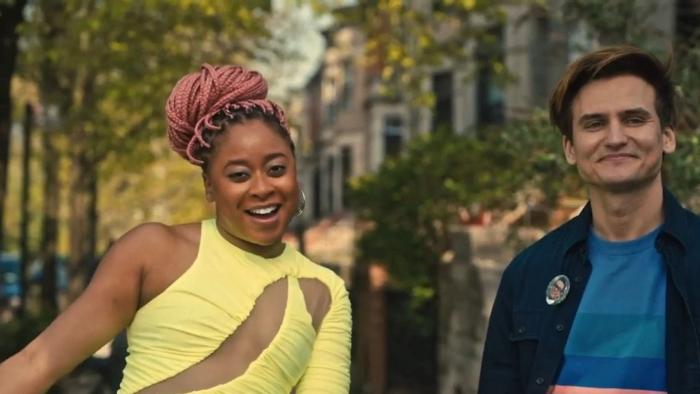 The first two episodes of Phoebe Robinson’s Freeform show, Everything’s Trash, are streaming on Hulu.
As similar in vibe as it is to Kat Dennings’s Dollface, I already like this show better. Maybe it’s my East Coast bias showing, or maybe it’s that Phoebe’s show is more grounded in reality — there are no hallucinatory cat-faced ladies causing trouble.

Robinson plays a fictionalized version of herself with stories ripped from her memoir Everything’s Trash, But It’s Okay. She’s a Brooklyn podcaster who is a little too outspoken and comfortable with her sexuality for her straight-laced older brother, Jayden (Jordan Carlos), and his wife, Jessie (Nneka Okafor). Phoebe is broke but stylish and blunt with her opinions on all things. She gleefully picks up hot men in bars on “fishing expeditions,” dragging the duds with her on late-night pharmacy runs to buy Plan B pills when things go wrong (or too right?)

The first episode is about Phoebe’s relationship with her blerdy older brother and how her podcast-generated celebrity both helps and hinders his budding political career. It serves as a good introduction to all of the main players with a lot of showing instead of exposition dumping. The episode opens on her dragging a dumb but hot date to the pharmacy in the middle of the night to get Plan B pills. You know exactly what you’re getting into with this show from the jump.

The second episode deals with how difficult it is to keep up with The Joneses when you’re poor AF and aspire for more. The wardrobe crew for this show nails the whole thing from Phoebe’s supes casual boxers and tee at-home look to the super fabulous gown she buys in a bid to win a spot on the digital cover of a trendy lifestyle magazine. Her competition includes the very on-the-nose, white, true-crime podcast ladies and the cringe-y Brooklyn Dads podcasters.

Robinson is probably best known from her work with Jessica Williams on Two Dope Queens, the podcast that ran from 2015-2018 and ended in an HBO series. Or perhaps you know her from one of the other podcasts she has developed. Maybe you recognize her from the 2018 Netflix movie Ibiza, in which she plays the hysterical sidekick. Robinson is the creator, executive producer, head writer, and star of Everything’s Trash.. However you were introduced to Phoebe, if you enjoy her sex-positive, Black-excellence, girl-power messages and performances, you’re probably going to enjoy this show.

New episodes of Everything’s Trash air Wednesdays on Freeform and streams the next day on Hulu.