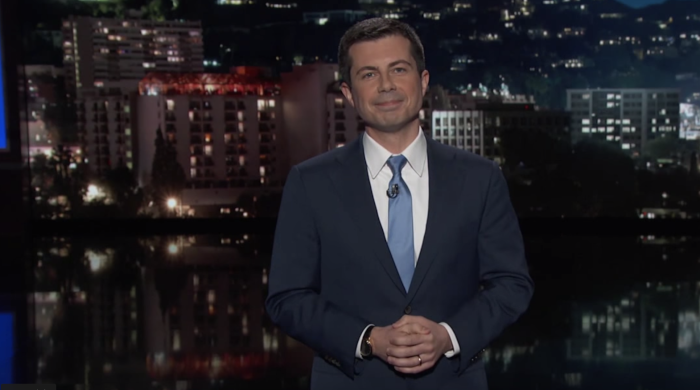 Now that Pete Buttigieg no longer poses a threat as a Presidential candidate, I suppose I can let up on the guy now and stop calling him a pud. He’s a very smart man, and he would make a very good, oh, I don’t know, Secretary of … you know what? I have no idea. Buttigieg never really ran on a signature issue. He ran on being a knock-off Obama, and I don’t if there’s a cabinet position for that. Is there a catch-all position for popular but ineffective candidates? Oh, yeah: Vice President. Given the real possibility that we may need the VP, let’s just not.

He filled in for Jimmy Kimmel last night and delivered a monologue without a live audience (there were a smattering of folks in attendance, including Tony Hale). The material with which Buttigieg was working was actually pretty good — self-deprecating, topical, etc. — although the delivery could have used some work, and the political jokes — like his campaign — had very little bite. The dig at Trump’s inauguration crowd was OK. “But when you don’t have a real audience — you have to fake one just like Trump’s inauguration.”

Buttigieg, who is unemployed now, also did a terrible segment where he tried to land a job with a pretzel shop that also gave me a little anxiety, given the state of things. This thing is gonna hit food-service workers the hardest, isn’t it? If you watch nothing else, however, jump to the 11:00 mark for a fantastic edition of “This Week in Unnecessary Censorship: Democratic Primary Edition,” where we are briefly given the impression that Elizabeth Warren says to a crowd, “We should dream big, f**k hard, and win!” Yes, Senator Warren. Yes, we should!