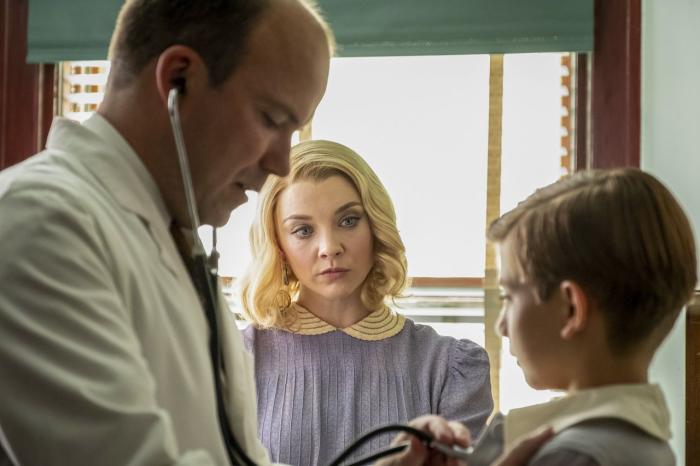 If you squint hard enough, you’ll notice a few thin connective threads stretching between Showtime’s Penny Dreadful: City of Angels and its predecessor, the sexy Gothic monster mash-up Penny Dreadful. A brutal murder mystery kicks both shows off in their premieres. Rory Kinnear stars, though he’s traded his role as Frankenstein’s creature for a very different sort of monster in the sequel. There’s a battle against Evil with the fate of humanity at stake — though instead of the Devil trying to possess a really ridiculously gorgeous woman (Eva Green’s Vanessa Ives), this time the angel of chaos IS a really ridiculously gorgeous woman (Natalie Dormer as Magda, or whatever character Magda is pretending to be at any given moment). Seriously, if you have to find someone to fill Eva Green’s shoes, Natalie Dormer is just *chef’s kiss*. Still, if you were tuning in expecting the kind of lush, dark escapism Penny Dreadful offered in abundance, you likely walked away from City of Angels a bit confused. There is no escape in sight, here. Instead, City of Angels is dealing in racism, religious fanatics, and Nazis in America — and it makes the original Penny Dreadful look like a beacon of restraint and subtlety.

Not that I’m complaining. The premiere episode showed a lot of potential, even if its themes are sometimes painfully on the nose. Set in 1938, our beleaguered hero this time around is Tiago Vega (Daniel Zovatto), the first Mexican-American detective to join the Los Angeles Police Department. His partner, Lewis Michener (Nathan Lane), is a veteran detective who claims he only agreed to work with the rookie because nobody else wanted to, though he also sticks up for Tiago when confronted with the racist bullies in the department. Their first case together involves a murdered family found dumped in the LA River, but the reason they’re assigned this case is immediately obvious. The bodies are carved and painted to look like Day of the Dead make-up, and painted on the wall of the culvert is a message written in Spanish, which Tiago translates: “You take our heart, we’ll take yours.” Oh, by the way — the bodies had their hearts carved out.

The investigation is put on hold, however, as another situation pulls most of the LAPD’s attention. The neighborhood of Belvedere Heights has been selected for demolition by the city council, which has plans to run a new motorway through that area. It will surprise precisely no one that Belvedere Heights is a Mexican-American working class neighborhood, where Tiago was raised and where his mother and siblings still live. In fact, his brother Raul is the one heading up the protests to protect the neighborhood from demolition, which pits brother against brother as the LAPD is tasked with quelling the protests. The city is on the cusp of a race war, and Dormer’s Magda is the match that sets the situation ablaze.

Here’s where the requisite supernatural angle comes in: There’s an apocalyptic prophecy that claims there’ll come a time when nation battles nation, race devours race, and brother will kill brother — “until not a soul is left.” Sound familiar? That time is literally this episode! Magda is inciting the events, whispering in the ears of weak humans to nudge them toward their baser instincts, but opposing her — in theory — is her sister Santa Muerte, the holy angel of Death (Lorenza Izzo). Santa Muerte ferries souls to the afterlife, and as such doesn’t have much regard for the living, so the question is whether she’ll stand up as a savior or sit on the sidelines of this fight. Tiago’s mother, Maria (Adriana Barraza), is a witch who believes strongly in Santa Muerte, and even awakens the angel with her prayers — though her request for divine intervention is immediately shot down. However, Tiago himself was marked by the angel when he was a child and may be Santa Muerte’s chosen agent in this battle.

In true Penny Dreadful “too much is never enough” fashion, I haven’t even mentioned the Nazis yet. Enter Rory Kinnear! He plays a kind, gentle German-American doctor named Peter Kraft, whose wife (Piper Perabo) is an alcoholic and whose housekeeper just so happens to be Tiago’s mother, Maria. He’s also got Magda showing up at his office, playing an abused German ex-pat and hitting on him, and he spends his lunch hours marching under a Nazi flag in a local park. That’s the public face of the movement, but the Third Reich also has agents working secretly to gain footholds in industry and government — and thanks to another guise of Magda’s, they may have just gotten a city councilman in their pocket.

It’s cool though, because in his spare time Nathan Lane is hunting the Nazis and laying out elaborate yarn-walls to track their agents. I have a feeling I’m going to love his character.

The premiere has definitely set the stage, and while I’m sure there will be many more twists to come in this narrative, it’s already a promising start. I just hope the show leans more heavily on the supernatural elements Penny Dreadful is known for, because everything else feels… too painfully familiar. Kraft’s message to the locals during his march? “America first, America always.” Then there’s the scene where Raul confronts the city council to protest the motorway development, asking where he should go once he’s displaced. The answer, of course, is “back where you came from” — despite the fact that Raul was born in the same hospital the city councilman was. I absolutely agree that America hasn’t changed a whole helluva lot since, well, ever. But where Penny Dreadful gave us monsters and showed us their humanity, City of Angels is giving us humans and proving they’re monsters — and that may be too much for me to take right now, if I’m being honest.