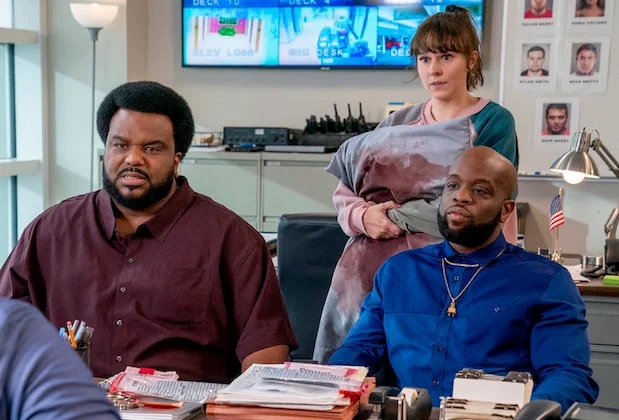 There are a lot of streaming services, and those streaming services air a lot of content. Some of them fly so far under the radar that I’m not aware of them until a friend and colleague writes about a new crop of working-class sitcoms and includes among them Killing It, a comedy from Dan Goor and Luke Del Tredici (Brooklyn Nine-Nine) recently picked up by Peacock for a second season.

Killing It stars Craig Robinson (The Office) as Craig, a divorced, unemployed, and subsequently homeless father and entrepreneur seeking to fulfill the American Dream by investing in a dubious million-dollar idea. But first, he needs $20,000 in seed money, which he seeks by entering into a contest to see who can kill the most Burmese pythons (so many pet pythons have been let loose in the Everglades of Florida that an entire python population of giant snakes has sprung up, and the government is paying people to kill them).

It makes for a compelling premise (snake killing!) with a lot of comedic potential (pythons eating humans!), but that’s only a small part of what makes Killing It a comedy worth seeking out. The other is the chemistry between Craig and the partner he teams up with in this pursuit, Claudia O’Doherty’s Jillian. Jillian is likewise in dire straits, a kind-hearted Australian who works a number of gig-economy jobs and pulls a mobile billboard behind her Uber (she also lives inside the mobile billboard). She partners with a reluctant Craig mostly, it seems, because she wants a friend (and she agrees to invest her potential share of the winnings in the same, uh, scam). O’Doherty and her doofus charm (think female, Australian Jack McBrayer) almost single-handledly keeps the first couple of episodes afloat before the comedy finds its legs, the cast starts to gel, and the series takes off, navigating the disposal of a dead body, obnoxious social media stars, and expensive self-help seminars. Robinson plays a (mostly) loyal straight-man to O’Doherty’s kooky, upbeat but slightly melancholic character with a hilariously depressing backstory.

The cast of misfits, by the way, also includes Isaiah (Rell Battle), Craig’s shady brother looking for a shortcut to the same American Dream; Brock (Scott MacArthur, who was so good in Kaitlin Olson’s The Mick), an aspiring YouTube star in the same snake-killing competition; and Tim Heidecker, who plays an unscrupulous millionaire motivational speaker who accidentally murders his son and outsources the body’s removal.

Killing It isn’t exactly reinventing the wheel — the indignities of poverty are not new to the medium — but in addition to being generally funny, increasingly absurd, and consistently entertaining, it’s an incisive satire about capitalism and the sacrifices (mostly of the soul variety) one has to make to capture the illusory American Dream (the snakes are also a metaphor). Those who achieve it still have to live with themselves. Unfortunately, those who work hard and play by the rules have to live inside their mobile billboards.

There’s a lot to be said, however, for embracing it with a sense of humor.


← Jesus, Jesse Garon Presley, and the Nightmare Fuel of Baz Lurhman's 'Elvis' | The Good News About the 'The Walking Dead' Universe Is Tinged with Bad →