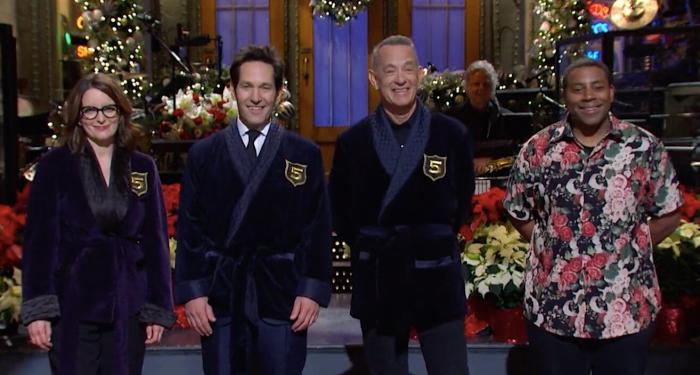 Cold Open — As you probably know by now, it was a weird cold open. The cast and most of the crew were sent home because of COVID, so Tom Hanks came out to a tiny audience of crew members(?) to tell everyone that the show was sort of canceled, but he still brought out Tina Fey to introduce Paul Rudd to the 5-Timers Club. Steve Martin (and Martin Short) also help do the honors with a taped sketch. The rest of the show will be a mix of pieces taped earlier in the week, and old skits. (Score: Yeah, I don’t know)

Home Goods — Rudd plays a director of a commercial asking moms (Aidy Bryant and Kate McKinnon) what they want for Christmas, and all they want are grandchildren, which you can’t buy at Home Goods. And then they convince the director that he wants grandchildren. It’s amusing, but this all feels eerie. Atta Girl, Kelsey. (Score: 6.5 out of 10)

An Evening with Pete — This one, they finished taping at 5 a.m. on Saturday morning. It’s 2054, and Pete Davidson is old and still doing “Weekend Update” segments with a Colin Jost robot in a dinner theater. It’s the best-acted thing that Davidson has ever done (and I’ve seen all his movies). It’s sweet and elegiac and kind of lovely, even if Rudd is basically playing his The Shrink Next Door character. (Score: 8 out of 10)

Weekend Update — Jost isn’t there, so Tina Fey — who was going to join Che — sits in a chair with Che and reads their jokes to Hanks, Kenan, and Paul Rudd. It’s awkward and weird, and the jokes aren’t that great, but it’s good to see Fey in the role again. (Score: 5 out of 10)

The Christmas Socks — It’s a song about a pair of Christmas socks, and a bird that is quiet, and I’m pretty sure this clearly Kyle Mooney song would have been cut for time any other week. I refuse to give it extra points despite the situation. It may have been one of the worst sketches I’ve ever seen. (Score: 1 out of 10)

Overall, not a very good episode, but also kind of cool to see them actually put a show together in the midst of all of this, which is to say: It wasn’t good, but it was memorable.