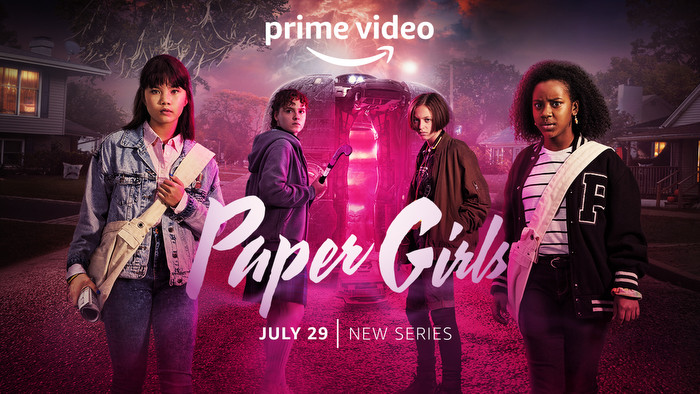 Let’s get the inevitable Stranger Things comparisons out of the way: this show is also about a group of young teens in the 1980s who find themselves caught up in a dangerous sci-fi adventure to save the world. Now that’s settled, let’s discuss the multiple ways Paper Girls, the newest series from Prime Video, stands apart from Netflix’s tentpole series. The first thing to know is that Paper Girls predates Stranger Things, beginning life as an Eisner Award-winning hit comic series by writer Brian K. Vaughan back in 2015, which completed its run four years later, followed by the adaptation officially becoming green-lit in 2020. As far as the plot is concerned, broad strokes aside, the differences between the two series are nearly endless, as Paper Girls follows four teen girls as they traverse through time while trying to evade death and war in an attempt to make their way home. Throughout all of this, each girl must cope with their own personal struggle, a task that becomes increasingly complicated when their future becomes known to them. The only thing more discomforting than knowing one’s future is MEETING one’s future, as we see from the newly released official trailer:

At first glance, the show appears to be making a concerted effort to emphasize the more humorous tones found in the (fairly dark) source material, which makes Ali Wong an excellent choice to play the Adult Erin (Young Erin is played by Riley Lai Nelet). Big-name aside, I suspect the actual draw will be the central young cast members, each of whom looks as though they stepped right off illustrator Cliff Chiang’s pages and directly onto the screen. For more details, check out the official synopsis below:

In the early morning hours after Halloween 1988, four paper girls—Erin, Mac, Tiffany, and KJ—are out on their delivery route when they become caught in the crossfire between warring time-travelers, changing the course of their lives forever. Transported into the future, these girls must figure out a way to get back home to the past, a journey that will bring them face-to-face with the grown-up versions of themselves. While reconciling that their futures are far different than their 12-year-old selves imagined, they are being hunted by a militant faction of time-travelers known as the Old Watch, who have outlawed time travel so that they can stay in power. In order to survive, the girls will need to overcome their differences and learn to trust each other, and themselves.

Based on the best-selling graphic novels written by Brian K. Vaughan and illustrated by Cliff Chiang, Paper Girls is a high-stakes personal journey depicted through the eyes of four girls, played by breakout leads Camryn Jones as Tiffany Quilkin, Riley Lai Nelet as Erin Tieng, Sofia Rosinsky as Mac Coyle, and Fina Strazza as KJ Brandman. Ali Wong also stars as the grown-up version of Erin, with Nate Corddry as Larry, and Adina Porter as Prioress.

All eight episodes of Paper Girls will premiere on Prime Video on July 29.

Kaleena Rivera is the TV Editor for Pajiba. When she isn’t replaying the trailer to verify that yes, that was indeed Jason Mantzoukas providing that voiceover, she can be found on Twitter here.

← Are Chris Rock and Lake Bell Dating? | In Cancellations, Prime Video, HBO, and Showtime Pull the Plug on Three Series →