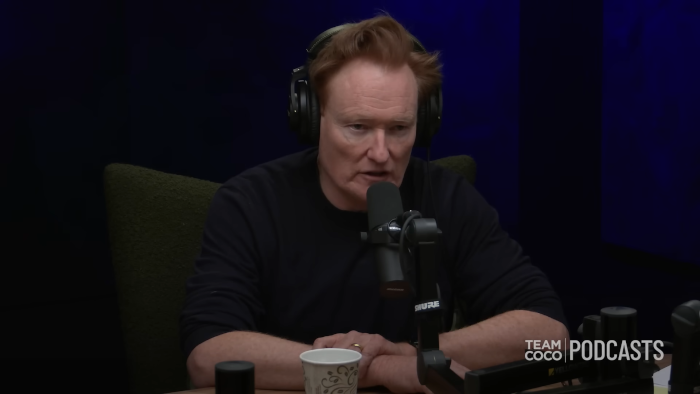 I am not six-foot-five. My hair is not a shocking shade of red. The skin on my body isn’t pale like freshly laid snow. I did not go to Harvard. In short, I’ve never really related to Conan O’Brien. That was until, while recording a recent episode of his podcast, one of his engineers was revealed to have been watching that day’s World Cup match between Mexico and Saudi Arabia. His response can only be described as supportive bewilderment.

Eduardo, one of Conan’s engineers, set up an extra monitor to watch the World Cup while recording Conan O’Brien Needs A Friend and he was found out! Conan playfully berates him at first, but then allows him to keep watching the game. I’ve worked for people who got mad if I responded to a text from my wife ten minutes before I was supposed to leave, so even if Conan is playing for the cameras here, I like it.

I am not a soccer fan. I follow baseball and hockey and that’s about it. While I may not enjoy soccer, I know how much joy baseball and hockey bring me, so I’m always happy for American soccer fans for that period every four(?) years when America acts like the rest of the world and watches soccer. That said, things can get pretty sad for sports fans. In an incredible live moment, Eduardo watched his favorite team (Mexico) get eliminated from the World Cup in real-time while recording the podcast. Going through a tough loss and then having to talk to human beings is no easy feat.

Enjoy your soccer at work. Stop by a pub to cheer on your squad. Get dressed up, gather some friends, and enjoy yourselves. Everything sucks. If you can get even a modicum of happiness from watching a bunch of people chasing a ball and trying and kick it in a net, go for it. I’m not even being sarcastic, I’m happy for you, and so is Conan! But if your team loses, prepare to face the tall, redheaded consequences.


← Elon Musk Roundly Booed During an Awkward Onstage Appearance at a Chappelle Show | Reddit Asks the Question: 'What's the Worst Mistake You've Seen Someone Make at Their Job?' →