On a Momentous 'Survivor' Episode, The Game Reflected Reality In All the Worst Ways

A couple of years ago, a character named Zeke — who was in his second season of Survivor — was outed as trans by another player. It was maybe the most upsetting Tribal Council I’d seen in nearly 20 years of Survivor, but to the show’s credit, it ended up becoming a transformational moment in the series. Gameplay considerations were put aside, and the player who outed Zeke was immediately voted off by unanimous consent; Jeff Probst did not even go through the formality of voting. He just told Jeff Varner goodbye and sent him on his way.

It became a huge moment for trans awareness on the series, and Zeke became one of the most popular players in Survivor history (although, Zeke was popular before he was outed). The way it happened was terrible, and it obviously would have been better if Zeke had been able to finish out his second season without the public finding out, because Zeke had wanted to be known simply as Zeke, and not “Zeke, the trans player.” At the same time, Zeke became the face for a lot of transgender issues during the height of the bathroom bill bullshit; Zeke educated a lot of people on the show and watching from home, and ultimately, it all became so normalized that Zeke was just Zeke — he was voted out several episodes later not because he is trans but because he was seen as a dominant threat, a reputation he earned. It provoked a lot of conversations in middle-America living rooms that season, and actually gave my wife and me a nice opportunity to talk to our own daughters at length about trans issues.

Survivor can be surprising in that way, sometimes. In fact, a few weeks ago, an otherwise liberal-seeming grad student referred to the buff of a Black player, Jamal, as a “do-rag,” which prompted an insightful and thoughtful examination of white privilege on the series. Again, for much of Survivor’s massive audience, it may have been the first real conversation about white privilege they’d ever witnessed. Jamal has been a remarkable player this season, if only for his penchant for surfacing social issues, even as he exhibits his own blind spots when it comes to gender (recall a couple of weeks ago when Jamal struggled for hours to make fire and wouldn’t give the flint up to a female player who eventually managed to light a fire in seconds).

Granted, if you follow any of the Survivor blogs or keep up with any of the behind-the-scenes business, there are a lot of issues regarding gender and especially race that are hidden away from the audience in editing, but Survivor has nevertheless sparked a lot of conversations around social issues for the last two decades. In my experience with my family, it’s been a net positive for the way it has presented these issues from the perspective of real people living those experiences who we feel like we get to know fairly well over the course of the season.

Ultimately, it’s what made last week’s episode so disappointing. The double episode was one of those situations where, instead of modeling appropriate action, Survivor reflected reality, and when it comes to sexual misconduct and the MeToo movement, reality is painfully, depressingly miles behind where it needs to be.

The short story is this: Kellee (my favorite player this season) had been experiencing a lot of unwanted touching from a player named Dan, a Hollywood agent. After the merge, Kellee bonded with another player named Missy (another of my favorite players until this episode) over their shared, uncomfortable experiences with Dan. Having found an ally in Missy (and ultimately another player, Elizabeth), Kellee felt more comfortable in talking about her experiences with Dan. She tearfully opened up during a confessional, which got so intense at one point that a producer from behind the camera actually spoke up, a rarity on Survivor. It was also maybe the ickiest real-life sequence in Survivor history because it revealed so many of those moments captured on camera in which Dan casually and inappropriately touched Kellee and Missy.

“This isn’t just one person. It’s a pattern,” Kellee says in the confessional. “It’s a fucking pattern. It takes five people to be like, yeah, man. This is real. What I’m feeling is actually real. It’s not in my head. I’m not overreacting to it. He has literally done these things to five different women in this game. That sucks,” she continues through tears. “It totally totally sucks.”

“You know, if there are issues to the point where things need to happen, come to me and I will make sure that stops,” the producer says off-camera.

And that’s the thing: What she just tearfully detailed were issues that the producer needed to address with Dan. That’s exactly what Kellee did right then. She outlined the issues on camera, and as though nothing she had said in the last three minutes had been spoken aloud, the male producer says, “Well, if there are issues, come to me.”

THAT’S EXACTLY WHAT SHE JUST DID. This is when Dan should have been booted from the series, full stop, when a woman outlined her experiences and those of four other women, all of which were captured on camera. 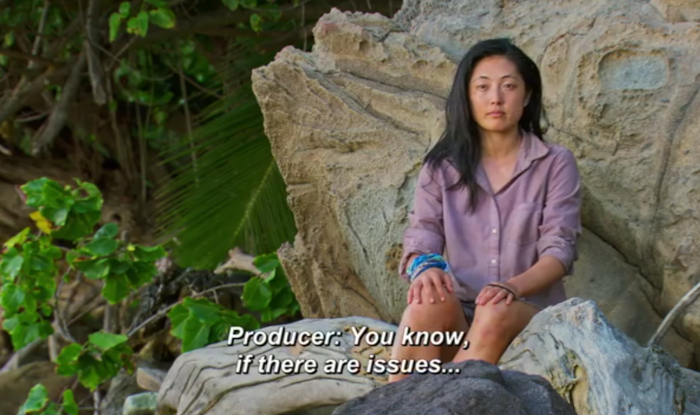 In either respect, the whole thing went from bad to worse after that, because unlike in the Zeke Tribal Council, gameplay considerations were rolled into real-life considerations. Janet, an older woman, decided to put gameplay aside and, for the benefit of the women experiencing the unwanted touching, put together an alliance to vote out Dan. However, Missy and Elizabeth — two of the women who claimed to have experienced unwanted touching from Dan — ultimately injected gameplay into the situation and essentially exploited the opportunity to vote out Kellee, who had been targeting Missy.

(Note for those who haven’t watched Survivor in a few years: Modern gameplay favors mediocrity; since the year that Yul won, probably, the biggest physical threats, the smartest and the most likable players are early targets, which is why Missy and Kellee — two smart, likable players and otherwise natural allies — targeted each other, despite the fact that they otherwise seemed to bond).

In the end, at Tribal Council, that’s exactly what happened: Kellee was voted out by an alliance led by two women, who, as it turns out, exaggerated their experiences with Dan to blindside Kellee. Kellee, in fact, was so sure that the other female players would do the right thing instead of the strategic thing and vote out the creepy guy that she was blindsided with two idols in her possession.

Then it got worse because, after Kellee’s exit, Janet confronted Dan, Missy, and Elizabeth back on the island. Dan continued to insist that he did nothing wrong, and when forced to voice their concerns about Dan in front of Dan, Missy and Elizabeth both ultimately admitted they played up Dan’s unwanted touching (and both have apologized* on social media since the episode aired). Janet — who was just trying to do the right thing — felt so alienated that she nearly quit at the next Tribal Council.

(*Note here that Elizabeth and Missy are appropriately getting heaps of criticism for their role in all of this, but I want to briefly add that, contrary to the existing narrative, they didn’t completely make up their experiences — we saw some of them, on camera (Dan reaching out for Missy’s toes, for instance, or throwing his arm over her while they’re sleeping) — but rather, they exaggerated about how uncomfortable those experiences made them feel.)

Instead, Jeff Probst gave everyone an opportunity to air it all out, and this is where I thought Survivor would turn the corner and finally suss out the issues and address them appropriately. It did not happen. In fact, only after Jeff refused to let it go did Dan deliver an extended non-apology apology — one of those “If what I did made you feel uncomfortable” apologies — while also talking at length about what a good guy he is, what a loving husband he is, and how aware he is of MeToo because it hit his industry first. Meanwhile, Kellee — who had been voted off and was watching from the jury box — could not say a word, per the rules of the game. She was literally bound by the game from speaking up while the men in the Tribal Council defended Dan. The men — and some of the women — continued to insist that what Kellee experienced wasn’t real, that it was part of her gameplay strategy, and one of the male players, Aaron, even had the audacity to say, “If this was truly a general tribal concern, I would have been involved, Tommy would have been involved, and Dean would have been involved.” In other words, if Dan was actually harassing Kellee and the other women, Aaron is saying that they would have come to the men to voice their concerns.

That’s when I had to pick my jaw up off the floor so I could drop it again.

Jamal, one of the few players remaining who actually seems to have a grasp of the issue, did speak up. “That’s exactly what happens in the real world, guys. When a woman brings up a charge and people want to negate that it’s legitimate, they say, ‘Well, if it was such a big issue, she would have brought it up [before]. We are not entitled to know things just because we are men.” Aaron, however, clapped back with, “I have two sisters, and a mother, and most of my clients are female,” at which point I pulled out my last remaining hairs.

And who gets voted out? Aaron, who doesn’t understand sh*t about MeToo? Or Dan, the guy who keeps touching women inappropriately? No. They voted out Jamal, the one male player remaining who could actually speak to these issues thoughtfully, while Janet — who had acted only to protect other female players from Dan — got a few votes, as well. Her takeaway from the entire experience? “I was wrong to get involved,” which is the exact wrong lesson she should have taken away in a situation where she stood up for women.

This is exactly where Jeff should have done what he did during the Zeke season, where he basically made up the minds of the rest of the cast members on their behalf, where he could have put aside gameplay considerations, and where he should have made the decision to vote out Dan on their behalf. It’s what he did for Zeke, and it’s what he should have done for Kellee, who detailed all the moments in which Dan made her feel uncomfortable, all of which were captured on camera. What’s a woman have to do to be believed and taken seriously?

I’ll give Probst this much credit: He sussed out all the issues, and he provided the right context. He provided a stage for all of these issues to be addressed, but then … he did absolutely nothing about it. He asked the players if they could separate real-life from the game, and they said that they could, and then Jeff goes right ahead and mixes real-life back up with the game. “This is why Survivor is so complicated to play, but so compelling to be a part of … now it is time to vote … if anyone has a hidden immunity idol, now is the time to play it.”

“Survivor does mirror real life at certain points in time,” Lauren tearfully says near the end of Tribal Council. It is both a painfully accurate statement and a damning indictment of the way Survivor handled this entire mess.