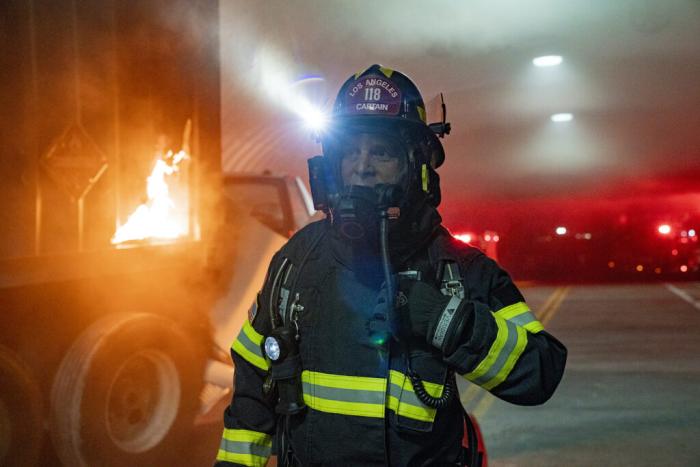 '9-1-1' This Week: Meteorites, Radioactive Sludge, And Some Speedy Resolutions

I don’t know anymore, y’all. I just don’t know. There used to be a time when I got frustrated about every cliffhanger, afraid 9-1-1 would drag its drama out for weeks at a time. I mean, remember literally every time Chim’s been injured?! Now, though? Now the show seems to be playing whack-a-mole with its own character crises, introducing hurdles only to resolve them almost immediately, so that none of the drama has any weight at all. Buck’s big dang lawsuit was settled in the span an episode, and not only does he have his job back but nobody seems to be holding a grudge against him either. Athena took the law into her own hands just two episodes ago, and she’s already off suspension and back on the job. And Hen, who accidentally killed a young woman in a traffic accident at the end of the last episode, with lots of onlookers and heavy exposition about how this would all lead to a huge departmental investigation to determine her guilt?

Oh yeah, she’s already been cleared of any responsibility and is good to go back to work by the start of this week’s episode. Literally all that was resolved off-screen between episodes! The investigation showed that she pressed her traffic signal button and did everything right, but the switchboard glitched and didn’t change the light for the crossing traffic. It wasn’t her fault — though that doesn’t mean she doesn’t feel any guilt. She spends the entire episode trying to figure out whether she’ll ever be able to trust herself enough to return to her job, until a serendipitous meeting with the first woman whose life she saved convinces her that… well, basically that saving lives matters, I guess? I mean, it’s more complicated than that, but the point is that by the end of the episode she’s healed enough to come back to work and start driving the firetruck again, so it’s almost like that ENTIRE DEEPLY HORRIFYING ACCIDENT didn’t happen at all.

Oh, who am I kidding. I’m just glad Hen is back in the truck with Chim! PRIORITIES!

Maddie’s weird stalker storyline was also wrapped up this week, in a manner that proved she was right all along but also managed to be a bit of a gut punch. Basically she gets a call from Tara, who shot her violent husband in self-defense and asks Maddie for help. Maddie arrives and starts patching the dude up, even performing a “finger thoracostomy” (a real thing!), all while trying to convince Tara that life will be much worse if her husband dies and that she needs to call 9-1-1. The husband makes it to the hospital and survives, and he also tells the cops that he shot himself in order to protect Tara. Basically, the couple thinks this incident will be some sort of fresh start for them if they can just forgive each other for the way they’ve treated one another. So … they learned nothing. Maddie walks away, realizing she can’t save Tara if Tara doesn’t really want to be saved, and instead Maddie doubles down on her own therapy to try and unpack her feelings around killing her ex-husband.

This week’s episode was titled “Fallout,” not only because it was busy resolving a bunch of emotional trauma and guilt for the main characters but ALSO because an 18-wheeler full of radioactive sludge explodes in a tunnel — and that leads me to what appears to be another touchy situation with a speedy resolution. Bobby kicks the rest of his team out of the tunnel so they can meet with the HAZMAT teams that are stuck in traffic, while he stays behind to buy them some time — singlehandedly attempting to contain a chemical fire with a single extinguisher until back up arrived. His actions saved the life of the truck’s driver and prevented the disaster from spreading, minimizing the radioactive fallout (GET IT), but it also meant that he was exposed to high radiation levels.

So: IS BOBBY DYING?!

Well… not yet, at any rate. The episode almost immediately cuts to him in the hospital receiving the results of his tests, which are all almost normal (barring some trace amounts of the cobalt-60 in his urine). He’s supposed to be monitored for a few more weeks just to make sure he’s alright, so this could still come back to bite him in the ass. The show seems to be clearing the board as it prepares for its mid-season break, so perhaps this incident is over the same way all the other crises have also been resolved this week.

Or maybe 9-1-1 is giving Bobby cancer for Christmas…

Well, I guess that’s it for this week. Nothing else of note happened. Nothing crazy. Nothing whatsoev—

Oh, did I forget to mention that in the cold open this week, a woman got HIT BY A METEORITE?! Yeah, that happened. Blew a hole right through her, but she survived thanks to the insulating effects of her cozy weighted blanket, and also the fact that the space rock cauterized the hole as it passed through her. As you might expect, this case is inspired by real events — with a twist. In the episode, the victim was going through a serious patch of bad luck, and this seemed to be crap cherry on top of her sh*t sundae… until it actually proved to be the best thing that happened to her. Not only was she lucky to survive being, you know, HIT BY A METEORITE, but it’s such also such a rare, near-impossible occurrence that it made her famous. Her life gets better because of this injury, and by the end of the episode she’s making inspirational social media videos.

That’s basically the exact opposite of what happened to Ann Hodges, the only woman in the world to have actually been hit by a meteorite (that we’ve got documented evidence of, at least). Like in the episode, Ann was on her couch under a quilt when the 8.5 lb meteorite tore through her ceiling and hit her — though it only bruised her side. This happened in Alabama in 1954, and it was only the start of Ann’s troubles. Despite surviving the incident, she ended up in a long legal battle with her landlord over ownership of the valuable space specimen. In the end, her landlord gave up the fight and she won the rock, but by then all interest in it had subsided and she wasn’t able to sell it. Instead, she used it as a doorstop. Meanwhile the stress from her legal woes led to a decline in her mental and physical health and likely contributed to her divorce from her husband. In 1972 Ann passed away from kidney failure, as the relatively young age of 52.

The lesson? Social media notoriety and weighted blankets will save us all!

← Why I Love Lewis Capaldi, Despite Hating His Music | Baby Yoda Toys Won't Be Available Until 2020 →