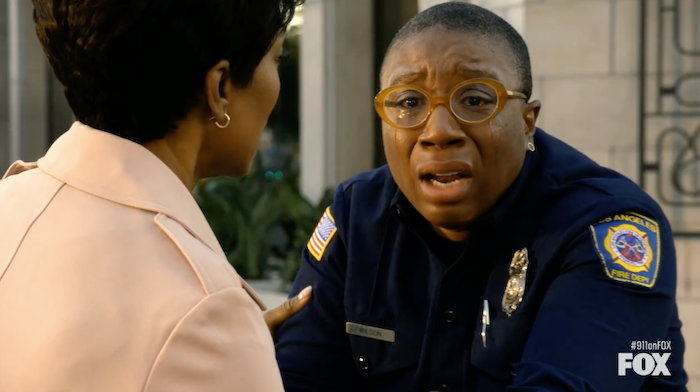 First off, I owe you all an apology. I was out of town last week and didn’t have a chance to talk about 9-1-1, which was a shame because it was the LONG-OVERDUE ATHENA BACKSTORY EPISODE! Quickie recap: Athena’s first fiancé — the man who inspired her to join the LAPD in the first place — was shot and killed in 1991, and after nearly 30 years a chance break in the case allowed Athena to finally bring his killer to justice. It’s a bittersweet ending, but let me tell you — when Angela Bassett cries, I cry too. Oh, how I cry.

Thankfully things seems to be back to normal this week, if you consider an ice rink disaster involving several severed fingers and a figure skate lodged in a man’s chest — all caused by a single stray sequin — to be “normal.” So, yes, completely normal by 9-1-1 standards. While I didn’t find a single real life incident that was quite this bloody, it’s no secret that ice skating is a shockingly dangerous sport: in 2007, pairs skater Jessica Dube received over 80 stitches after her partner’s blade slashed her cheek, just to name one example. And yes, sequins are a documented hazard on ice! Last year a taping of the British reality series Dancing on Ice had to be halted so the crew could clean the ice after one skater’s costume started shedding sequins. If a toe pick catches one, it will stop the skate dead in its tracks — which can be dangerous when the skater is moving into a complicated maneuver at high speeds.

Mostly this cold open was just a set up for a very basic punchline, in which Bobby revealed his own past as a junior figure skating champion and got this response from his teammates: 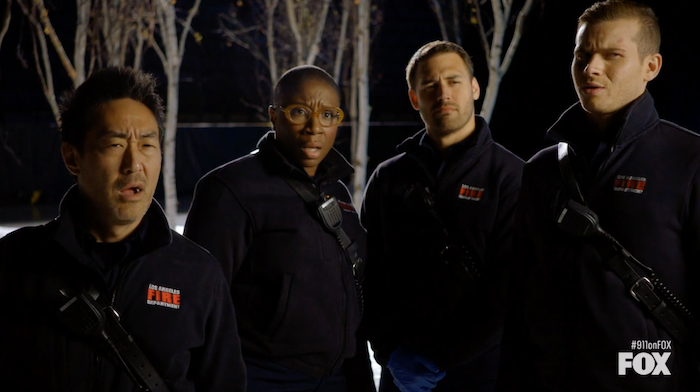 With that one shot, I was primed for another classic episode of high-stakes hilarity and outrageous gore… which means that OF COURSE the episode ripped the rug out from under me in its the final moments, when Hen accidentally killed a young woman.

The title of this week’s episode was “Malfunction,” though the theme really should have been “Distractions Kill.” One man has a heart attack in his self-driving car, programming it to drive him to the hospital just before he passed out — only for the car to drive him THROUGH the hospital, pinning a doctor to the wall in the process (this was probably inspired by the man who had a heart attack in his autonomous-driving Tesla in 2016). In another case, a warehouse employee working for Amazon an unnamed online retailer faces stiff competition from his robotic colleagues, who can pack the goods faster and don’t require pee breaks. So he pees on one out of spite… and then it goes nuts and knocks a shelving unit over on top of him. But the real distraction of the episode is the one keeping Hen from performing at her full potential during these emergencies, as her mind is consumed with concerns for Karen. After the reveal a few weeks ago that the IVF process had not yielded viable embryos, Karen sank into depression and grief at her loss — and Hen isn’t sure what to do. She’s angry that Karen is neglecting the family and leaving their son Denny to fend for himself, and she’s also just scared. Though she’s able to confide in Athena about her troubles, she doesn’t tell any of her teammates (though they clearly can tell something is up with her, and are worried). Finally, it’s Chim who manages to snap her out of it, because he needs his partner — and because with their job, lives are literally at stake if you’re not on your A game.

Unfortunately, just as it seems Hen has regained her focus, she drives their engine through an intersection — and t-bones an on-coming car, killing its young driver in the process. So, after Buck’s dumbass lawsuit was finally settled, it looks like we’ll be facing another investigation on 9-1-1 — but the question is, will Hen be found responsible for the accident?

Here’s what I know: When going through intersections during emergencies, there is a “traffic pre-empt” button that drivers can press to change the traffic lights, allowing them to proceed while halting the other cars. Hen presses the button while her light up ahead is still red, but we don’t get a shot to show if the light actually changed before she proceeded into the intersection. She was talking with Chim, who was in the back tending to their patient, so maybe she pressed the button too late or maybe didn’t press it hard enough for it to register. If that’s the case, then the driver she hit may have still had a green light going into the intersection.

I don’t think that will prove to be the case, though. For one thing, there was an overhead shot of the intersection that showed that another car, in the lane next to the driver in question, did come to a stop at the light, so either their light had changed to red or they at least heard Hen’s siren. There is a moment where the victim accepts a call from her mother while driving, but she hangs up right before she goes into the intersection — so it’s debatable whether that would have been sufficient distraction for her to run a red light OR miss Hen’s siren. Ultimately though, it may not matter a whole lot what actually happened, because Hen clearly believes she’s at fault, and a lot of witnesses overheard her crying and saying as much publicly. When it comes to the investigation, Hen will need to state what she remembers — and in her mind, all she remembers is that she killed a young woman.

For the sake of the show, I hope we don’t lose Hen — but I’ll be honest, I’m really curious as to how this is going to play out (and how much time it’ll take away from the usual lunacy, dammit!).

← This Week on Podjiba: Which Streaming Service Would You Take To A Deserted Island? | Historic Impeachment Hearings Begin Today →