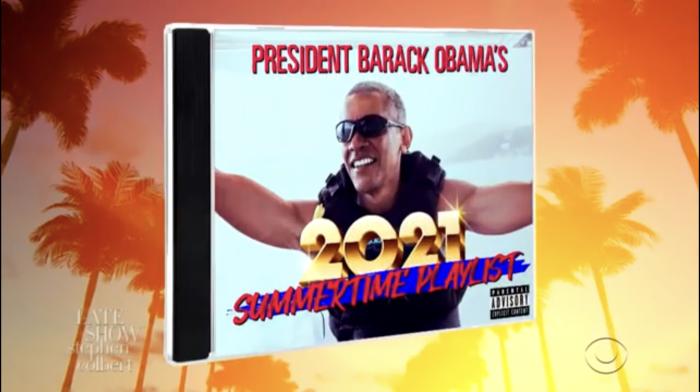 Can you truly have a chill, white boy summer without knowing the pop playlist of a former President? I think not! Barack Obama, the most chill of the ex-presidents (aside from Jimmy Carter) recently released his playlist of summer jams. He’s done this before, but according to The Late Show With Stephen Colbert, this time is different.

In one of the latest episodes of Colbert’s show, things kicked off with a cold open sketch about Obama’s Playlist. Complete with a parental advisory sticker, we get a look at the list of songs like it were some midweek afternoon commercial. But rest assured, there is by no means a subliminal message in this commercial! Certainly, Obama would never use this opportunity to cast doubt on the insane claims of another, less cool former president!

JK, that’s exactly what happens! And it’s hilarious! The whole bit, which is pretty straightforward, is sold in such a way that just when you think it won’t be funny anymore, it keeps going. It’s also a wonderful one-two punch of Obama making a playlist with a super-liminal message and also discovering what songs that entails. Message or not, Obama choosing “Crack” by Two Chains is pretty damn funny.

A quick side note: I love hearing the audience laugh at the jokes in real-time. Things in the world aren’t back to normal yet, but regaining small semblances of normalcy like that just really helps me make it through the morning.

← Coffee Time with Korg & Deadpool | Am I Judging 'The White Lotus' Unfairly? (Also 'Loki' On This Week's Podjiba!) →