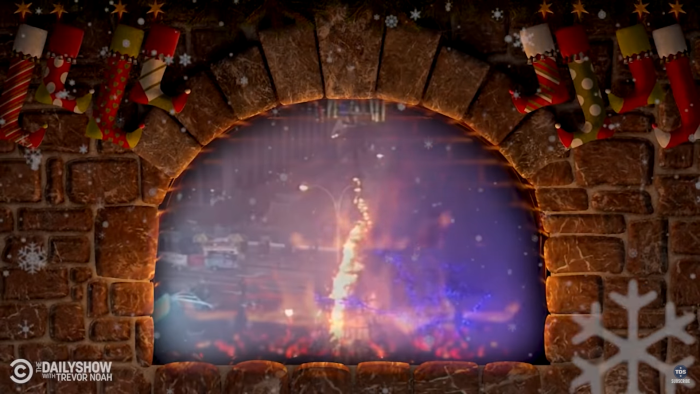 No Chimney? 'The Daily Show' Has You Covered (With A Little Help From Fox News)

In the before times, when my wife and I would throw Christmas parties, I would put a video of a burning Darth Vader on our tv. It made our one-bedroom, NYC apartment feel like a cozy, country home. Norman Rockwell himself would marvel at the coziness of the Sith Lord’s body crackling for hours after his estranged son laid him to rest. My wife and I aren’t having a Christmas party this year, thanks to the seemingly endless hellscape we all occupy. If we did, we’d probably switch things up a bit thanks to The Daily Show.

One of the bigger surprises of the holiday season so far was the burning of the Fox News Christmas tree. The most surprising thing about it? I had no idea they even had a tree. 30 Rock is right around the corner, I mean, what’s even the point? I don’t think anyone would have noticed the network’s dinky tree had some jerk not burned it down. Instead, we’ve spent what feels like ages hearing about it. Fox has treated this act of vandalism like it was a terrorist attack.

This should come as no surprise. Fox loves playing the victim. There’s no way they’d pass up a chance to be actual victims. However, it seems their victim response playbook was lifted directly from an actual tragedy. The Daily Show threw together a mash-up of clips. It shows people from the Bush administration addressing 9/11, and people from Fox News addressing the burning of a Christmas tree. One that was easily replaced, no less.

It may not be the corpse of the man who was once Anakin Skywalker, but The Daily Show presents the clips as if they are burning in a lovely chimney. It’s only a minute and a half, so I wouldn’t have been able to use it for too long, but you can guarantee I would have played it at least once. After all, it is the holidays.


← 'Hawkeye' Season Finale Recap: 'So This Is Christmas' | Peter Dinklage's Explanation for the 'Game of Thrones' Finale Backlash is Baffling →