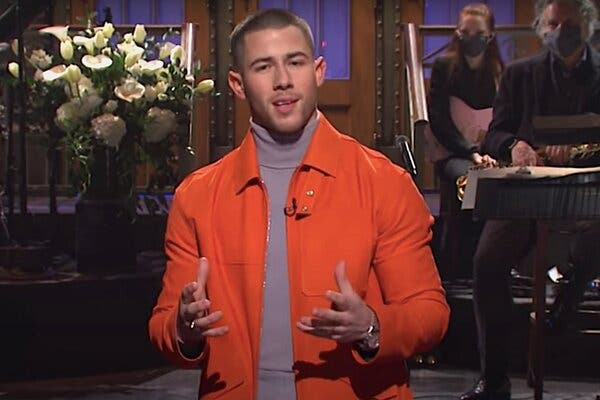 Cold Open — Kate McKinnon’s Dr. Fauci plays a game called, “So You Think You Can Get the Vaccine,” where a number of people try to make their case for eligibility in front of a panel of judges: Governors Newsome, Cuomo, and Whitmir. Decent, and it successfully pokes at a sore spot nearly everyone in the nation who thinks x, y, or z should go first has! (Score: 5 out of 10)

Nick Jonas Monologue — I don’t know a lot about Nick Jonas, other than the fact that he’s married to Priyanka Chopra, and that I guess he’s the more famous of the Brothers? Here, he makes a self-deprecating joke with his brother (in the audience) comparing themselves to the Hanson Bros. (well done!), and sings a pandemic song, and he at least has the voice for it. Nicely done? (Score: 5 out of 10)

Mirror Workout — It’s some sort of new technology where people in your mirror guide your workouts, except that there’s an old lady (McKinnon) trapped inside of the mirror, who can’t get out. I bet this one killed at the table read! It did not kill here. (Watch here) (Score: 4 out of 10)

Murder Show — I know a lot of people who will empathize with this song, which is about what a lot of women like to do when they get some time alone: Watch murder shows. I like murder shows, too, but not in the sense that I watch them to relax, which is a whole thing to a ton of people. I think it’s the predictable nature of the murder show formula. I wrote about it once, and about how the first six scenes of every single episode of Castle are the same, and a lot of folks in the comments got really defensive! (Score: 8 out of 10)

Cinderella’s Slipper — So, the slipper is tiny. Super tiny, which leads to a disturbing discovery: Prince Charming banged a mouse. Big swing! And a whiff! (Watch here) (Score: 4 out of 10)

Bachelor Party — This song is perfection. It’s about the inexplicable but long-held tradition of men getting together and having a stripper over for the bachelor party, so they can all sit together with their bones. Why in God’s name is this a thing? You’ll appreciate this one, too Mat, because they sing boner a lot! (Bonus: It made my kid very uncomfortable!) (Score: 9 out of 10)

Weekend Update — Colin and Che turn in a decent set of jokes, although Colin may have found his muse in Ted Cruz, who is “always the kill in F, Marry, Kill.” Kenan’s LaVar Ball returns, and not even Kenan can save it (although, Kenan is fun (watch here), and Cecily Strong — who always plays unhinged and/or drunk women — comes out as Marjorie Taylor Greene to discuss “science,” and Strong is expectedly perfect. (Score: 6 out of 10)

Viking Voyager — A group going on an amusement park ride has an odd man out, who keeps having to go on the rides with a stuffed guy from Soul. Very Mooney. Very bad. (Watch here) (Score: 2 out of 10)

Post-COVID Dating — Kate and Nick play two people on a date for the first time since the pandemic, and they don’t quite know what they’re doing anymore. It’s wonderfully silly. (Score: 6 out of 10)

Home Makeover — The cut-for-time segment is one of the best of the night: They give two single guys the perfect home makeover. (Score: 7.5 out of 10)

Note, too, that after episodes five weeks in a row, SNL is taking a long break until March 27th, with host Maya Rudolph.

← 'WandaVision' Finally Toys With the 'Is Wanda a Mutant?' Question | The 2021 Golden Globe Winners →