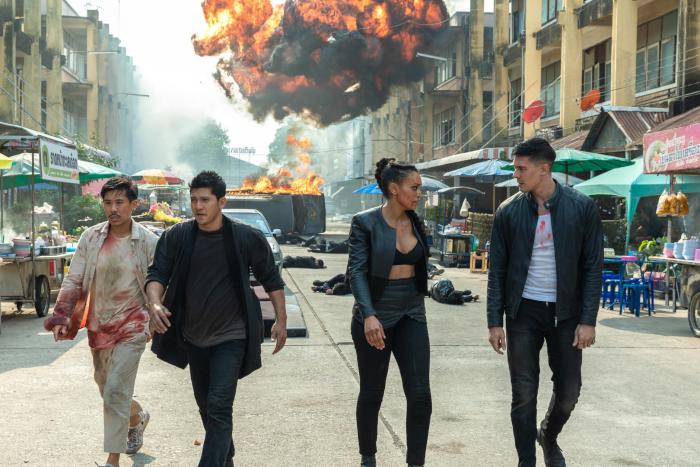 Netflix was almost onto something great with 2019’s Wu Assassins, an original supernatural martial arts series with one helluva hook: Buffy, but make it the dude from The Raid. Iko Uwais played Kai, an ordinary chef in San Francisco’s Chinatown who inherited the magic of 1,000 monk ghosts and set off to fight some elementally charged modern warlords with ties to the Triad. He even had his own Scooby Gang of childhood friends by his side: car thief Lu Xin (Lewis Tan, Mortal Kombat), f*ck-up Tommy (Lawrence Kao, The Originals), and Tommy’s concerned sister Jenny (Li Jun Li, Sex/Life). It wasn’t a great series in terms of, like, plot or dialogue or production values, but it was a fun series. The action was solid, the cast had chemistry for days, and it didn’t take itself too seriously. It was good enough that, despite the flaws, I wanted more. If Netflix is gonna keep driving truckloads of money to Dave Chapelle, the least they can do is send a few buckets over to Uwais, right?

Netflix apparently agreed, only instead of investing in a second season of Wu Assassins, they changed the format to a movie installment, and it seemed like the best of both worlds. More Wu Assassins, but this time leaning all the way into the cheesy 90s action flick vibe of it all by making it an actual action flick. With only 90 minutes the fighting can be non-stop, the plot can be streamlined, and the budget can go directly into the special effects. Everybody wins!

Ahem. Well, the good news is that Fistful of Vengeance is a fitting sequel to Wu Assassins. Specifically, it has the same strengths and the same weaknesses — all of them, to a T. Like not a single lesson was learned. The dialogue is still laughable, the actors are still charming, the soundtrack still does a lot of heavy lifting, and the fight scenes are great when the showy camerawork doesn’t get in the way of them. The old mythology about the monk ghosts is mostly abandoned — no random Mark Dacascos cameos, sadly — and instead a NEW chapter of the Wu Assassin backstory is added which also makes little sense. The plot, though, remains the biggest hurdle, and it’s a problem from the jump. Fistful of Vengeance moves the action from San Francisco to Thailand, where Kai, Lu Xin and Tommy are on the hunt for Jenny’s killer. Now if you’re like me, this turn of events may have confused you slightly. “Wait a minute, Jenny died at the end of Wu Assassins? Huh, I guess I forgot more of that show than I realized.” So I went back and rewatched the season finale and y’all — Jenny was alive and well by the time the credits rolled. There was a bit of a cliffhanger ending hinting that there is more work for Kai to do as the Wu Assassin — the building shakes as Kai’s ghost mentor Ying Ying (Celia Au) appears to explicitly tell him he’s got more work to do, and also maybe she’s actually real and not a ghost?! It was also revealed that the villainous Zan (JuJu Chan Szeto) was in Macau trying to recruit Triad allies after killing her former boss (and Kai’s adoptive father) Uncle Six. So like, there were plot threads — in terms of the mythology, and for revenge — already waiting for continuation.

Instead, the movie (written by Cameron Litvack, Jessica Chou, and Yalun Tu — all of whom worked on Wu Assassins and specifically the season finale) asserts that somebody fridged Jenny off-screen after the season’s end, but she managed to grab ahold of a mysterious pendant as she died and that’s the lead that brings her friends to Bangkok. The pendant belongs to a bigwig in Thailand’s criminal underworld, Ku An Qi (Rhatha Phongam), who is … chaos incarnate, I think? Her twin, the yang to her yin, is a tech mogul named William Pan (Jason Tobin, Warrior), and he infodumps some backstory that ties their existence to the Wu Assassin and you know what? It doesn’t matter. This new mythology just adds up to Kai being the only one who can stop another world-ending threat, which — again — he only stumbled into because Jenny was killed. Or was he led to it?

The twists in the journey are as half-baked as the premise is, and equally as infuriating — or would be if the plot weren’t so perfunctory. Pan asks Kai and co. to stop Ku An Qi, which they’re happy to do since they want revenge anyway, and once that’s established the movie can proceed straight to its main selling point: THE ACTION. It’s hard to go wrong when you have two of the best martial arts performers working today together on screen, and when Uwais and Tan cut loose the movie finds its footing. Director Roel Reiné treats every action sequence like its own mini McG music video, stylized to absurdity and backed by a killer beat. When it works, the fun is undeniable. One long showdown in a hotel seamlessly weaves together a shootout, a car chase, and Uwais’s top-notch fisticuffs all at the same time, the camera zooming from the balcony to the parking garage to the lobby and back to catch all our players in action. Later, a street fight at an outdoor market finds our heroes grabbing makeshift weapons from booths and food carts, which gives Kai a chance to combine his cooking skills with his Wu Assassin prowess while wielding a pair of meat cleavers. Sometimes, however, the fancy camerawork actually detracts from action. In one part of the film’s climax, Kai fights a mind-controlled Lu Xin, and it should be extraordinary. Uwais vs. Tan! Stick it in my eyeballs! It should be THE fight sequence of the whole shebang, the one we should be thinking about when the movie’s all over. So it’s baffling when the camera starts swinging in 90-degree arcs, around and around the fight, and the actors have to hit their marks and hold after every move while the camera catches up, resulting in a stilted sequence that makes it look like they’re pulling their punches. Instead of directing to the fight choreography, the fight is playing to the camera’s choreography and I’m sorry but I didn’t come here to witness the immense star power of — checks IMDb — a dude who directed an episode of Black Sails. I realize that “less is more” was never going to be the motto of a franchise about a fighter imbued with the combined energy of a thousand dead monks, but I’ll settle a franchise that gets the hell out of Iko Uwais’s way.

In the end, Fistful of Vengeance is not a good movie, but then again Wu Assassins wasn’t technically a “good” show. If you liked it anyway, then yes — you should give Fistful of Vengeance a shot. Heck, if you never watched Wu Assassins but are curious if you might dig it, then do it backward and start with the movie! The runtime is shorter, the plot isn’t going to make sense anyway, and you’ll get a solid sampling of what made the show tick. Despite all the imperfections, the saving grace of the show and the movie both is that they don’t take themselves too seriously. They are a fun, thoroughly fine diversion — and sometimes that’s all that matters! As a fan, I’m disappointed the creators didn’t take this opportunity to improve on the formula the show laid out, but I just can’t seem to stay mad at it either. There are precious few majority Asian productions coming out of Hollywood — The CW’s Kung Fu and Cinemax’s Warrior are the only two shows I can think of off the top of my head — so yes, I’m hoping Fistful of Vengeance paves the way for more sequels to come. Uwais, Tan, and all the actors deserve better material, and maybe the Wu Assassins franchise could be that material one day. The potential is there. Until then, it’s a paycheck, and we all know Netflix hands those out for far worse things than this.


← 'Kimi' Review: Zoë Kravitz Shines In a Good, Not Great Soderbergh | John Mulaney Does What Mulaney Does and Delivers the Best 'SNL' of the Season →