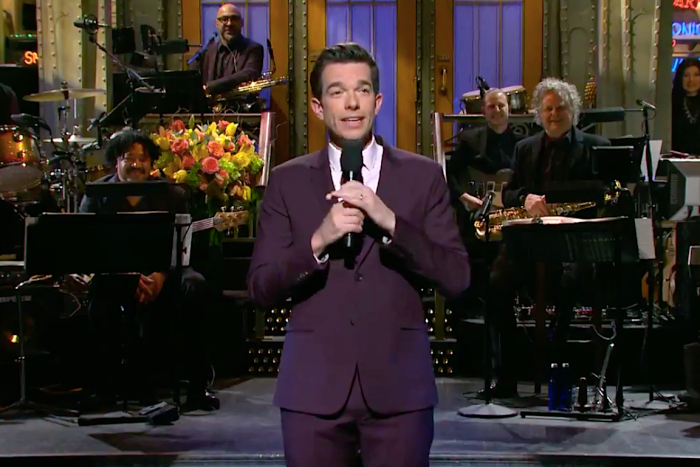 Cold Open — The episode opens with a performance from Ukrainian Chorus Dumka of New York because — post 9/11 — Lorne Michaels can occasionally be thoughtful. (Watch Here) (No score. It’s the thought that matters.)

John Mulaney Monologue — Whatever else you want to say about Mulaney’s personal life — it’s messy, but it’s his personal life — he’s a very funny man. His monologue probably takes from his current stand-up material about his drug abuse, intervention, and recovery, and it is hysterical. (Score: 8 out of 10)

Monkey Judge — John Mulaney plays Judge Tango, a monkey, and he behaves as a monkey judge might. It’s silly, but also pretty funny. During a stacked show, it’s not funny enough to get its video embedded. (Watch Here) (Score: 6.5 out of 10)

Blue River Dog Food — A couple in a grocery store who take their pets very seriously shame a woman into buying better dog food for the health of her dog. (Score: 6.5 out of 10)

COVID Dinner Discussion — Over dinner, a group of very liberal friends confront news that maybe the masks were not all that effective after all, and they all freak the hell out at the notion that anything other than overzealous mask-wearing and hating anti-vaxxers could be the right choice. Hilarious, and a little uncomfortable. (Score: 8 out of 10)

Five-Timers Club — Since the Ukrainian chorus opened the show, the Five-Timers skit is pushed into the middle, featuring Tina Fey, Steve Martin, Candice Bergen, Elliot Gould, Paul Rudd and, for some reason, Conan O’Brien. It’s tremendous. (Score: 8 out of 10)

Weekend Update — The rest of the show is so good that this week’s “Weekend Update” is all jokes, and jokes only. And they were … decent! (Score: 6 out of 10)

Subway Churro — The expected big, Broadway sequel to Diner Lobster, etc., centers on buying a churro in a subway station. They pull out all the stops, and it is glorious. (Score: 8 out of 10)

Behind the Slime — A look back at the history of Sliming on Nickelodeon, including earlier versions of “You Can’t Do That On Television” where the consistency and method of delivery were experimented with. I won’t say anything else so as not to spoil it, but this is incredible, and the Mat skit of the night. (Score: 8.5 out of 10)

Cupid Shuffle — Mulaney plays a white guy attending a Black family reunion with his girlfriend, and finds that he fits in better than her. The worst skit of the night might have been the best skit of some other episodes. (Watch Here) (Score: 5 out of 10)