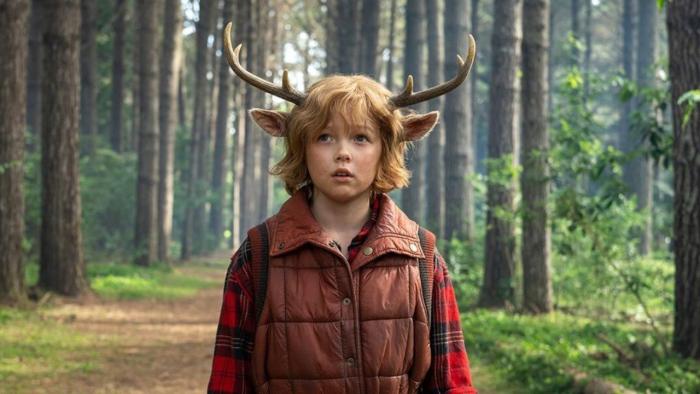 Gus is the human-hybrid at the center of Netflix’s latest foray into genre television, an adorable 10-year-old fawn-boy with the manic energy, earnestness, and fondness for sweets of Will Ferrell’s character in Elf. Taken into the Yellowstone forest soon after his birth by his Pubba (Will Forte), he’s essentially given the Hanna treatment, hidden away from mankind and taught over the course of a decade to live off the land, care for himself, and avoid humans.

But unlike Hanna, Gus is no killing machine, although he does have a keen sense of smell. He and his father are tucked away in a remote forest to avoid a deadly virus that has wiped out much of humanity, and because many of those who remain are afraid of the human hybrids that have been born to every woman since the Great Crumble, a pandemic that has given rise to a kinder, gentler, and far more adorable replacement species.

After his father dies, however, Gus is left to fend for himself until Tommy “Big Man” Jepperd (Nonso Anozie) comes along and rescues him from a pair of Last Men, a nefarious group of hunters trying to wipe out the hybrids. Big Man is the lone wolf type but begrudgingly agrees to help Gus navigate his way to Colorado, where Gus believes his estranged mother lives. The two forge an unlikely friendship, meet others along the way, encounter bad men, and otherwise hew fairly close to formula, although there is a lot of novelty in the world-building, an imagined future where animals are not only trying to reclaim the land but humanity itself.

There’s more to it, of course. There’s a timid woman named Aimee (Dania Ramirez) who finds new life as a caretaker inside of a zoo, where she endeavors to provide a safe haven for otherwise homeless hybrids. There’s also a faction of Peter-Pan-esque orphaned teenagers, led by Bear (Stefania LaVie Owen), who wear animal masks and seek to protect the hybrids from The Last Men. Meanwhile, a doctor, Aditya Singh (Adeel Akhtar), who lives in a dystopian suburbia is tasked with finding a cure for the virus while also keeping his nosy neighbors from learning that his wife is infected, lest they burn them alive. 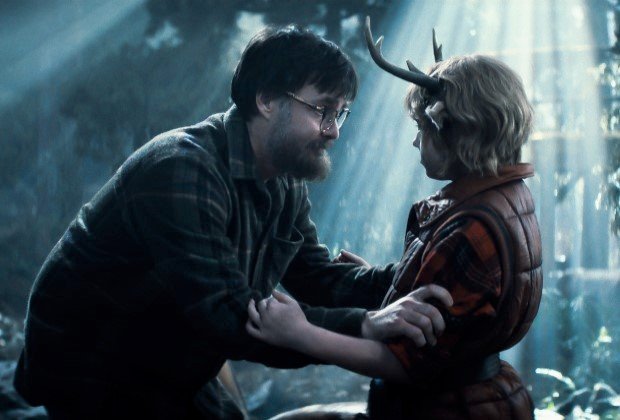 What sets Sweet Tooth apart from other post-apocalyptic series of this ilk, however, is its sweet and infectious nature. Yes, there are bad people with guns and tanks, and the infected are burned alive inside their homes, but Sweet Tooth nevertheless has a big heart and an imaginative spirit. Adapted from Jeff Lemire’s comic book limited series by Beth Schwartz and Jim Mickle — the latter of whom directs half the eight episodes — the tone is reminiscent of Spike Jonze’s whimsical Where the Wild Things Are (what happened to Max Records?) while there’s a very Tom McCarthy-esque dynamic between Big Man and Gus.

It’s that endearing relationship that carries Sweet Tooth through some of its more predictable twists and turns, and Christian Convery and Nonso Anozie are so good together, it almost doesn’t matter that we’ve seen the nattering, pestering kid wear down the grumpy emotionally unavailable killer a thousand times. They are a marvel together, and while James Brolin’s narration is a little pat, he gives the series some of that Sam Elliot gravitas. Will Forte, meanwhile, doesn’t have a huge role in the series, but he is brilliantly cast as a well-meaning father turned survivalist who is clearly in over his head.

There’s also a welcome family-friendly vibe to Sweet Tooth, at least for middle-school kids or older (if they can handle Iron Man 3, Sweet Tooth should be fine). The adorable hybrids are like candy cigarettes, a sweet and delicious gateway drug to something far more dark and sinister, but the ebullient spirit and the hope (“coming out of its pores!”) is enough to offset some of the more treacherous moments. It’d a goddamn splendid series, and despite the pandemic at the center of it, there is no better time to watch than now.


← Adrian Grenier Finally Concedes He's the Heel of 'The Devil Wars Prada' | 5 Shows After Dark: 'The Republic of Sarah' Premiere The CW, 'Housebroken' on Fox →