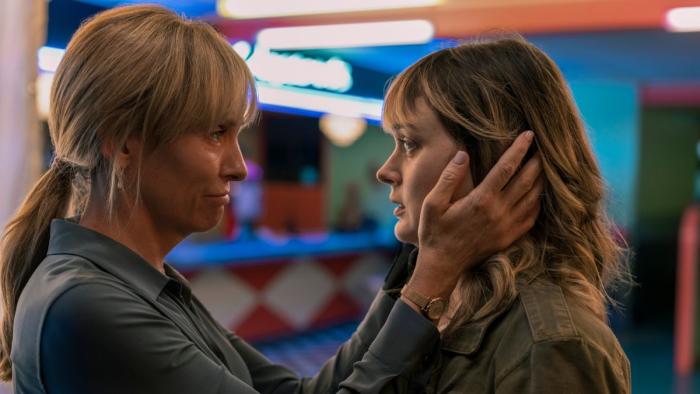 Toni Collette is a divine being sent from Heaven with whom we are all fortunate to share time on the same planet. Even Collette, however, cannot redeem what is one of television history’s most worthless characters in Netflix’s Pieces of Her. She is portrayed by Bella Heathcote, who should not shoulder any direct blame for her character’s good-for-nothing existence. She plays Andy, the daughter of Collette’s Laura. Andy is the worst kind of character because the plot of an entire eight-hour series is singularly propelled by her stupidity. It’s not that she makes one idiotic mistake that puts the story into motion. It’s that when confronted with a decision — any decision — she always makes the wrong choice, and nearly every action in this series is motivated by a need to rescue her from her own needless mistakes.

Pieces of Her begins in a small-beachside town of Belle Isle, Georgia. Andy is 30 years old, still lives with her mom — having moved back home to nurse Laura through chemotherapy — and works as a uniformed 9-1-1 operator. One day, while having lunch in a diner with her mom and talking about her dead-end existence, a creepy dude walks in and starts shooting. The man’s hope is that the stand-off ends with suicide by cop, but is furious to learn that Andy is neither a cop nor is she armed. Before the man can shoot Andy, Laura — who had been lying on top of a useless Andy during the entire ordeal — stands up and confronts the shooter. He tries to stab Laura. The knife goes through her hand, but she is able to turn it on the shooter and slash his throat. It’s a promising start to the series, but it goes downhill from there.

Laura is a hero, and local reporters waste no time reporting on the story. In doing so, Laura’s face is splashed across television screens, which is when we learn that Laura is not who she says she is. She’s been living in Belle Isle for 30 years under a different name, and not even her daughter knows about her past. With her photograph appearing in the news, that past is about to come looking for her, so Laura gives her daughter a suitcase of money and one simple order: Get in the car and drive to Maine and don’t talk to anyone or do anything until she hears back from her mother.

It should be simple enough, and if Andy had only listened to her mother, there wouldn’t be much of a show. Unfortunately, Andy decides instead to investigate her mother’s past so that she can understand what she’s running from. From the very beginning, it does not go well. In fact, as Andy begins to investigate, she runs toward the very people who want her mother dead. Moreover, despite the fact that she’s carrying a huge suitcase of money and knows that her life is in danger, Andy decides to trust nearly every person she encounters except her own mother, including a stranger she meets in a bar who she immediately asks to give her shooting lessons.

I don’t want to reveal much else for those who feel compelled to watch anyway because what little mystery exists is the only thing that keeps Pieces of Her propped up, at least until the central mystery is revealed about halfway through and the series continues to limp to its inevitable conclusion. I will say that it concerns a conspiracy that involves a do-gooder hippie cult from the ’80s, a vice-presidential candidate, and the identity of Andy’s biological father. Collete is great, though it is decidedly not the kind of role where she is a secret assassin who starts shooting people in the face and kicking them over balconies. There are also a few solid turns from the likes of Terry O’Quinn (who plays Laura’s father in flashbacks); Jessica Barden (The End of the F***ing World), who plays young Laura; Joe Dempsie (Gendry!), and the always reliable Gil Birmingham.

What you also need to understand is that those who watch will probably spend much of their time rolling their eyes, sighing loudly, and saying things like, “Are you f**king kidding me? Has this woman ever made a good decision in her entire life? Also, why did she just flash stacks of cash to a used car salesman while trying to negotiate a price on the car?”

She is beyond annoying, all the more so because her stupidity repeatedly blows up her mom’s plans. Laura is given little time to act because she spends much of the series reacting to her daughter’s mistakes. Andy’s stupidity not only further endangers her mom’s life, but gets the few people Andy can actually trust killed in their attempts to save her from her own dumbassery. And if you don’t believe me, here’s a small sampling of the reactions to Pieces of Her on social media, where over 90 percent of the tweets concerning this show are about how awful Andy is:

Mom: How the f**k can your idiot ass be my mf'n daughter? pic.twitter.com/7QJyTyH4aN

Andy is the most insufferable character I’ve ever had to watch. Between the teenage angst at 30 and her flopping around while bullets fly by her face I’m ready to mute the show every time I see her on screen #PiecesOfHer

Reassuring to find so many folks who also can't stand the daughter in #PiecesOfHer. My love of Toni Collette may not be enough to make me push through. Also, my cat is tired of me yelling at the TV about all the stupid decisions this character is making. What dreadful writing.

Made it to episode 4 of #PiecesOfHer and gave up. The daughter is so irritating, totally ruins the show, should have got shot in the opening scene, letting Toni Collette do her thing.

Andy from ‘Pieces of Her’ is the most infuriating character I’ve ever encountered. Survival instincts on straight 0. YOU HAD ONE JOB, and you want to play mf’n Nancy Drew. I honestly wished they offed her. #PiecesOfHer

#PiecesOfHer daughter has clearly never watched any movies, tv shows, read a crime thriller, a bazooka joe comic…any of these things could have perhaps helped her to make less dumb moves.

← A Look Back At 'Batman: The Animated Series' In Honor Of Its 30th Anniversary | 'Pam & Tommy' and How the Patriarchal Justice System Fails Victims of Sex Crimes →