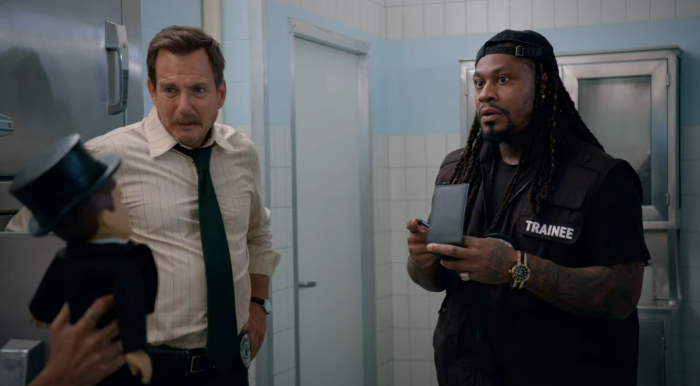 Netflix’s ‘Murderville’: Improv Is About to Have a Moment, Isn’t It?

I don’t think I’m alone when I say that improv has always come off as sketch comedy’s sweet but sorta nerdy kid brother. Of the comedic art forms, it seems to rank just above ventriloquism in terms of uncool pursuits, easy fodder for comics to cannibalize—John Mulaney notably has a bit in which he states of a legally incriminating correspondence, “Of all the sentences in that email, I would be ashamed to have read out loud in a court of law, I think the top one is ‘See you at improv practice,’” a punchline that admittedly makes me laugh to this day—despite the skill level it takes to execute with even the slightest amount of success. This goes a long way to explaining why as I watched Murderville, the improv comedy-murder mystery starring Will Arnett, I found myself quietly rooting on every single participant even when the act winds up fumbling. It may not always work, but at least someone is having a good time.

The premise is fairly simple: Arnett plays homicide detective Terry Seattle, and like most stereotypical fictional mid-to-late career cops, he’s saddled with a new partner. In this case, said partner is a guest star who has no script and is forced to improv their way through a murder investigation and, with any luck, manage to pay just enough attention to various clues to successfully guess the murderer’s identity at the end. This proves harder than expected since there are plenty of distractions, namely from Arnett himself, who has a grand time messing around with his scene partners, providing a diversion whenever there’s information to be had. When Arnett pours what looks to be roughly half a bottle of hot sauce on Conan O’Brien’s now-hellaciously spicy sloppy joe, I’m pretty sure the winning lotto numbers could have appeared on screen and I still wouldn’t have noticed them. These moments of absolute silliness are the highlight of this six-episode series, though they rely heavily on the guest star’s responsiveness. O’Brien is a master of self-deprecating humor, so when Arnett goes about his business of setting up a joke, he takes full advantage. During a bit in which he tells a suspect that his childhood tormentors grew up to be senators, when asked to name one, without even a moment’s thought he responds, “Dianne Feinstein,” completely breaking his scene partner, along with probably every single viewer.

There’s a ton of moments like that, and not just with the great Conan O’Brien. Kumail Nanjiani was my personal favorite, with his ability to inject his particular brand of incredulity into one single word (Seattle: “What’s your definition of sex?” Kumail: “…Sex.”). But the big laughs don’t solely belong to seasoned comedic performers; NFL star Marshawn Lynch has emerged as a fan favorite, easily making up for his lack of acting experience with his warm affability, which he has in spades:

Seattle: “By the way, how much homicide investigative training have you had?”
Lynch, brightening: “I watched Training Day!”

Oftentimes, even the breaks are hilarious, though I have to acknowledge the performer who played the victim in Nanjiani’s episode, who somehow managed to just barely maintain his dead appearance as Kumail pulls out a prop enclosed in his mouth. Indeed, the whole ensemble that make up each episode deserves acknowledgment, especially Haneefah Wood as Chief Rhonda, Seattle’s soon-to-be ex-wife, and Phillip Smithey as Daz, the fellow detective who’s a professional rival, only to end up a romantic rival as the show develops the running plotline that connects the otherwise unrelated episodes together.

The laughs are abundant here, though it’s not perfect. As much as Sharon Stone is a surprising delight (her commitment is unmatched), Ken Jeong’s and Annie Murphy’s appearances are fairly disappointing. Jeong’s jokes don’t land, while Murphy’s straight man act reads as timid instead. It’s a disappointing performance, especially since we know just how funny she can be. This all goes to show that having the ability to turn in a great comedic performance—which Murphy is more than capable of—doesn’t guarantee an amusing improv performance. Despite the general fun of the other episodes, all of them suffer from the 30 plus minute run time, which makes even the funniest episodes feel sluggish toward the end (Jeong’s feels interminable). Despite its lack of finesse, however, Murderville is the kind of silly romp that many viewers are craving during these contentious times. Who knows? Maybe it will finally elevate the art of improv for those who disparage the art. But I bet good money that Will Arnett and crew are having too much fun to care.

Murderville is available to stream on Netflix.

Kaleena Rivera is the TV Editor for Pajiba. When she isn’t endlessly giggling over Marshawn’s “No, that’s Chucky, they just put a suit on him,” she can be found on Twitter here.