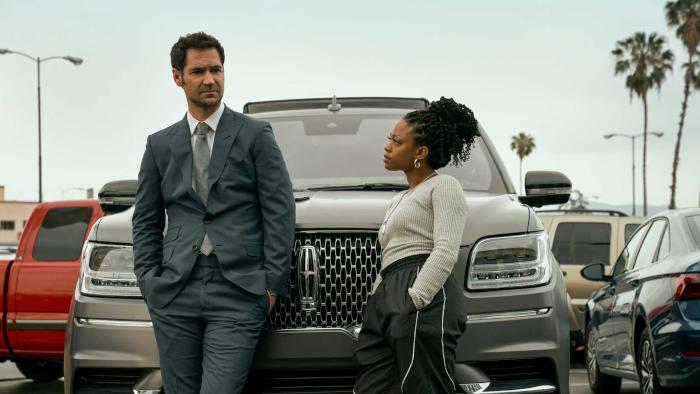 Netflix's 'The Lincoln Lawyer' Is Not Bad

In 2011, Matthew McConaughey starred in The Lincoln Lawyer, a big-screen adaptation of Michael Connell’s series of legal thrillers featuring Mickey Haller. It was much better than it had any right to be, like one of those old-school Grisham movies back when legal thrillers could still earn a buck in theaters, like A Time to Kill, The Rainmaker, or The Pelican Brief.

Though Grisham continues to churn out (increasingly bad) novels, David E. Kelley has, in some ways, become his spiritual successor. When he’s not adapting Liane Moriarty novels, he’s the guy you grab for your legal dramas from L.A. Law to Ally McBeal, The Practice, Boston Legal, Harry’s Law, HBO’s The Undoing, Netflix’s Anatomy of a Scandal, and Prime Video’s Goliath. It is insane how prolific Michelle Pfeiffer’s husband continues to be in his 60s, particularly given the non-legal shows he also continues to write (currently Big Shot on Disney+ and Big Sky on ABC). Kelley can do kid-friendly series, network television, and prestige television, and he even has time for the occasional Stephen King adaptation, like the solid three seasons of Mr. Mercedes that he created and no one watched.

Netflix’s The Lincoln Lawyer falls somewhere squarely in between network television and a prestige drama, not unlike his Billy Bob Thornton Prime Video series Goliath. It’s not immersive, brilliantly acted must-see television, but it’s not a case-of-the-week procedural, either. It’s an escapist legal thriller that is neither dumb nor particularly taxing, the kind of series that will probably satisfy fans of Goliath and The Practice, or those of us who wished The Undoing spent more time in a courtroom.

Manuel Garcia-Rulfo stars as Mickey Haller, a brilliant defense lawyer known for working mostly out of his Lincoln Navigator. When the action picks up, Haller has been out of work for over a year, owing to a prescription drug addiction he developed after a surfing accident. His second ex-wife, Lorna (Becki Newton) is also his paralegal and biggest supporter, while Haller is still hung up on his first wife, Maggie (Neve Campbell), with whom he has a teenage daughter.

Haller has been nearly pushed out of the game by his addiction until a colleague of his is shot and killed by a hitman and leaves his entire practice to Haller, his clients and existing cases included. Among those clients is Trevor Elliott (Christopher Gorham), the owner of a video-game company accused of murdering his wife and her lover. But first, Haller has to convince Elliot to keep him as his lawyer, and then Elliot has to convince Haller not to ask for a continuance because Elliot is determined, for reasons that won’t become clear until later, to move ahead with a murder trial only a week after a new lawyer comes on.

There’s also the matter of the dead colleague and the police investigation into it. Elsewhere, Maggie — who is a Los Angeles prosecutor — is pursuing a case of her own against an abusive sex trafficker. That case, along with several others that Haller oversees along with the murder trial, interweaves into the Elliot case. Although he has an office — where his second ex-wife and her boyfriend, the investigator Dennis (Angus Sampson) work — Haller still mostly works out of his Navigator, having hired a client, Izzy (Jazz Raycole), who couldn’t afford to pay him as his driver.

It’s a 10-episode series, but Kelley and his co-creator Ted Humphrey (The Good Wife) manage to keep a lot of balls in the air and mostly avoid the Netflix bloat. Both Humphrey and Kelley have enough experience with network television to understand that season-long arcs are better when they’re broken up by a number of self-contained cases. There’s enough going on to keep it entertaining, but not so much that it ever gets too busy. The cast feels like something off of the old-school “Characters Are Welcome” era of the USA Network, and the tone — in spite of the heavy subject material — is mostly light, with an occasional dose of humor. It all makes for a remarkably easy series to binge and, despite the much better shows on television right now, Lincoln Lawyer has a certain Bosch-like feel that makes it ideal weekend viewing.


← Netflix's 'Our Father' Sells Itself Short by Trying to be a Horror Movie Instead of a Documentary | Honk Honk: 'Titane,' 'Crash,' and Good Old-Fashioned Car Sex Movies →