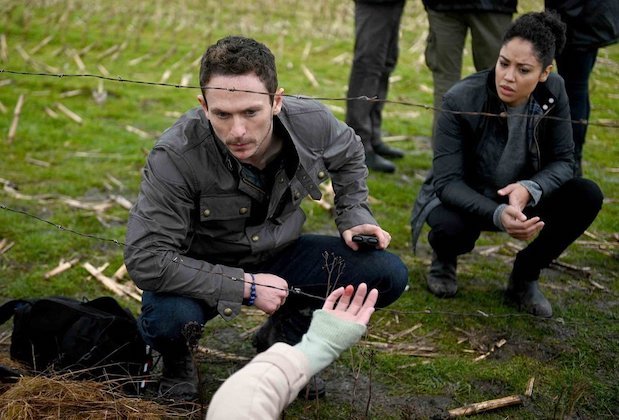 NBC's 'Debris' Review: This Show May Be Too Eager to Please

You ever been on a date or started a flirtation with someone who’s a little too eager? When everything starts off pretty decent but then they begin to edge towards being a bit too much? For example, instead of letting the conversation naturally ebb and flow, they seem obliged to fill as much silence as possible. Or they start to overshare just a little too much, and you feel compelled to steer the conversation elsewhere before anything too embarrassing comes out. You think there’s a possibility you like this person, but right now the best thing they could do is chill the hell out before you two take things much further.

As I sat down with NBC’s newest dramatic sci-fi series, I was feeling pretty hopeful. Granted, I did go in with some wariness. After all, NBC has … well … a bit of a reputation, you might say. “But this time might be different,” I tell myself. Besides, it’s got some elements that really do it for me. Now that it’s the next morning, however, I find myself trying to figure out whether I actually had a good time or if it’s just been too long since I’ve been excited over an original property.

Debris follows a pair of agents, Bryan Beneventi (Jonathan Tucker) and Finola Jones (Riann Steele), as they investigate “debris events” following the explosion of a massive spaceship whose debris has been steadily falling to Earth for the last six months. As we find out in the show’s cold open, this isn’t simply a matter of recovering extraterrestrial materials; these pieces cause unpredictable and potentially very harmful effects on any human that interacts with them. For Finola, retrieving the debris and understanding their properties not only presents the possibility of using the science to aid mankind, it also advances the work and legacy of her now-deceased father, astrophysicist George Jones (Tyrone Benskin). Bryan, on the other hand, is of a more pessimistic mindset, countering her with an, “in the wrong hands it could be the end of humanity.”

It has a fairly exciting start, despite the fact that it is stuffed to the gills with exposition. Coupled with the fake technical jargon that comes at a machine-gun pace, it’s a challenge to catch everything that’s going on. The writers seem to be in a footrace to make sure we have as much information as quickly as possible. When Bryan is casually popping candy into his mouth and Finola asks him, “Did you take those from the hotel?” I expect a bit of banter to happen, something to show us the professional dynamic that’s emerging between these two colleagues. Instead, with nary a response from him, she immediately launches into, “Why do you do this?” in order to provide background information that isn’t entirely necessary for the story at this time. It’s an ever-so-slightly awkward off-beat moment, of which there are several in this episode.

Plot-wise, things start getting weird when a woman who appears to be dead is found floating in a Kansas field. Once Finola and Bryan arrive, as this is clearly some sort of debris event, they and their crew follow the floating body towards its apparent destination, only to come across a deeply unsettling sight. It’s a pleasantly freaky moment, and I hope the show finds more of that freaky-deaky spirit. But as Finola and Bryan try to track the source of the Kansas debris event, coming to the realization that they’re suddenly in a race against time, things start taking an unexpectedly emotional turn. Normally, I would welcome the willingness to get in touch with deep feelings, but remember, we’re still on our first date. I kind of want to get to know a person before we start alluding to painful pasts and deep trauma. Let’s get dinner and a movie first, eh? It feels too early to try to insist on this level of emotional investment when we’ve known these people for such a short period of time. I’m not going to say exactly how all of this wraps up, but it does involve essentially Care Bear Staring the source of the problem, i.e. locating the solution not through science but through feelings. I strongly suspect this alone will be enough to turn off some viewers. I’m curious to see if this is going to be a habit or if it’s simply a one-time stunt to get folks attached.

Jonathan Tucker is hell-bound and determined to sell the hell out of this. I haven’t seen a guy choke back this many deep-seated feelings since Sterling K. Brown on This is Us. He has an alluring presence and moves like a man who knows it. Riann Steele’s performance feels slightly held back, and while Finola is clearly intended to be more soft-spoken than her more swagger-y counterpart, I hope she gets room to loosen up a bit. Ultimately, shows like this live or die by their leads’ chemistry, and Debris is currently trying to fake it by pretending the connection’s more substantial than what we’ve witnessed thus far. I think if the show relaxes its hold on the procedural formula—and keep its plot slightly less convoluted—in favor of allowing these two to interact on a more basic level, good things could come of this.

I want to like this show, but I need it to freaking relax a bit. I could also use some very basic questions answered, namely why the heck do these two seem so very unconcerned with approaching debris (with zero physical protection, no less) despite knowing what sort of catastrophic effect it can have, as well as why they never have backup. If this show can establish more of the sci-fi aspects and wait until more of those big emotions are earned, as opposed to trying to use them as a shortcut for familiarity, this can be a worthwhile way to spend an hour a week.

So yeah, I plan on seeing it again next week. I’m not sure what our plans are, and please, don’t even ask me if I think this is gonna go somewhere, it’s way too soon to tell. For now, I’m just keeping things casual. Who knows? If it plays its cards right, it might even get lucky.

Debris airs every Monday on NBC at 10pm EST.

Kaleena Rivera is a tv and film writer. When she’s not pondering the height of Jonathan Tucker’s hair, she can be found on Twitter here.