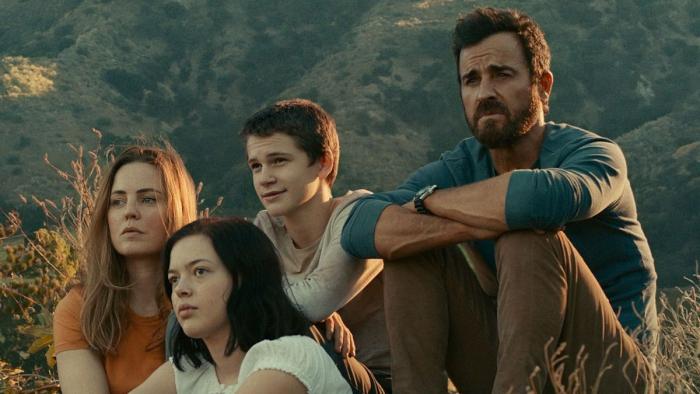 Having now watched all seven episodes of the first season of Apple TV+’s Mosquito Coast, all I can muster is a full-throated, “That’s it?!” That’s not an indictment of the show, exactly. It’s an effective cat-and-mouse thriller with great cinematography, a strong cast, and intense action sequences.

But that’s it. After seven episodes, we know who the mouse is — the Fox family (Allie, Margot, Dina, and Charlie) — and we’ve met several cats (the FBI, a Mexican cartel, another mysterious underground organization) but we’re not that much closer to understanding why the cats are chasing the mice than we were when the series debuted nearly two months ago.

The mystery of Mosquito Coast is why the Fox family is running, and the motives behind those who are chasing them. It’s an annoying mystery because even the kids — Dina and Charlie — are in the dark. It’s not that they don’t ask every so often, but their parents always offer the same response: “Not now. We’ll tell you later.” After seven episodes, all we know now — after the season finale — is that Margot committed the act for which they are now fugitives on the run.

This proves to be problematic for Margot (Melissa George) because it is Allie (Justin Theroux) who is so committed to running. Margot, it seems, would be content to remove the kids from danger by shipping the kids to her parents, but Allie won’t allow the family to be split up, even after their teenage daughter Dina (Logan Polish) rammed a police car to save her dad from arrest, and after Charlie (Gabriel Bateman) shot a man he rightfully suspected was after his family. The shooting led to Charlie’s arrest, and in this week’s finale, Allie and the rest of the family narrowly break him out of prison before the cartel catches up to them.

But we still do not know why the cartel is after them, or why Allie is so valuable to them that the cartel would shoot to death two FBI agents. The cartel would also be all too happy to kill everyone else in the family, except Allie, whom they have been instructed to bring back alive. Why? What’s so valuable about him, especially now that we know Margot is responsible for the crime that put them on the Most Wanted list?

Not knowing clouds the rest of the series, which is not unlike Breaking Bad or Ozark in its level of intensity, except that we know why there were people after Walter White and Marty Byrde. We have no idea why they’re after Allie Fox. We don’t know if he’s a good guy or a bad guy or a little bit of both. All we know is that Margot is slowly starting to resent him, while Allie may be slowly going mad. Like, really slowly, because Mosquito Coast has been renewed for a second season, and Theroux is hopeful there will be a third and fourth season, as well. If going mad is the endgame — as I understand it is in the book and Harrison Ford movie — there could be a lot of mysterious figures chasing the Fox family around Central and South America for reasons that may not be clear for quite some time.


← Get to Know Rina Sawayama Before Seeing Her Hunt Keanu in 'John Wick 4' | Review: 'The Conjuring: The Devil Made Me Do It' Is Bad In A Concerning Way →