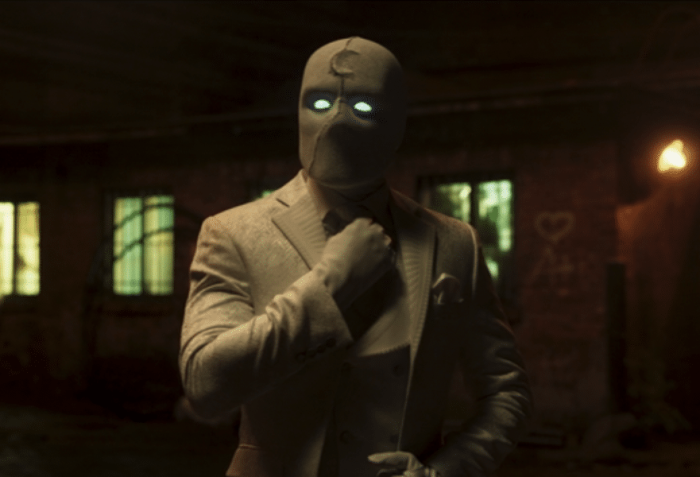 Hey, so remember how last week’s episode of Moon Knight ended with Steven SURRENDERING THE BODY to “Marc,” who promptly transformed into Moon Knight and started beating the crap out of a giant jackal in the museum bathroom? Well, episode two picks right up on all that hot action with … Steven waking up in bed. Again. Only this time he knows something wonky is going on, and he’s determined to find some answers — which works out great for us because we’d also like to know what the eff is going on!

Steven heads back to the museum to try and piece together what happened after he transformed, and discovers that the monster he fought doesn’t appear on the security footage. Unfortunately, this means there’s no evidence to prove he was defending himself against an otherworldly beast and not just vandalizing his place of work, so he gets fired. But hey! At least now he has plenty of free time to spend investigating this “Marc” fellow! Steven takes that key he found in the secret cubby hole in his apartment and locates the storage unit it unlocks, which turns out to be Marc’s very sad bachelor pad. He’s got clothes, a cot, and a go-bag full of guns, money, and his U.S. passport (confirming that his full name is Marc Spector). Steven also finds the golden scarab and activates it, at which point Marc pops back up in a reflection and attempts to talk Steven down.

“Look, I don’t care how bloody handsome you are,” Steven humbly says to the man who looks exactly like himself, “Tell me what it is you ARE!”

Ahem. Marc (and, by extension, Steven) is the avatar of Khonshu, the Egyptian god of the moon, and his job is to “protect the vulnerable and deliver Khonshu’s justice to those who hurt them.” Marc made a deal with the god and he needs Steven to stay out of the way while he upholds his end of the bargain. However, there’s more at stake in this deal than Marc is letting on. In a later conversation between Marc and Khonshu, we learn that Marc was “nothing more than a corpse” when Khonshu found him, and if Marc ever tries to walk away then Khonshu will be forced to move on to his next choice of avatar: Layla.

Layla (May Calamawy) is the woman who left all the missed calls on Marc’s cell phone — the same woman Steven spoke with briefly in the first episode. Turns out she’s Marc’s wife! Or, well, soon-to-be ex-wife? It’s complicated. She shows up outside the storage unit after tracking Marc’s phone, and she’s pretty annoyed to find him feigning a British accent while acting all weird and forgetful. Then she’s even MORE annoyed to find out that he’s got the scarab and kept it from her because apparently it’s something they’d been searching for together for a long time until Marc up and disappeared.

Steven is just beginning to convince her that he truly doesn’t remember any of it — that he isn’t Marc at all — when there’s a knock on the door, and some cops come to take Steven into custody. Only they actually take him to meet Arthur Harrow again.

Harrow does his overly congenial bad-guy schtick again in an effort to convince Steven to hand over the scarab, which is a compass that points in the direction of Ammit’s tomb. He needs it to resurrect his goddess so she can weed out evil before it happens, blah blah blah — we already got the gist of his big plan last week. What is new is the revelation that before Harrow became Ammit’s avatar… he served as Khonshu’s avatar, his “fist of vengeance.” This makes him the one person who doesn’t exist solely in Steven’s brain that Steven can talk to about his situation. Harrow can no longer see or communicate directly with Khonshu, but he can anticipate what the god is telling Steven to do (usually some variation of “kill him”) because he’s been through it before — and he claims that Steven doesn’t have to do everything Khonshu asks. Without the help of the avatar, all Khonshu can do is make the lights flicker and throw a few wind gusts around.

Harrow’s friendly info-dump comes to an end after he tries to convince Steven that Khonshu, who only punishes those who have already committed crimes, comes too late to do any good, and that’s why Ammit’s brand of preemptive justice is preferable. Steven gets a bit squeamish about Ammit killing children for crimes they might commit decades in the future, though, so the two men reach an impasse… and Harrow uses his avatar powers to summon another invisible jackal to chase Steven.

Steven, who has been refusing to relinquish control (SURRENDER THE BODY) to Marc all episode long, figures out something pretty neat about this whole avatar situation: He can summon the Moon Knight suit himself. Or at least a suit. Since he has never been conscious to witness what Khonshu’s ceremonial armor looks like, he manifests a very dapper three-piece white suit that Marc describes as “psycho Colonel Sanders.” Still, it gives Steven the confidence to punch that jackal right in the head — and it’s a tidy way to incorporate another character design from the comics. You see, Moon Knight only appears in the caped get-up when he’s in full-on vigilante hero mode, but there are other times when he consults on cases for the cops, and then he needs a persona that offers them a degree of plausible deniability. Enter “Mr. Knight” — who is just Moon Knight in a dapper suit, and everyone knows it’s Moon Knight in a suit, but they don’t ask any questions. The show seems to be giving Marc and Steven their own distinct superhero identities (Marc as Moon Knight, and Steven as Mr. Knight), and I’m looking forward to seeing how that plays out.

At any rate, Steven still isn’t much of a fighter, so when Layla and some innocent bystanders are in danger he finally lets Marc take over — and lets the real Moon Knight finish the job.

The Man In The Mirror

By the end of the episode, Harrow has recovered his scarab, which was lost in the scuffle, and Steven has lost his body, which Marc refuses to give back. The power shift means Steven is now relegated to being a reflection for the very first time, and Marc will have contend with Khonshu AND Steven yelling at him in his mind. Fun times!

Speaking of Khonshu, he’s very disappointed that Marc lost the scarab, but it’s cool because he knows what they need to do next: Beat Harrow to Ammit’s tomb. They’re going to Egypt, baby! And boy I bet Layla’s gonna be pissed when she realizes Marc/Steven has disappeared again!

— This episode was directed by Justin Benson and Aaron Moorhead, who recently helmed a few episodes of Archive 81 and have been tapped to direct the upcoming second season of Loki. Unlike the premiere, this episode was less about the action and more about the internal struggle between Steven, Marc, and Khonshu, and I thought they did a really good job finding ways to make that internal dynamic visually interesting on the outside. Marc breaking Steven’s reflection at the end of the episode was particularly well shot.

— Speaking of visually interesting, we get a whole lot more Khonshu this time, and not just his F. Murray Abraham voice. I’m obsessed with his character design — that giant bird skull manages to be expressionless and tired of your BS! Shout out to Karim El Hakim, who does the physical performance of Khonshu, which so far is a lot of lurking on rooftops and towering menacingly over Oscar Isaac.

— Can you have a love triangle when two of the three people share the same body? Because I know Marc is only trying to divorce Layla to protect her from all this Khonshu business, but unfortunately I am now fully invested in Steven’s awkward flirting! Did I melt a little when Steven declared “I would never divorce you” to the woman he has known for like 15 whole minutes? Yes. Let’s face it, the poor guy is never gonna get the hang of dating. Waking up one day and finding out he’s already married is probably the best possible option for him. Just let Marc do all the work in EVERY aspect of their lives!

— “Do you think Khonshu chose you to be his avatar because your mind would be so easy to break, or because it was broken already?” Harrow, coming right out with the million-dollar question! I’m looking forward to seeing Marc as the dominant persona because it’s clear he’s used to being on the inside looking out while that experience is brand new to Steven, who has never been conscious of the power shift before. Did Marc used to be the dominant personality, and did his near-death and resurrection change that?

- Was Mr. Knight wearing… mummy-wrapped loafers with his suit?!

- One last comic thing: The living statue performer that Steven keeps confiding in? His character name is Crawley, which is a reference to a character from the comics named Bertrand Crawley, one of Marc Spector’s allies and long-time informants. Another ally was hinted at in the premiere when Steven scrolls through the missed calls from Layla and sees one from “Duchamp” — a reference to Frenchie DuChamp, Spector’s partner and pilot.