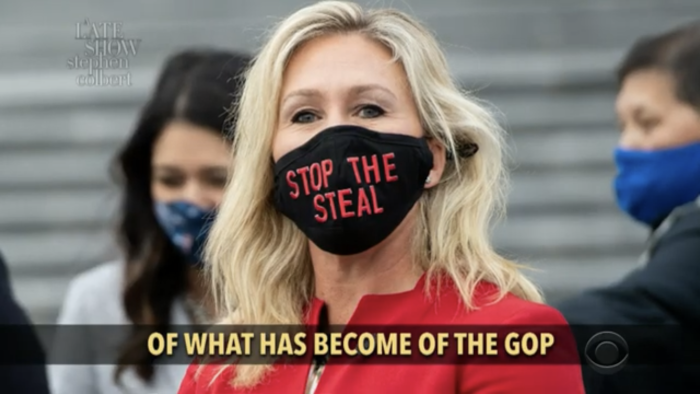 Parody songwriting is a fine art. There are a lot of moving pieces at work. You need musical talents, clever lyrics, and, in the case of the latest opening segment from The Late Show with Stephen Colbert, you need a subject worthy of mockery. For that, we have Marjorie Taylor Greene.

Greene is the absolute worst that the GOP has to offer. The mini-Trump is racist, xenophobic, anti-Semitic, and is a believer of the ridiculously stupid and dangerous QAnon conspiracy. I’m legitimately angry typing about her. However, the anger is clashing with my love of song parodies!

On the one hand, I’d rather not think of MTG ever again. On the other hand, “Valerie” (originally by The Zutons and then covered by Mark Ronson and Amy Winehouse) is an absolute BOP and the Colbert folks parodied it to perfection. Not only does the group covering it sound great (I’m assuming it’s John Baptiste and Stay Human) but the lyrics are smart and funny and tell you everything you need to know about the callous congresswoman.

Give it a listen, try not to laugh, and then spend several minutes wallowing in sadness at the notion that someone like this is not only an elected official but is openly embraced by her party.