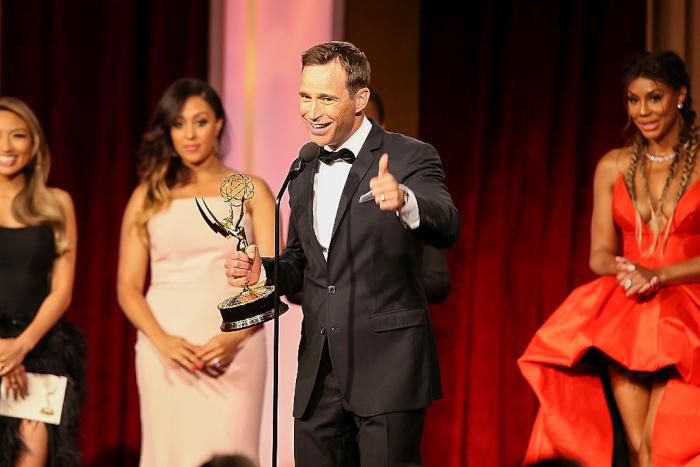 It turns out that shamelessly appointing himself the new Jeopardy! host is one of the least objectionable moments of Mike Richards’ career. Fresh off the news that he was sued for sexual harassment as a The Price Is Right producer, Mike Richards is making headlines for a podcast shared with journalist Claire McNear for The Ringer. The podcast, aptly titled The Randumb Show, was hosted by Richards from 2013 to 2014 and features multiple instances of sexually, ethnically, and racially objectionable speech. McNear’s deep dive is brilliant and honestly, nothing I can say will measure up. Some of the worst of it is here but please do yourself the favor of reading the whole thing.

There are multiple conversations in which Richards makes remarks about Triffon’s height and appearance. He repeatedly calls her a derogatory term for little people, a word that he also uses to describe the actress Kristin Chenoweth. (Both that word and the R-word, which Richards uses in a January 2014 episode, are considered slurs.) In the podcast’s third episode, Triffon discusses some acting roles she has auditioned for; Richards says she should try out for Taiwanese roles because of her height. In another episode, after Gray makes a nonspecific comment about big noses, Richards jumps in. “Ixnay on the ose-nay,” he says. “She’s not an ew-Jay.”

Richards also makes disparaging comments about Triffon’s economic status. During an episode in which Triffon discusses problems at her apartment, he says, “Does Beth live, like, in Haiti? Doesn’t it sound like that? Like, the urine smell, the woman in the muumuu, the stray cats.” In another episode, Triffon talks about losing her job and says she qualified for unemployment insurance benefits totaling $389 per week. Richards says, “The dangerous side about the crack that you just took is that not everyone is like you. But everyone can collect unemployment, which is why we have so many people on unemployment right now. Which is why we have so many people on food stamps. Because what if you got unemployment and food stamps? You’d be like, ‘Good lord, I’m making—.’ You know what I’m saying?”

This is from the same man who — as The Ringer reports — also accepted nearly $300,000 in PPP loans and COVID Emergency funds for a company in which he was the CEO and sole shareholder. And he complained in one podcast episode about his co-host giving $1 to a homeless person because she might use it for crack or meth.

Mike Richards is cooked. He made a mealymouthed apology that reads, in part:

“my responsibilities today as a father, husband, and a public personality who speaks to many people through my role on television means I have substantial and serious obligations as a role model, and I intend to live up to them.”

It’s the same nonsense said by every man caught saying terrible things about women. But with the added Anti-Semitic and racist quotes, I don’t see how he keeps his host role unless Jeopardy! moves to Fox and broadcasts right before Tucker Carlson Tonight.