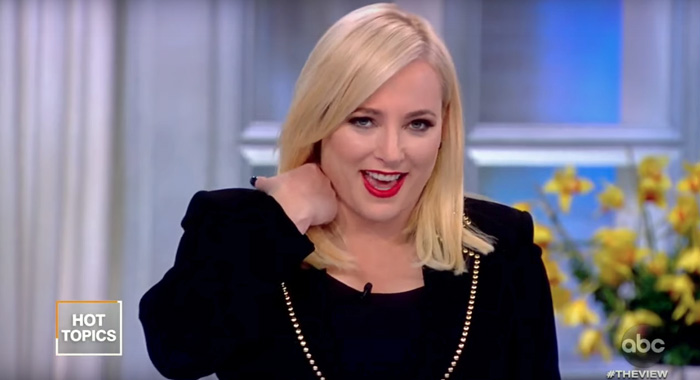 As Claude noted in our Slack, it’s been a rough month for middle-aged guys with axes to grind, because not only did NBC take away my beloved Manifest, but it appears as though Mike will lose his pop-culture nemesis today, as well. The media folks are reporting that Meghan McCain is quitting The View.

Granted, this news comes originally from The Daily Mail, which is not exactly known for its accuracy in reporting. However, the conservative outlets Fox News and the New York Post ran with it. It’s being reported (by these conservative-friendly outlets) that McCain will announce her decision and explain why on the show today. They also reiterate that it was her decision, which leads me to believe that the report is true, because McCain and her people would definitely want that to be known.

We’ll never know the real story …. for at least two weeks, when Joy Behar overshares on an episode of The View. McCain — who has moved closer to a Trump Republican in recent months (perhaps due to the influence of her husband, Ben Domenech, co-founder of The Federalist) — still has two years left on her contract and insisted repeatedly earlier this year that she wasn’t going anywhere. Nevertheless, she is expected to leave at the end of July.

Let’s all pour one out for Mike Redmond, who has lost his pop-culture muse. I will miss the perfectly captured screenshots the most. A goddamn work of art.

← Jane Levy Did Not Care for the Insinuations of Her 'Don't Breathe' Director, Fede Alvarez | The OG Aunt Viv Had Words for Clair Huxtable After Bill Cosby's Conviction Was Overturned →