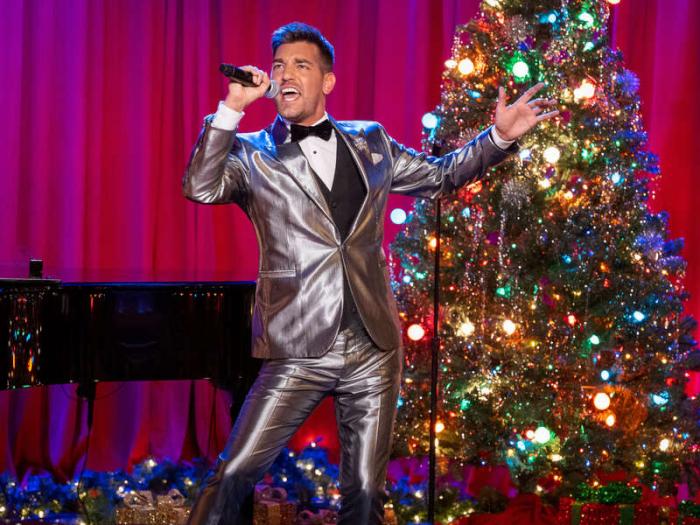 'Matt Rogers: Have You Heard of Christmas?' Is the Moment

In his debut special Have You Heard of Christmas?, writer, actor, comedian, podcast host, and first-time popstar Matt Rogers (I Love That For You, Las Culturistas) vies for his most ambitious role yet: Prince of Christmas. Trademark case be damned, Rogers offers up this special at the altar of Mother Mariah, less-than-humbly asking for her blessing to join, as he put it, “the pantheon of Christmas royalty.”

Recorded at Joe’s Pub in New York City and now streaming on Showtime, the hour-long special combines Rogers’ cabaret-style performance of nine original Christmas songs (You heard that right. Nine!) with sketches about the PR machine behind Christmas campaigns. The songs and sketches work together to chip away at the contemporary Christmas machine’s glossy red veneer. It is an hour of queer Christmas magic from the comedic perspective of a cynical and sexy pop diva, aiming to synonymize himself with “the season” for the rest of his life.

Playing a character self-described as a “popstar in their Christmas Era,” Rogers seduces his audience (and now viewers) with a wink and nod before accidentally-on-purpose exposing the commercial pervasiveness of Christmas within us all. The titular song, ‘Have You Heard of Christmas?’, ruminates on why people on the street are so grumpy considering something as magical as Christmas exists, before launching into Rogers’ increasingly confused definition of what Christmas is: “Have you heard of Christmas? / Santa and Jesus they were best, best friends / They knew each other way back in college at Bethlehem / They knew each other like ooh - ooh - ohhh.”

Rogers pokes (and often high kicks) at the cracks in the foundation of Christmas with songs like ‘Also It’s Christmas’, an upbeat and increasingly horny album opener about what happens when Christmas interferes with your otherwise scheduled activities (the club, sex, being gorgeous). His cynical-diva-playing-earnest-tinsel-and-holly-devotee knows sex sells and is going to Get. His. Slice. How does Santa fit all those presents in his bag, for example? Rogers, cranking the sexy-holiday dial to full blast, answers frankly: “Lube.” (‘Lube 4 The Sleigh’). The performance of Christmas sexuality is, of course, another layer to appreciate while basking in the glow of his Versace suit.

Pressing pause on his own diva persona midway through the special, Rogers sings a (fictitious) song he tells us Mariah Carey wrote for How the Grinch Stole Christmas (before it was ultimately cut in favor of ‘Where Are You Christmas?’): ‘Hottest Female Up in Whoville’ is Carey’s ballad from the perspective of Martha May Whovier as portrayed by Christine Baranski, or, as Rogers describes her, “a MILF without kids…The only single adult woman in all of Whoville”. The song touches on everything from Ms. Whovier’s relationship with men (“I’ma absolutely f*** the Grinch”) to her relationship with her own femininity (“Something that I desperately crave is female friendship / If you actually think about it my situation is very sad”).

‘Hottest Female Up in Whoville’ is a shining example of Matt Rogers’ comedy. First, you watch him writhe around on a piano singing about being the only sexy Who in Whoville and laugh. Then you realize he’s doing a loving impression of early-2000s Mariah Carey (product placement and all), whom he thinks would have felt a kinship with the equally sexualized and isolated holiday icon, Martha May Whovier. If you let his disco tux and nostalgic performance style distract you, you might miss it… But even Rogers’ comedic persona, cynical diva doing emotional Christmas drag, points his audience toward the real target of his jokes: The all-encompassing reach of the Christmas industrial complex.

The special is sexy, silly, and dumb the way Kristin Wiig is in “Liza Minelli Tries to Turn off a Lamp”. At its core though, Have You Heard of Christmas? is about the ways we perform Christmas. What’s expected of us, Christian or not; What we expect of others; and, How we are expected to feel. By dialing specific Christmas performances up past the point of being socially acceptable, Rogers exposes just how weird it is, for example, that a giant tree is a popular tourist destination (‘RockafellaCenta’) or the way corporations and celebrities use Christmastime charity for press. When he addresses the best part of Christmas (his family), it comes with an asterisk: his family…as long as they keep buying him presents, plane tickets, and paying off his Verizon bill.

Watching the special, you can almost taste what his album’s press cycle would look like: the “embarrassing” family stories for late night, the Macy’s Thanksgiving Day Parade performance, the morning show circuit, paid TikTok promotion, an Architecture Digest tour of his festive “Malibu bungalow,” some kind of the Queen has tea with Paddington style viral stunt (maybe prepping for Christmas with Macaulay Culkin? Or, stoke the discourse machine by having him jump off of Nakatomi Plaza with Bruce Willis?). The press opportunities are endless for a star unabashedly trying to associate himself with a season.

Have You Heard of Christmas? is not only one of the best comedy specials of 2022, it is a delight that will make for a marvelous addition to traditional and non-traditional holiday entertainment, no matter the irony, for years to come.


← Review: Just Let Me Look At Olivia Colman, 'Empire of Light'! | 'Spoiler Alert' Will Have You Crying Under the Mistletoe →