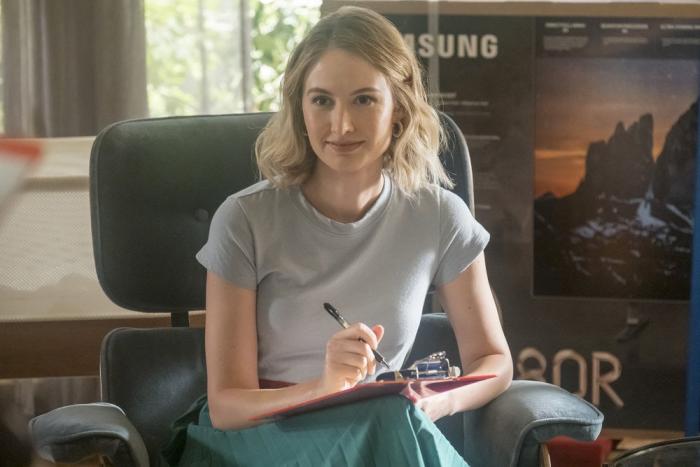 Madison or Sophie? Why Is that Even a Mystery on 'This Is Us'?

We know that in the fifth season premiere of This Is Us, Kevin will be turning 40, and he’ll be seen in the family cabin with his fiancée, who will be pregnant. What we don’t know is who his fiancée will be. As of now, the possibilities are Cassidy, Zoe, Madison, and Sophie. Zoe doesn’t want kids, which probably rules her out. Cassidy has a kid of her own, which doesn’t exactly rule her out, but it makes the show logistically more complicated.

The frontrunners at the moment are Sophie, Kevin’s ex-wife with whom Kevin was involved again a couple of years ago (before running away) and Madison, who is Kate’s best friend (the actress who plays her, Caitlin Thompson, is also the wife of showrunner Dan Fogelman). In this week’s episode, after Kevin returned from the funeral of Sophie’s mom, Kevin ended up sleeping with Madison, whose boyfriend had just dumped her. At that funeral, Kevin experienced another deeply emotional connection with Sophie, who is engaged to Grant, a faceless character we have never met.

The conversation surrounding Kevin has converged on Madison and Sophie as the two most likely possibilities in Kevin’s romantic future. Who will it be?

This is a dumb question.

I have seen every episode of This Is Us, and with all due respect to Caitlin Thompson, when her character Madison appeared in last night’s episode, I had no idea who she was. She’s been in 15 episodes of This Is Us. I literally have zero memory of that. I have scanned screenshots of her on the show, and I still have no recollection of her. It feels vaguely like the Mandela Effect, only I have been living in the universe where Madison did not exist on This Is Us until last night. It’s like watching Survivor, and sometimes around the midway point in each season, you notice for the first time a player who has been there all along.

Point being: She’s not a particularly memorable character, and you don’t pair one of your leads with someone who doesn’t leave an impression, particularly a bland best friend character with whom Kevin has never had much rapport. Madison is clearly a one-night stand kind of character who provokes a single-episode skirmish between Kevin and Kate that is forgotten by the next episode. That’s it. This isn’t going to be a long-lasting relationship. Also, Dan Fogelman ruled it out two years ago, anyway, and while it is true that Kevin and Madison slept together on the show, it was off-screen, so that doesn’t count.

Just FYI: Madison is my wife in real life @CaitwithaC

And if you thought I was letting her sleep with @justinhartley on national television you're nuts. #ThisIsUs

Now Sophie, on the other hand? She’s been a fixture on this show in three-time periods, there’s considerable history and chemistry between her and Kevin, and their re-marriage would make for much better TV than “Kevin started banging Kate’s best friend.”

This is not a close call. Look: If you introduce a symbolic, unused wedding ring in the first act, it will always be used in the third act. It’s called Checkhov’s ring. Look it up. It’s a real thing. Even if the storyline wasn’t obvious, that ring gave it away. Sophie’s mom tells Kevin that he has to “earn it” before he can give it to Sophie. Cut to 25 years later, and Sophie is still not wearing it, because her existing fiancé hasn’t “earned” the right to let Sophie wear it, either. That’s not a thread you leave hanging. Obviously, Kevin is going to earn the right to give that ring to Sophie, and obviously, they are going to have a child together and spend the rest of their lives watching Good Will Hunting, because that’s always how it happens in television shows, except for Winnie and Kevin on Wonder Years, and that makes me too sad to even think about.

← A Nagging Question About Season One Of 'The Mandalorian' | What Happened In The 'Emergence' Season Finale? →