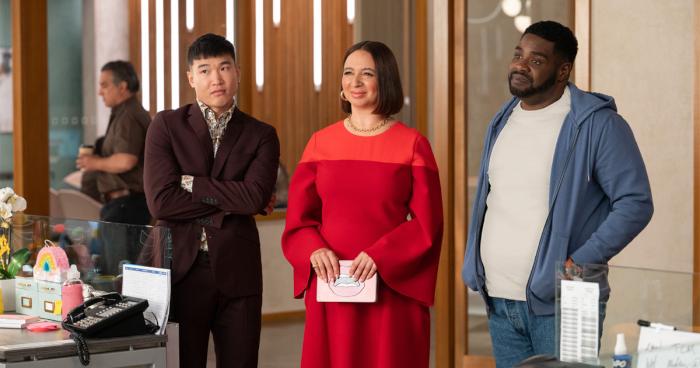 I can tell you what Apple TV+’s new comedy Loot aspires to be. It wants to be a workplace comedy like 30 Rock, where Maya Rudolph plays both the Jack Donaghy character and the Jenna Maroney character at the same time. It also wants to be a sort of Good Place that examines wealth and the responsibility that obscenely rich people owe to the world. There are also elements of fish-out-of-water and upstairs/downstairs-type comedies tucked into it, too.

Alas, it is decidedly not that. It lacks the rapid-fire jokes and razor-toothed satire of 30 Rock, its examination of wealth is superficial, and the upstairs fish barely feels out of place because she has seven swimming pools in her palatial home and a staff of hundreds to tend to her ego.

It doesn’t mean that Loot is bad — it’s not — it’s that it feels more like a modest workplace sitcom that belongs on NBC instead of a streaming network that charges its subscribers to watch. As bonus content for those who subscribe to Apple TV+ for superior shows like Severance, Ted Lasso, or For All Mankind, it’s nice. It is not, however, a reason to subscribe.

Maya Rudolph plays Molly Novak, a character inspired by MacKenzie Scott, the wife of Jeff Bezos. Novak’s billionaire husband (Adam Scott) divorces her for a younger woman, but Novak gains an obscene amount of money, property, and even companies in the divorce. She takes a special interest, though, in a charitable foundation she didn’t realize she even had and decides to devote herself fully to it. This means working with a bunch of modestly paid employees and their hard-charging, ambitious boss, Sofia (MJ Rodriguez), who is intensely devoted to the cause.

It plays out in mostly predictable ways. Molly wants to be helpful, but her celebrity often gets in the way before her money bails her out. She learns how to relate to the plebes, while the plebes — as her employees and increasingly her friends — get the occasional taste of her wealth. It’s genial and fitfully amusing, although never riotously funny and rarely insightful.

It does, however, boast a tremendous supporting cast who both elevate the material and still feel imminently wasted. As the director of the foundation, Pose’s MJ Rodriguez is almost a parody of a certain dictatorial style of management, but she predictably softens at the end of every episode when she realizes that Molly’s money and good intentions are worth the hassle of having a celebrity disrupt her office. Joel Kim Booster (who wrote and stars in Fire Island) plays Molly’s diva-like assistant who forms an unlikely but heartwarming bromance with a “basic” character played by Ron Funchess (Funchess, as always, is a delightful presence). I look forward to their increased screentime when Loot invariably dissolves from a Maya Rudolph series into a true comedy ensemble.

The Jim/Pam, Ross/Rachel of the series is Molly and Arthur (Nat Faxon), an endearingly square accountant with a teenage daughter. Molly and Arthur, still in the platonic stage, are sweet together, but there are complications: She’s his boss, and she’s also about $87 billion richer than he is. Obviously, they will still eventually get together.

Ultimately, Loot is a fine show, and given the dearth of light, half-hour comedies (especially during the summer months), it’s a welcome one. It’s a show that I will probably continue to watch for as many seasons as Apple TV+ is willing to pay to make it. Given the talent in front of the camera, as well as behind it — it comes from Alan Yang (Parks and Rec, The Good Place, Master of None) — it’s still disappointing that there is this much talent behind so little depth.

← The Pajiba June 2022 Book Recommendations Superpost! | Spoilers: The Shake-ups At Netflix Better Not Cost 'The Umbrella Academy' Its Fourth Season →